There have been several alarming reports in recent days of people nearly dying and having their hands, feet or limbs amputated after developing a group A Streptococcus infection: A Nova Scotia woman landed in the hospital just days after giving birth earlier this month and had to be put in an induced coma as a result of an invasive group A strep infection.

Last month, a 28-year-old Manitoba mother had both legs and her right arm amputated after contracting a similar infection.  A Pitt Meadows, B.C., woman was told her hands and feet had to be amputated after she became infected with invasive group A strep. A Mississauga girl will lose part of her left arm and right leg after a strep A infection the doctors initially thought was a run-of-the-mill case of the flu, the CBC reported. And in Michigan, doctors had to amputate the feet and part of both hands of a 33-year-old man who became infected by group A strep.

Public-health officials say cases of invasive group A strep do appear to be on the rise, but they also say they are monitoring the situation and that there's no reason for the average person to worry. Here's what you need to know.

Streptococcus bacteria are very common – so common, in fact, that it's just one of the kinds of bacteria that live on our skin "all the time," according to Dr. Bonnie Henry, British Columbia deputy provincial health officer. But sometimes, it can cause illness. Most people are familiar with strep throat, one of the more common forms of sickness caused by strep bacteria. But on occasion, the same bacteria can lead to very serious illness and death. Those cases are referred to as "invasive" group A strep infections because the bacteria infects a part of the body that you wouldn't expect, such as the blood, lungs or soft tissue, Henry said. It can enter the body through a cut on the skin or from the throat.

In about 90 per cent of cases of invasive group A strep, patients will recover after being treated with antibiotics, according to Henry. But in a handful of cases, the bacteria can lead to serious, life-threatening complications like toxic shock syndrome and necrotizing fasciitis, commonly referred to as "flesh-eating disease." These serious complications occur when the bacteria secretes a toxin that can enter the bloodstream or cause damage to the tissue surrounding it. Patients with necrotizing fasciitis have to have surgery to remove the damaged tissue, which is why some individuals lose hands, feet or limbs after being infected with invasive group A strep. In those serious cases, antibiotics don't help because the medication doesn't affect the toxin, Henry said.

Although doctors aren't entirely sure why certain people are more prone to severe invasive strep A infections, they do know that people with compromised immune systems are more likely to be affected.

Two provinces say the number of cases of invasive group A strep are on the increase so far this year. For instance, B.C. has had 75 cases in the first three months of 2017, compared with the typical average of about 50 for that time period. Of those cases, about one-third have been severe and five involved necrotizing fasciitis, Henry said. She added that officials are actively monitoring the situation, but that so far, there's no evidence to suggest the need for panic.

"It is concerning, but it's not terribly unusual," she said.

Ontario had 91 cases reported in January, up from the five-year average rate of 71 cases. Dr. Alanna Fitzgerald-Husek, a public-health physician in communicable diseases at Public Health Ontario, said the uptick isn't causing any alarm and that officials are always monitoring cases to look for any worrisome patterns or changes.

According to Michael Gardam, an infectious disease expert based at Toronto's University Health Network, it's not surprising to hear about severe cases of toxic shock or flesh-eating disease linked to strep bacteria. The Public Health Agency of Canada says there were an average of 1,728 cases of invasive group A strep a year from 2011 to 2015, or about 4.9 per 100,000 people. That, Dr. Gardam notes, translates into "hundreds of cases a year in Canada."

"It isn't common," said Dr. Gardam. "But it is something that we see fairly frequently in the world of infectious diseases."

But many people are frightened when they hear about invasive group strep A infections because they come on so suddenly and can cause such severe illness in otherwise young and healthy people, he said.

The bacteria can be particularly deadly in healthy individuals because it triggers a major immune response. This, in turn, can cause blood pressure to plummet and organs to shut down, Dr. Gardam said.

"Their immune response just goes haywire," he said. "This is basically indiscriminate attacking of everything."

One possible explanation for the increase

Henry said officials have analyzed the new cases to see if there are any patterns, such as the emergence of a new, more virulent strain of the bacteria. So far, it appears as though the invasive group A strep infections are the same strain as usual, which is a relief. But it's still unclear why the number of cases are up compared with typical years. One possible explanation is the nasty flu season, which is just wrapping up. The flu can cause lung inflammation and pneumonia, which may make those individuals more vulnerable to invasive strep infections, Henry said.

Fitzgerald-Husek said the best way people can protect themselves is to wash their hands, cough into their sleeve and practice other common-sense good-hygiene habits. It can be difficult to tell when a person has an invasive strep A infection, as symptoms can resemble the flu. But Henry noted that illness tends to come on quickly, usually with a high fever, cough and severe fatigue. If a person's symptoms don't get better or worsen, they should seek medical treatment. 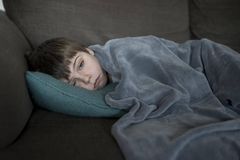 Study linking vitamin D to reduced cold and flu risk is too good to be true
February 17, 2017
Follow Carly Weeks on Twitter @carlyweeks
Report an error Editorial code of conduct
Due to technical reasons, we have temporarily removed commenting from our articles. We hope to have this fixed soon. Thank you for your patience. If you are looking to give feedback on our new site, please send it along to feedback@globeandmail.com. If you want to write a letter to the editor, please forward to letters@globeandmail.com.
Comments