Tom Knezic and Christine Lolley, the husband-and-wife team behind forward-thinking Solares Architecture, have finally put their money where their firm’s mouth is: an energy-sucking pig of a century-old home is now an energy-sipping, sustainable calling-card. 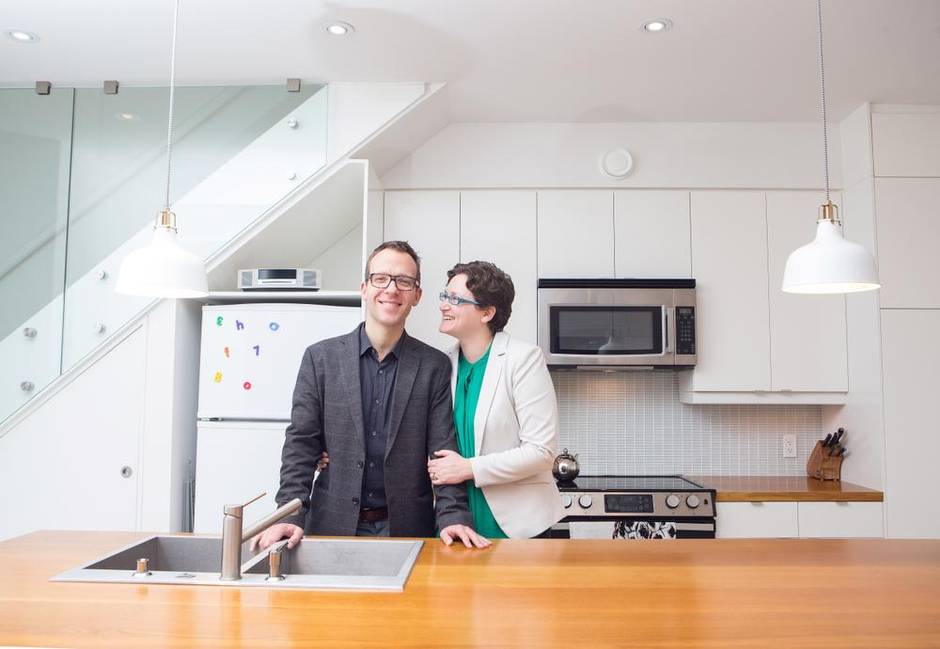 Photo by Jennifer Roberts for The Globe and Mail

But these green shoes didn’t come cheap. First, the parents to two young children, ages two and four, had to find a good candidate for a major gut-job in the super-hot Toronto real estate market for their “deep energy retrofit.” So, the search for architectural “oddballs” – properties that had been passed up due to dated interiors or awkward lot sizes – began in earnest. Since the couple is green in more ways than one, walking distance to their office at College and Dufferin streets would tick a necessary box. One promising property, a rough-around-the-edges but sturdy, detached home on Columbus Avenue near Sorauren and Dundas, had been sitting idle for a while. 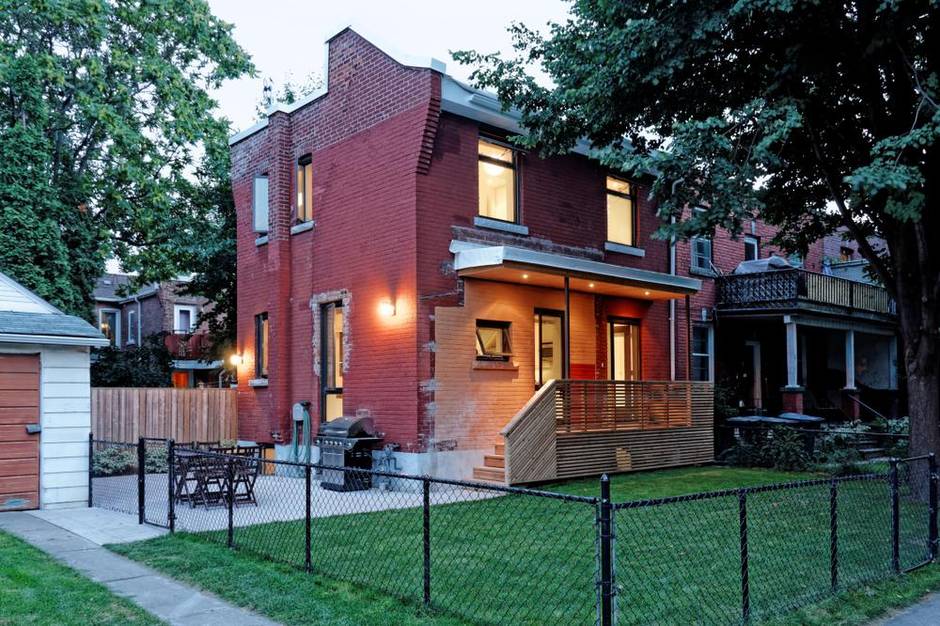 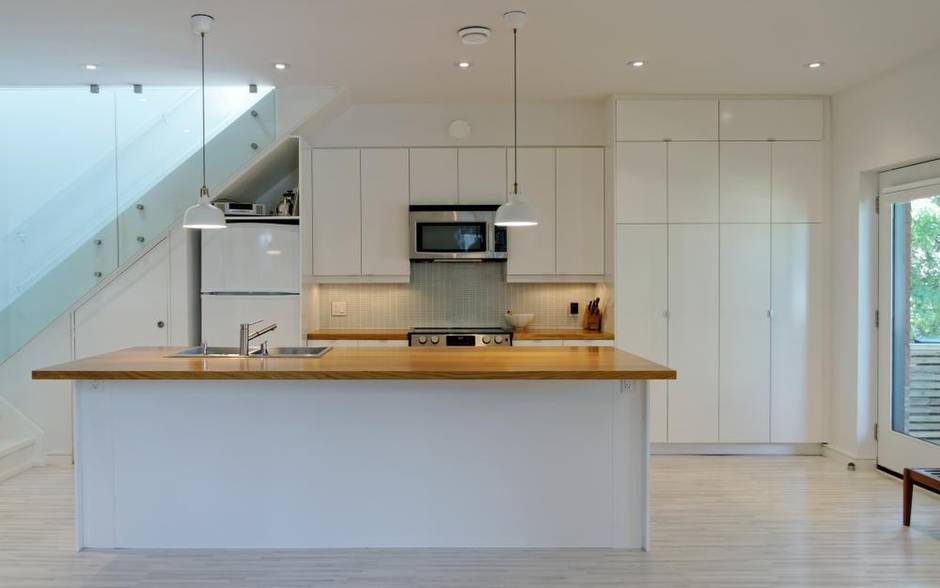 With pokey rooms on two floors totalling a paltry 900 square feet, a low-ceilinged basement, and a front and side yard rather than a backyard, the $750,000 price tag was unrealistic; however, when it was relisted at $700,000, the architects paid a visit.

Ms. Lolley remembers thinking: “It’s completely unrenovated, it’s completely original [and] it’s kind of ugly.” The original basement – which Mr. Knezic adds “had to smell dry” and, luckily, it did – meant they wouldn’t be dealing with “someone else’s underpinning” work. In other words, near-perfect. Add to the mix that the seller’s rather unorthodox tactics (no inspections of any kind, identification had to be shown to enter, etc.) had “spooked” potential buyers, and the couple was able to negotiate a final purchase price of $680,000.

Immediately after taking possession in July, 2013, an ecoENERGY audit was done. Scoring 38 out of 100, it wasn’t the worst building the couple had seen (this column profiled a Solares project that started at 18 and finished at 73), but it was bad enough that thoughts of swinging sledgehammers were at top of mind. By August, much of the interior was gone, the basement was getting lower, and Mr. Knezic was acting as general contractor, a tough job with a reno such as this.

To wit, after the six-foot basement was lowered to nine-and-a-half feet, a base of gravel with four inches of insulation was installed. This was followed by four inches of poured concrete with an in-floor radiant system. To super-insulate the new interior walls, 2-x-4 studs were placed an inch away from the brick, but at intervals of 24 inches rather than the usual 16 to reduce thermal bridging; once these were all up, spray foam was applied. 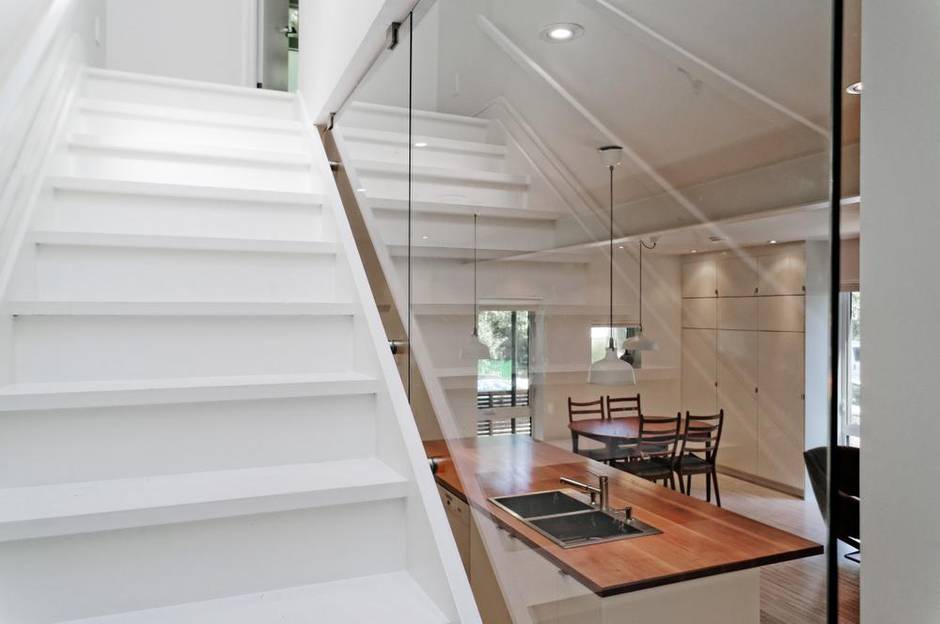 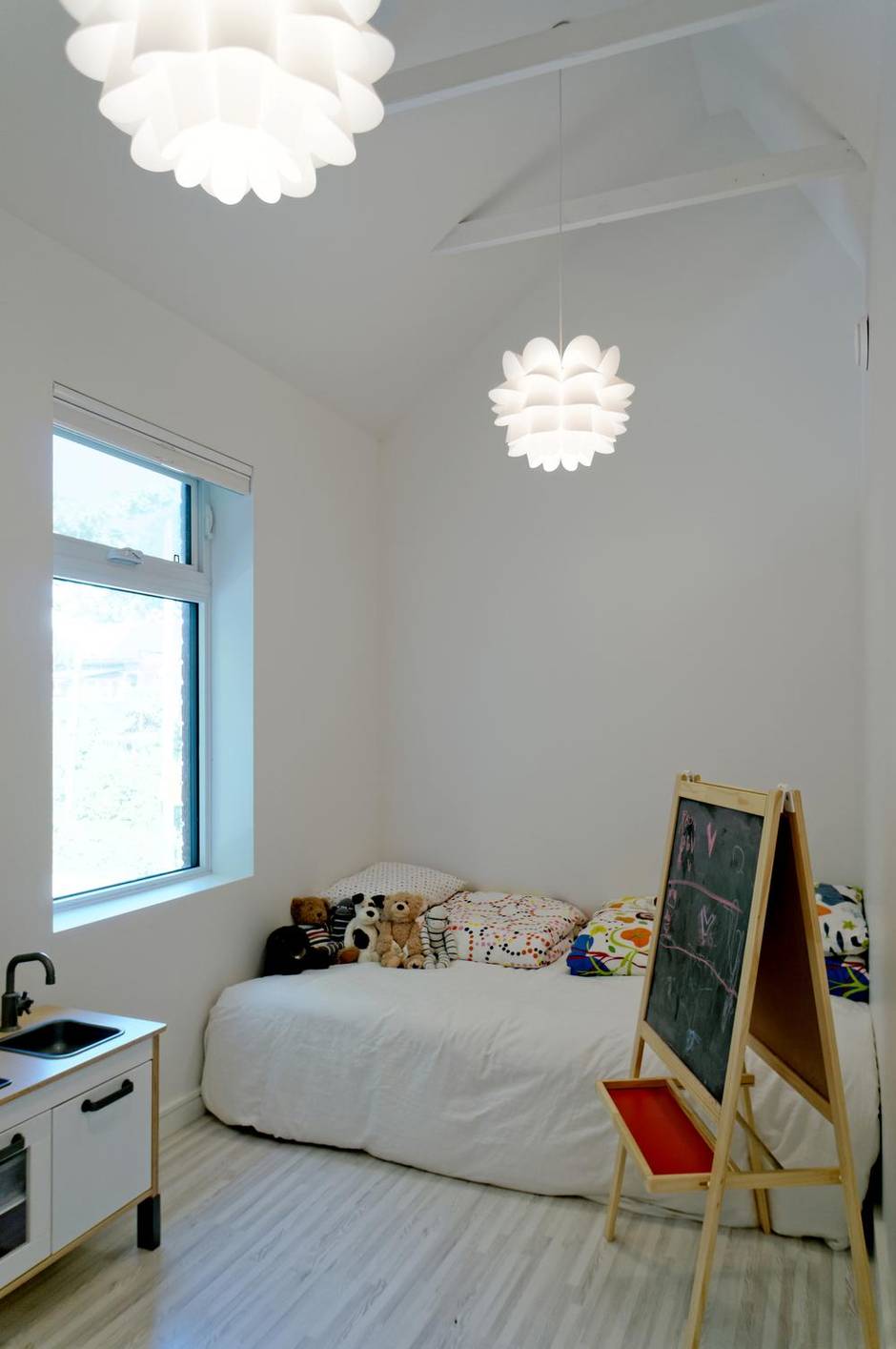 Six inches of insulation was added on top of the mostly flat roof (there is a little peak at front behind a parapet), and lower-density foam was applied between the rafters to achieve an R-value of more than 50. New triple-glazed, fibreglass windows were installed, as well as a skylight over the main staircase to the second floor (to combat heat-loss, a remote blackout blind was added). So electric lights wouldn’t have to be used during the day, the second-floor corridor received a solar tube.

Speaking of the staircase, it moved from its prime, front-corner location so the living room and kitchen could swap spots within the new, open floor plan – a steel beam overhead now carries the weight that load-bearing walls once did – and the front door traded places with a window.

Outside, a “weird, ugly, enclosed front-porch thing” was replaced by a slim platform shielded by a sexy canopy and the square-shaped lot was regraded and dressed with new sod and pavers. Since the couple hasn’t cleaned and repainted the façade yet, evidence of the ugly porch exists via various paint outlines and old beads of caulking; Mr. Knezic laughs and describes this as his “palimpsest,” the ancient practice of scraping away writing on parchment in order to reuse it.

To make this small home feel larger inside, white or wood surfaces prevail. Stepping into the front door, one notices that the large foyer closet is just an extension of the white Ikea kitchen cabinets. While the kitchen island is large, it acts as anchor, allowing the mid-century dining set and living room furniture the luxury of movement based on the number of house guests.

Only the second floor sports original walls, as Mr. Knezic and Ms. Lolley decided they needed a guest room – which doubles as a “winter playroom” – as well as a master bedroom and a bedroom for their two young children. The 400-sq.-ft. basement is rented out to a tenant.

“This is our five-year house, we can’t have big kids in this house,” Ms. Lolley explains with a chuckle. 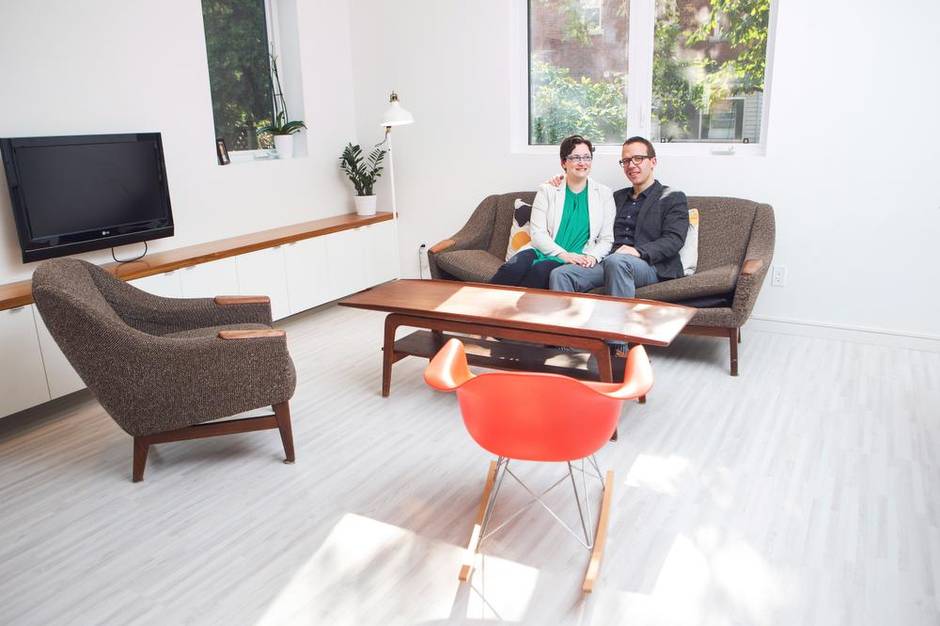 Interestingly, while in-floor heating is found on all three levels, cooling is handled by a ductless mini-split system fed into the tiny four-inch ducts that bring fresh air into the home. “So this is a ducted, ductless mini-split,” laughs Ms. Lolley. The unvented condensing dryer sends heat back into the second-floor space for further toastiness.

After a renovation cost of $320,000, the home now boasts an ecoENERGY score of 83, with an 84-per-cent reduction in energy use. Yearly greenhouse gas emissions have been trimmed from 22 tonnes a year (“That’s about 11 Honda Civics,” says Ms. Lolley) to six-and-a-half.

Best of all, Solares now has a sexy pair of Louboutins to show off: “We bring prospective clients through here all the time.”

To learn more about this retrofit, visit www.solares.ca/blog