The small residential building – bigger than a single-family home, not so grand as a tower – has an important role to play in the ongoing, necessary job of intensifying the world's cities. Here in Toronto, to name one urban centre with density on its mind, we've recently seen a welcome surge in the number of mid-rise condominium blocks being proposed for old districts, some of them architecturally better than just good enough. The effective ones, in fact, occasionally embody ingenuity of the kind that's too often missing from Hogtown's shiny new highrises.

Take, for example, the four-storey project called Leslieville Lofthouses, on a quiet corner in an elderly neighbourhood near the intersection of Carlaw Avenue and Queen Street East.

Large, regularly spaced rectangular openings punctuate the unadorned brown brick walls of the lower three storeys, bringing the structure's external appearance into line with the factories and warehouses nearby.

But the reference to industrial facades in the area is not timidly imitative. Rather, Mr. Popper has drawn on the good things about those rugged, workaday buildings from yesteryear – their simple, squared-off geometry, their no-nonsense practicality – then honoured such qualities in a plain and forthright modernist scheme.

It is certainly unlike any of the two-storey houses round about, but the contrast between modern and traditional on the streetscape is not jarring.

For the record: The building contains nine ample four-storey residential units, ranging in area from slightly more than 1,000 square feet to 1,700 square feet, and two small commercial spaces that are accessible from the street. Investors or end-users have already bought up all the apartments, though a two-bedroom suite, the architect told me, is currently on the resale market for about $540,000.

While I like the street-side presence of Leslie Lofthouses, the more interesting aspect of the complex, to my mind, has to do with what happens inside. It's in there that Mr. Popper has unleashed a little of the urban imagination we should be looking for in all mid-rise projects.

Here, for instance, is a way to provide off-street parking that doesn't make a decent downtown Toronto street look like suburbia.

Most suites come with parking, which has been carved out of the units' ground floors. But instead of giving every oversized garage a separate entrance – thereby cluttering up the façade with big, unsightly folding doors – Mr. Popper has routed the traffic through a single portal and along an interior corridor leading to the individual units. It's a neat, aesthetically pleasing solution to the problem of where (other than underground) to put the cars in a small building: You take them home.

Every garage is lit by a large, bright window facing a walkway or street.

This will make it easy for home-owners without cars to transform their parking spot into a well-lit workshop, studio or gym – a place, that is, with the knockabout informality of a basement, but without a basement's customary gloom.

More unusual than the parking facility, however, is the divvying up of territory in the apartments proper, which takes the old modernist notion of the "open plan" farther than I'm used to seeing it go.

One enters a typical three-bedroom or two-bedroom unit through a robust front door into a corridor that opens, off to the side, into the garage, and, straight ahead, to the staircase that takes the visitor up to the spacious main "living" level of the house.

The open plan on this floor is conventional, with a kitchen area at the rear and plenty of room for a dining table and a living room ensemble closer to the big, industrial-strength front window.

Continue up the staircase to the third and fourth levels, however, and you find yourself among the bedrooms, which hardly fit the routine condo mould.

In a three-bedroom layout I visited, the only one of the three that could be definitely shut off from the rest of the apartment was the master bedroom suite, on the third floor. Another bedroom, also on the third storey, was a sky-lit, double-height space open at the top to a fourth-floor loft that overlooked it.

This is clearly not a home for people (like most of us, I suspect) who want all our bedrooms firmly separated from each other. This is perhaps not a home for families of any sort.

But singles or couples who appreciate free spatial flow,

and who welcome the intimacy such a configuration invites – or who just like the idea of living in places that aren't ordinary – will probably admire Mr. Popper's fresh reinterpretation of the condo suite as much as I do. 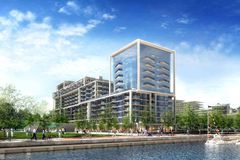 For Toronto condo, a famous name but a less than stellar plan
June 20, 2013 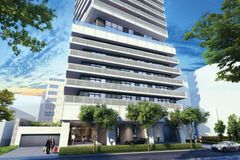