At the corner of 10th and Balaclava, in the heart of Vancouver's west side, two new houses stand tall. Part urban cabin, part neighbourhood intervention, the 1,600-square-foot house and its younger sibling, a 400-square-foot laneway home, read like residential installation art.

In this neighbourhood of traditional arts and crafts style homes, of pitched roofs, dormers and gables, the modernist grey-blue dwellings accented with bright orange, red and yellow are somewhat of a novelty. "We had about 1,000 people come by the first week we moved in," says the middle-aged owner, who, while not shy about sharing his house with curious neighbours, prefers not to be attributed in newspaper articles.

But while the pair of James Tuer-designed houses sharing a 40-foot by 80-foot lot may turn some heads, with the busy Broadway corridor a block north already sporting new mixed use buildings, they are a sign of things to come.

Mr. Tuer's residences – fashioned for a couple of empty nesters whose youngest child inhabits the laneway home – demonstrate that eco density can be green, affordable and well designed.

The designer, whose firm JWT was the recipient of the first ever AIBC Emerging Firm Award, successfully lobbied city hall to rewrite a bylaw that discouraged rainwater harvesting. Maximum energy efficiency has been achieved through high-grade insulation, passive heating and cooling methods are employed, and the homes will be certified Built-Green TM Gold. Furthermore, the main house was built on a budget of $550,000, while the laneway house cost a mere $150,000 and the landscaping (also by Mr. Tuer, somewhat of a multi-tasking design world boy wonder,) only $30,000.

But perhaps the most intriguing thing about the pair of homes is how they engage with the streetscape.

"Many modern homes in Vancouver," says the 46-year-old Mr. Tuer, "are built like fortresses – completely cut off from the outside world."

But Mr. Tuer, who says the corner lot off a laneway was a "gift of a site," celebrates the street with his design.

The streetscape around the house has been specially paved and planted with native species, automatically engaging passersby. The shed roofs of both houses tilt upwards to the north, embracing the energy of the busy Broadway corridor, while drawing attention to the sidewalk below.

And from the inside, a reciprocal gaze is at play. The eight-foot high window in the southwest facing corner off the living area gives a whole new meaning to the phrase "neighbourhood watch." At a diagonal, the corner kitchen window – a typology more commonly found in country homes rather than city residences – offers an ever-changing view of people and traffic. "It's like watching a river flow while you cook," says the owner. But thanks to triple glazing, insulation, and noise-buffering landscaping, it is a relatively peaceful urban waterway.

The view from the laneway – a grass-strewn road with blackberry bushes edged by tall firs – offers a hint of the rural (and perhaps what attracts the Bowen Island-based Tuer, who has also designed ski resorts in the interior, to the site). But a low concrete wall that straddles both houses, sleek lines and metal siding are undeniably urban. A landscaped inner courtyard offers a West-Coast Asian infused space that transitions between the two houses, as well as the two generations that inhabit them.

The entrance to the main house draws you in with Erickson inspired concrete stepping-stones and a warm tangerine door. A fir soffit that continues from the entranceway overhang into the interior – mirrored by another on the opposite end of the house that opens up into the courtyard – as well as extensive glazing throughout – offer a seamless indoor/outdoor aesthetic. Long narrow windows – the vertical played off by the horizontal – allow slices of the outside in, with framed views of the neighbouring wood-frame prewar house, and native drought resistant plants. The light from the glazing as well as the 11-foot ceilings amplify space in what is a relatively small square footage and footprint.

Mr. Tuer kept construction costs down by employing a simple palette of materials. The main level floor is mottled concrete, with recycled vertical grain fir flooring offset by face grain white birch on the second. A sculptural concrete fin that floats up past the stairwell to the second floor offers passive cooling as well as structural support.

The custom-made kitchen features counter tops of different heights designed for various functions – from juicing to bread slicing to vegetable chopping. And the layered view from the corner window – of streetscape, sidewalk, concrete wall, landscaping and glazing – is echoed in a variety of boxed windows set back from 10 to 24 inches. The layering continues with a zigzagging frame set back an inch from the stairwell, as well as in floating reveals throughout.

Upstairs, an east-west facing workspace – an artist's studio on one end and an office on the other – are offset by a light-filled master bedroom overlooking the courtyard – and a guest room fashioned with a cosy built in bed and the feel of a Parisian garret offers a space and face saving narrow closet with room for only three hangers (perfect for the short-term stay.) Skylights filter sunshine all the way down to the ground floor, while north facing glazing reveals a mountain view.

The open concept, loft like feel continues in the laneway home, inhabited by the owners' son and his girlfriend. The 400 square feet are maximized here to great effect with a south-facing living space with 14-foot ceilings, from which a stairwell extends into a built-in daybed, before coiling upstairs to the skylit bedroom. The kitchen area underneath engages directly with the streetscape. This is a true urban casita with a 10th Avenue address.

The girlfriend, a 20-something hipster recently relocated from Commercial Drive, says of her new hood. "There's not quite as much funk factor here, but for the first time, I can live in a place where I can walk to the sea. And a block north of here on Broadway, there's actually quite a lot going on."

And Mr.Tuer's little residential intervention, its roof sloped upwards towards a hopeful civic corridor, is a sly subversion of the suburban housing typology that dominates the area. Instead of picket fences and closed off walls, it offers engagement, interaction and inter-generational living. Something urban slouches slowly towards the corner of 10th and Balaclava, and it's looking pretty good. 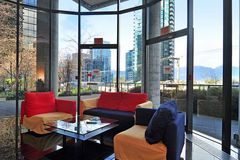 A plan to turn a former jail into rental housing
December 22, 2011 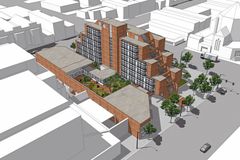 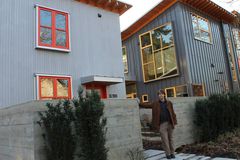