And they heard more requests: for a sense of freedom and room to let loose. "I'm at a stage where my kids are grown," says one of the clients, who have raised three sons in this house, near Casa Loma, over 17 years. "I don't have to do the grownup thing," she adds. "I don't have to have a living room and a dining room. I'd rather have a space to party."

She says this while sitting down to brunch with her husband and the architects in their new living-dining area, which – stretching the 36-foot width of the house, and lined by a row of tall, tailored glass doors – offers lots of partying space. But everything else about the room murmurs of serenity and quiet: a sea of beautiful white oak floors, the Minimalist sculpture on the white walls, and the warm light that washes out from recesses along the walls and ceiling. The husband explains that their thinking about the renovation was guided by one mantra: "Let's keep it simple," he says. "Let's keep the emphasis on light and space."

Those are the building blocks of architecture, and they are Atelier Kastelic Buffey's tools of choice. The Toronto firm, over a decade of practice, has established a clear approach to their house designs that achieves both serious architecture and domestic comfort. "We approach each project with the intention of using only the essential elements," explains Kelly Buffey, who runs the office with her husband and fellow architect Rob Kastelic.

They call this project Notan House, adopting a Japanese term for the juxtaposition of light and dark. What notan looks like, in this case, is the carefully orchestrated play of mass, light and shadow. In the large living-dining area, this is visible if you look carefully. AKB have designed subtle indentations – reveals is the term-of-art – where the walls meet the ceiling and floor. This has a potent effect: Notice it, and the walls are transformed into objects. "Shadow is a powerful tool for shaping space in an all-white environment," says Ms. Buffey, who served as the lead architect and the interior designer on the house.

As for light, the other half of notan , it is equally important here. Ms. Buffey explains that their work is influenced by the artist James Turrell. "His use of light to create unexpected experiences of space and perceptions of depth," she says, "has shaped our approach." And anyone familiar with Mr. Turrell's work will see the influence here. He is most famous for his "skyspaces," carefully proportioned rooms with ceilings that open, carefully and powerfully, to the heavens.

Notan house has two skyspaces of its own. One is in the master bathroom, on the second floor: A tub sits surrounded by massive hunks of Calacatta marble, and right under a deep, 24-foot-tall skylight that channels ethereal sunlight.

Above the central stair – itself a gorgeously detailed construction of white oak – there is a square skylight that brings ethereal wash of sunlight down into the house. How does it work? The edges of the skylight are not straight but taper to a knife edge on each side, so the material and light blend imperceptibly together.

Along the edges of the stair, invisible light fixtures – which also echo works by Mr. Turrell – are a subtle but important feature. These bands of luminescence make the weighty wood seem to float, providing a magical quality. This effect, created by AKB with lighting designer Marcel Dion, is repeated throughout the house: As you walk through the front door, you are embraced by a band of light that flows up the walls and across the ceiling. In the master bedroom there's one of these light strips behind the headboard; and in the living-dining area, light emerges from a set of reveals to light up a volume of wall.

There are also a series of other small points that generate subtle harmonies. Throughout the house, the architects have designed sliding doors that sit flush with the wall (and therefore disappear) when they're open. The motif of a square repeats at many scales, from the pot lights to the skylight to the volume of the building itself. Every detail appears perfect, thanks to extraordinary craftsmanship from builders Eisner Murray and, among the tradespeople, woodworkers MCM.

But all this isn't to say that the house, which retains roughly the same layout it had before the renovation, is empty. There is a lot of art in this 5,250-square-foot house – carefully selected by the owners, who have been collecting for decades. The wife, who works in real estate, is an art collector of note and the husband, who trained as an interior designer, is an illustrator and former graphic designer. There are photographs by Kristan Horton, a work on paper by Michael Dumontier, a witty photograph by Lisa Steele and Kim Tomczak – and strong sculptural works by one of the couple's sons. They all have found places. "We have a lot of opinions about art as a personal dialogue with the world," says the wife. "It's not about objects. I try not to fall in love with objects.

"But I do sometimes," she admits, "and I've brought some objects from before."

This is clearly a couple at the empty-nest stage, however, and paring back their houseful of possessions has given them pleasure. "We ask ourselves, 'What do we want to look at? How much do we want to see?'" the wife says.

The answer is, not too much – with the exception of the outside. The renovation added on a third floor with expansive windows to front and back. In front you can see Casa Loma and the downtown skyline; on the back, the long, deep garden, lushly treed in summer. Balconies extend the entire width of the house, and AKB extended the side walls of the house out to enclose them.

And, as Mr. Kastelic points out, the first floor avoids "the fishbowl effect, where all is open to view." There is a delicate balance, he says, of how much to open up the house to the street: "Here we do not have full height glazing, but rather from the sill height and above," he says. "This allows for a range of visual privacy from the outside, but a generous and open viewing experience from the interior."

Back indoors, another crucial decision was reducing the number of materials. Light-stained, rift-cut white oak, white walls and white Corian are present everywhere. "This allows for a more homogeneous and perhaps more abstract experience of space," Ms. Buffey says.

But all of these details raise a question of ideas about domesticity. Can a house be "abstract," "minimal," "simple," and also comfortable? This is a question that the mainstream of interior design is struggling with right now, establishing a new mainstream that balances "cold" white surfaces and elements of colour and stained wood, inevitably described as "warm."

"I would call it humane minimalism," says Mr. Kastelic. "Our field of experience is undergoing a deluge of data and information overload. This home offers a reprieve and solace for the clients – a place to recharge with the power of quiet and spatial calm."

And Notan House it the proof of that idea. This is a house to enjoy the shifting of the sun, to admire minimalist sculpture – but also to party in. 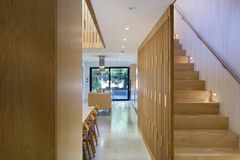 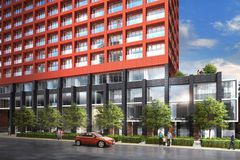 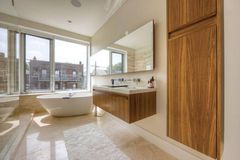