ROTTERDAM -- Imagine this: You wake up, shake last night’s dream away, stretch, and then look out the window, only to be greeted by a giant snail hiding behind a mushroom. Or, perhaps you spy a massive raspberry, shrimp and flower.

No, you haven’t fallen down Alice’s rabbit hole. Rather, you’re one of the lucky few who get to call Rotterdam’s new Market Hall home, and that colourful explosion of produce, grain, insects, fungi and a snail are your constant companions (there’s a cow, too). The largest art piece in the Netherlands, Horn of Plenty by Arno Coenen and Iris Roskam wraps the curving interior walls of the hall with such joy, you won’t want to hang curtains. 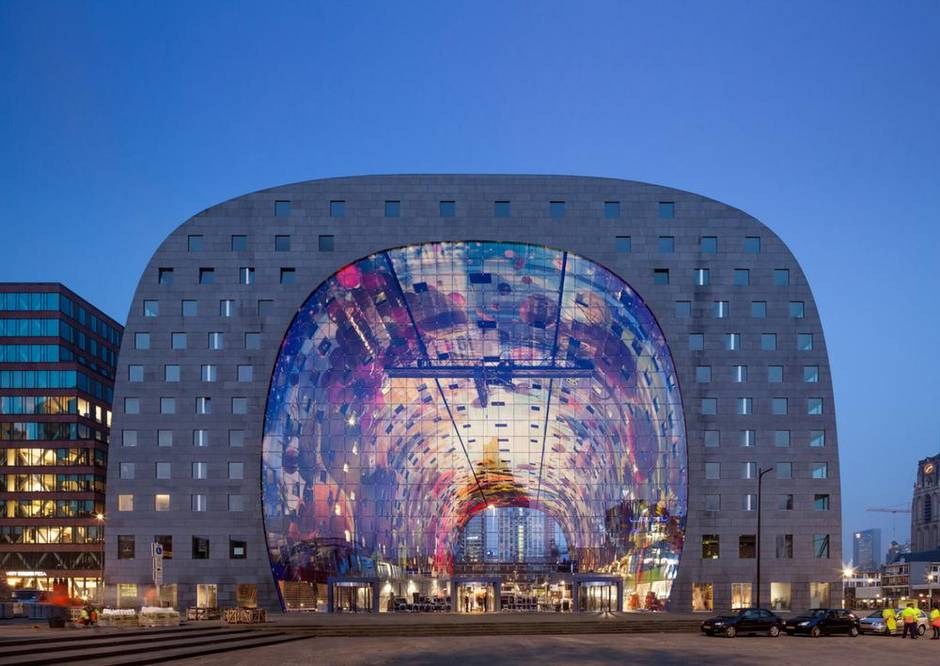 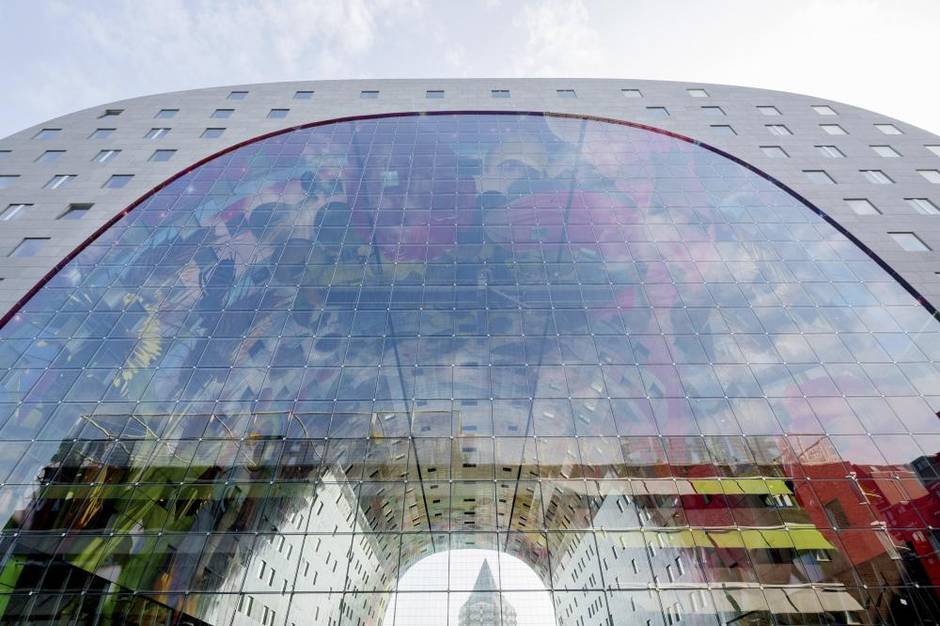 Opened to the public just two weeks ago, MVRDV’s Markthal is one of the most breathtaking food markets you’ll ever explore, and not just because of the surreal wallpaper. A long, horseshoe-shaped tunnel, both ends of the building are finished in soaring glass walls to allow light to rain upon the food vendors, as well as deep into subterranean levels; the thick exterior walls contain 228 apartments, most with sweeping views of the rugged port city.

In short, this is a piece of architecture that will quickly become a landmark for locals and visitors alike.

And, says MVRDV public relations chief Jan Knikker, it needs to be. Not only does Rotterdam long for even half the tourists that flock to Amsterdam (only 80 kilometres away), the historic city centre continues to work hard at shedding its 1980s reputation as one of the “drug hot spots of Europe” in order to rebrand itself as a safe, fun destination middle-class folk will live in, and, especially, shop in: “Because the Dutch people are not used to markets, there was this idea that this market needed to be bigger, but then it became a financial issue – how do we create a big building that is a market, but with the low rents that [vendors] will pay for the market-stalls?”

To complicate matters, the city’s 2004 competition brief called for rental apartments, condominiums and a significant number of parking spaces (1,200) as well as an enclosed market to complement the open-air one nearby. 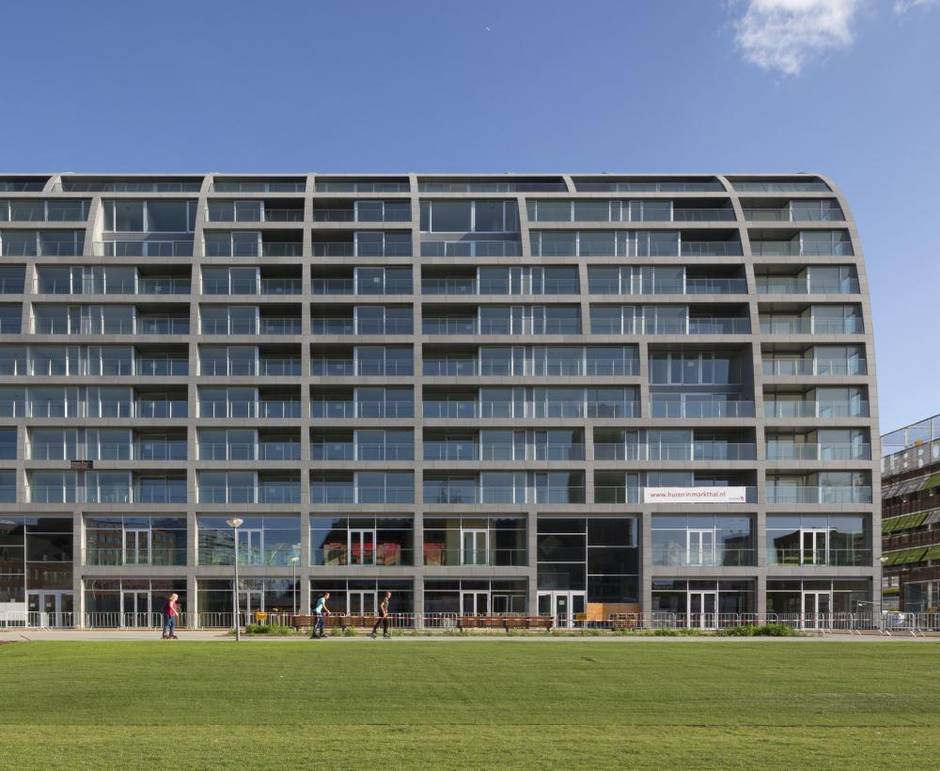 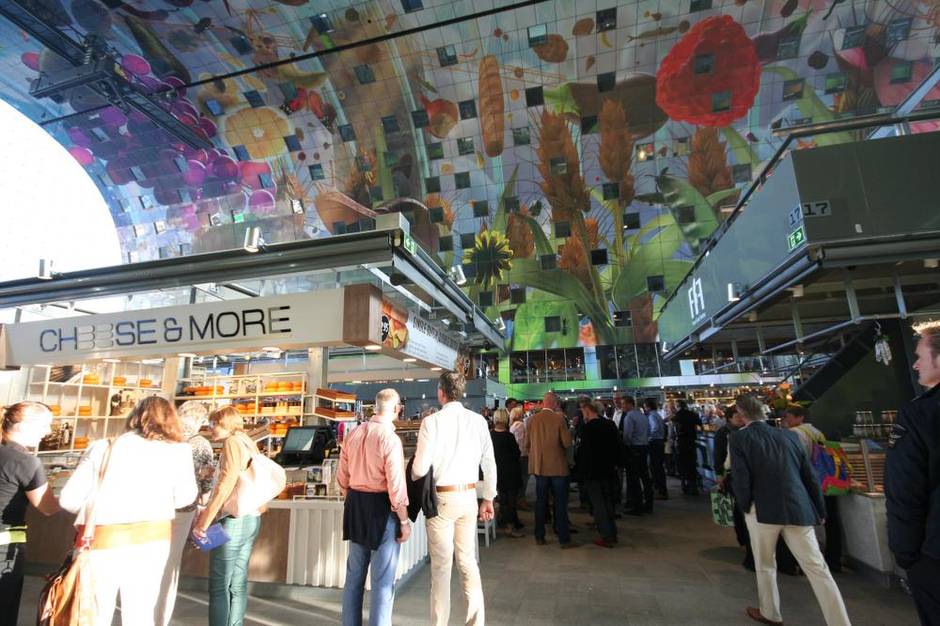 Eschewing the typical scheme of creating a separate building for each function, MVRDV’s solution rolled these requirements into one big architectural croquette, so the walls of the market itself contain the housing units, and all parking and loading is done underground and out of sight. This novel approach took first place for the Rotterdam-based architecture firm, established in 1993 by Winy Maas, Jacob van Rijs and Nathalie de Vries.

In addition to the 96 food stalls and 20 retail units on the 43,000-square-foot ground floor (for comparison, Toronto’s St. Lawrence Market is 50,000 square feet according to ERA Architects), Markthal also boasts a full grocery store on the lower level, a flexible “edutainment” space, and yet another art installation beside the escalators titled “The Time Stair,” where the deeper one descends, the more one learns of the site’s history via archeological artifacts found during excavation, video, and sound. 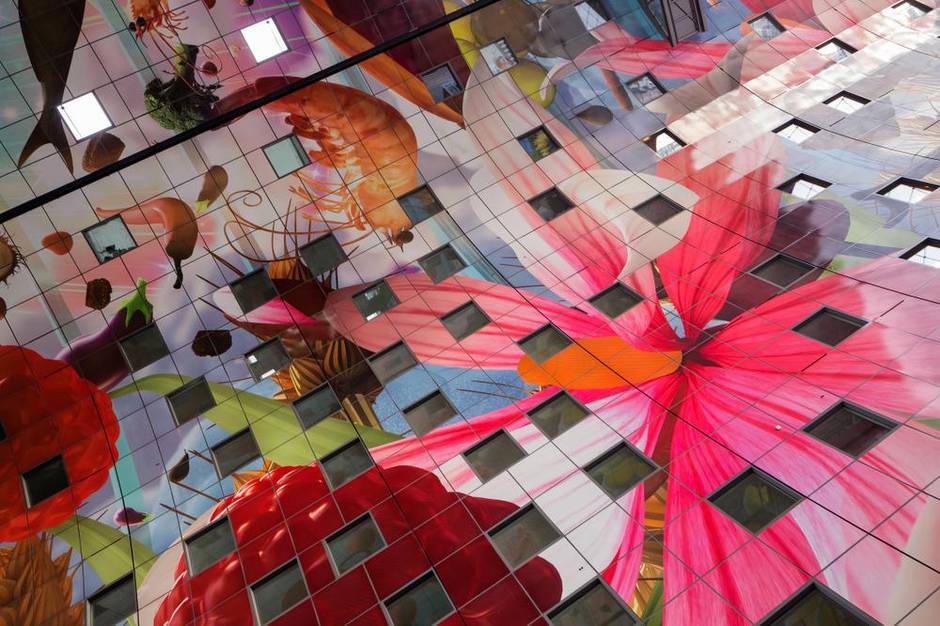 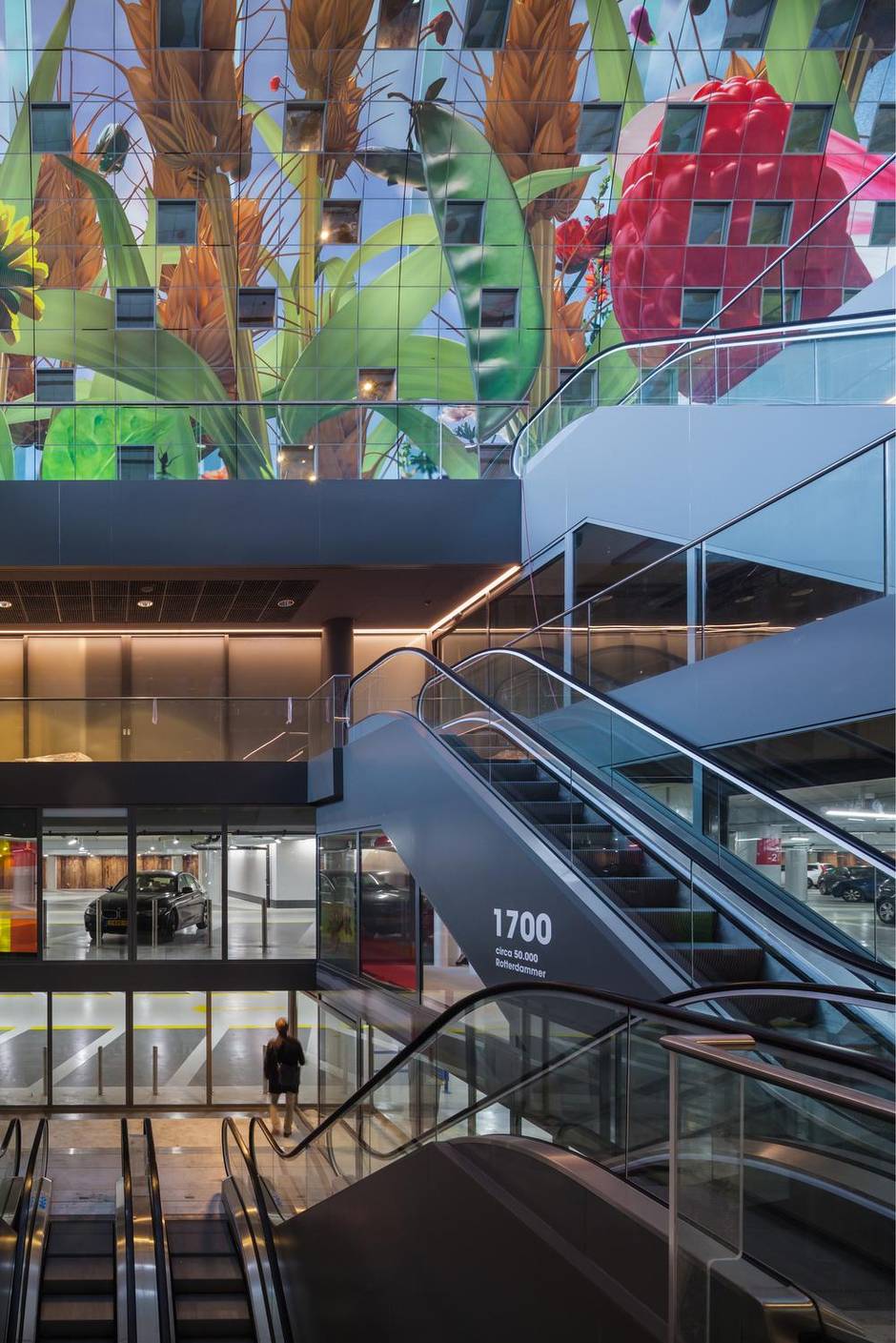 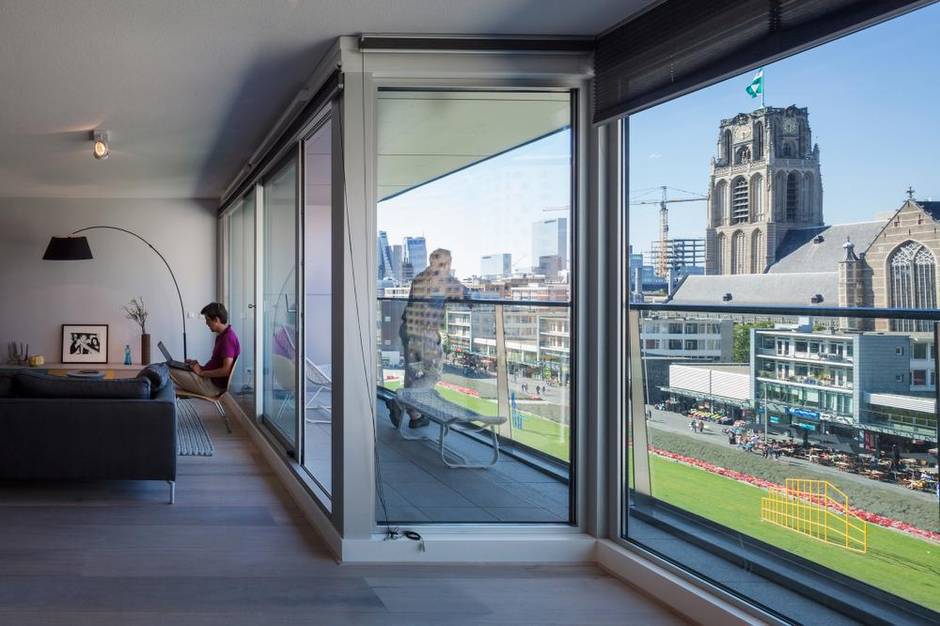 Because of its low energy use and passive ventilation system, the Building Research Establishment (BRE) awarded Markthal a “Very Good” certificate. In addition, tenants must sign an agreement promising green practices regarding water consumption, waste and the use of certified construction materials; some are already using their roofs for urban farming.

Housing units range in size from approximately 850 square feet to a whopping 3,200 square feet, and all have exterior balconies. Because of the raked roof, the 24 penthouses have expansive terraces and a price tag to match; your humble Architourist walked through a tastefully decorated 1,000-square-feet model suite on the fourth floor, and an empty $1.7-million penthouse so large it could pass for an art gallery. A highlight was the penthouse atrium with a small glass floor framing ant-like people 11 storeys below. Both units had gorgeous views of the medieval Laurens church to the north, and I’m sure most south-facing units must be able to take in Rem Koolhaas’s brooding De Rotterdam on Wilhelmina Pier a few kilometres away. 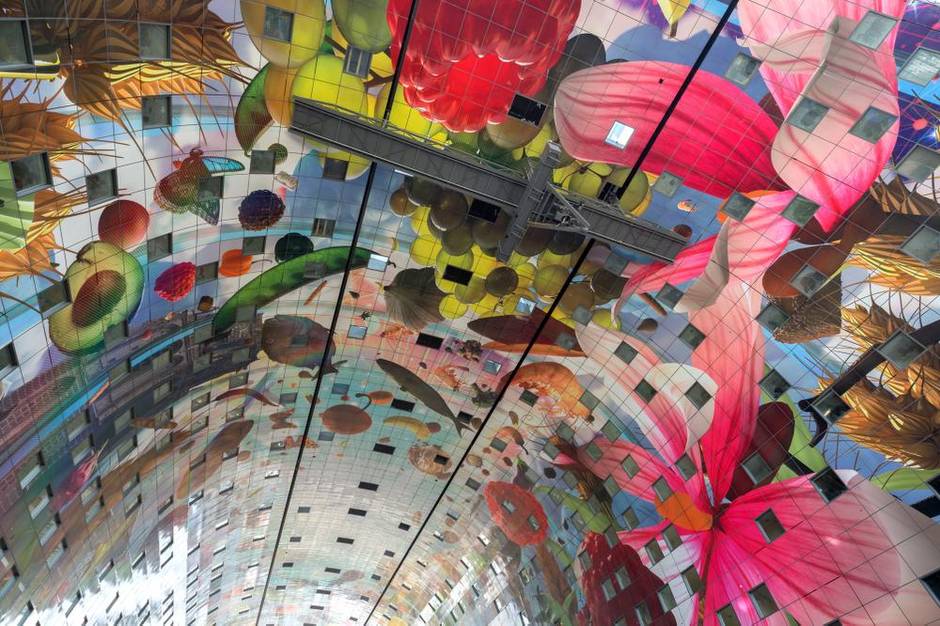 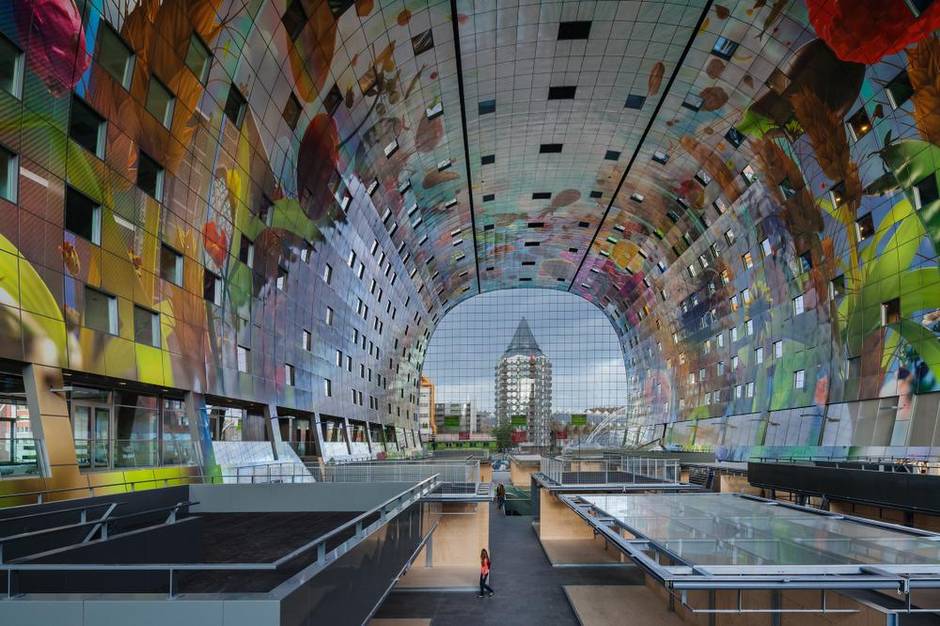 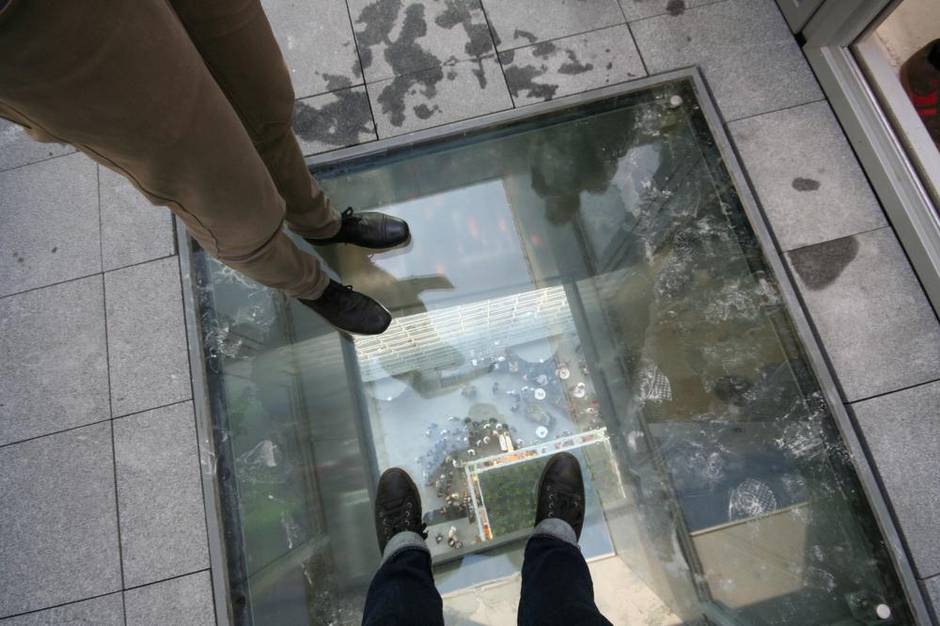 “A lot is happening in Rotterdam right now,” Mr. Knikker says, “and it makes the city quite livable.”

Which brings us to an even more livable city ... Toronto. When National Geographic awarded historic St. Lawrence Market “No. 1 food market in the world” in 2012, there were few chests that swelled larger than mine. Still, I wondered what was happening with the North Market building across the street. 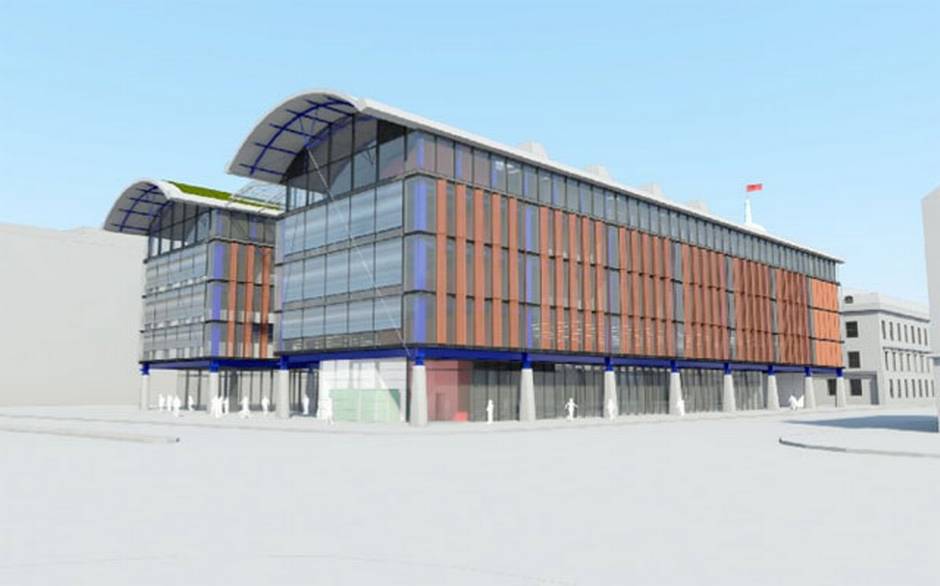 To refresh your memory, a competition was held in 2010 to replace the bunker-like, late-1960s one-storey structure with something larger, and the winning design by London-based Rogers Stirk Harbour + Partners (with Adamson Associates), while perhaps not an instant landmark like Markthal, was a striking building with adjustable louvers, a segmented ‘floating’ roof, and an overall muscular appearance.

As 2014 draws to a close and we’ve yet to see action, we can now demand something better. While our South Market can more than hold its own, let’s take a page from Rotterdam and incorporate housing and retail into a new, better North Market building.

The alternative? Every day, we’ll wake up to compromise.

Editor’s Note: The author received a grant to cover airfare and accommodations from Dutch government agencies. They did not review or approve this article.