On a crisp winter day, few scents appeal more than wood smoke, which signals, on a primal level, comfort and even safety. It is hard to imagine the aroma rankling anyone in the middle of February. And yet, smoke from wood-burning fireplaces and stoves is a major source of wintertime smog. It is a health threat and some municipalities are taking action.

Across North America, policy makers are tackling winter smog with restrictions on residential wood-burning fireplaces and stoves – ranging from bans in new homes, as Golden, B.C., and the city of New York have done, to less stringent requirements that all wood-burning fireplaces and stoves meet Canadian Safety Association or U.S. Environmental Protection Agency (EPA) emissions standards. From Prince George, B.C., to San Jose, Calif., to towns and cities in Atlantic Canada and on the eastern seaboard, a patchwork of regulations governing our much-loved (or at least romanticized) fireplaces and wood stoves is emerging.

Soon, Montreal will have some of the country's toughest regulations, and no wonder: winter smog alerts there actually outnumber summertime bulletins. Wood burning contributes to 39 per cent of the area's emissions of fine particulates – just behind transportation, which, at 45 per cent, creates the lion's share. On the island alone, some 65,000 homes use wood-burning stoves and fireplaces, and officials know that use jumps during winter storms. While the ice storm of 1998 may have led to a spike in the use of wood-burning appliances, "we knew for two or three decades it was a bad situation for the quality of the air," says Réal Ménard, mayor of the borough of Mercier-Hochelaga-Maisonneuve and the executive committee member responsible for the environment for the City of Montreal. The release of fine particulate matter is especially hard on people with asthma, bronchitis and emphysema, he says.

So while Montreal does not want a prohibition, "we do have a new emission standard," Ménard says.

Residents are required to register their wood-burning fireplaces and stoves, and, as of Oct. 1, 2018, will have to replace what they have now with equipment that meets the tough new EPA standard of only 2.5 grams of particulate released into the atmosphere each hour. (The current standard is 4.5 gm/h; uncertified fireplaces and stoves have higher emission rates still.)

It is a similar case in Metro Vancouver, which has some 2.4 million people in both rural and urban settings and has a unique geography that creates temperature inversion – a layer of warm-over-cold air that traps pollutants – in certain weather conditions. There, wood burning is responsible for 25 per cent of the total emissions of fine particulate matter. There, too, hospitalizations for respiratory problems have been linked to elevated short-term concentrations of particulates in winter, says Roger Quan, director of air quality and environment for Metro Vancouver.

The municipality has launched a new air-quality bulletin system to warn residents about stagnant conditions and ask them to burn wood only if absolutely necessary. Metro Vancouver offers a voluntary wood-stove exchange program with financial incentives to homeowners, and is considering following in Montreal's footsteps with a five-year plan that would include stricter regulations. Quan, who readily admits the issue is "divisive," is advocating for a gradual approach that "doesn't create hardships on people who would be using wood as their primary source of fuel." A third of the approximately one-million homes in the region have a wood-burning fireplace or stove, although fewer actually use them.

Still, the health concerns are significant. In its code of practice for residential wood-burning appliances, the Canadian Council of Ministers of Environment (CCME) states that studies of exposure to wood smoke have documented increased congestion and wheezing in young children, and cough, sore throat, chest tightness and phlegm in adults. While those amount to discomfort, the CCME also points out that short-term exposure to elevated levels of particulates from wood smoke has been associated with acute bronchitis, asthma attacks, aggravation of lung diseases and increased susceptibility to respiratory infections, while long-term exposure has been linked to reduced lung function, heart problems and premature death.

According to the Lung Association, some two million homes in Canada use wood as a source of heat. The Canadian Medical Association has highlighted the significant economic costs of air pollution in general. What's more, scientists note that the burning of wood creates black carbon (a short-lived pollutant) that contributes to climate change by absorbing solar radiation and warming the air, and also by darkening the snow and ice on which it lands, thereby reducing the reflection of solar radiation, accelerating melting even more. True, Canadian homeowners are hardly the major contributors of soot globally. It is also true the alternatives might be worse – locally sourced and managed woodlots may use less carbon and energy than the production and shipping of natural gas and other fuels.

The upshot? The way we burn can be as important as what we burn, or even more important.

In the United States, the manufacture and sale of wood-burning fireplaces and stoves is governed by the EPA. To manufacture and sell there, a company must meet its requirements. Although the Canadian Safety Association (CSA) sets safety and performance standards here and is federal in scope, compliance is voluntary. While a wood stove or wood-burning fireplace may meet CSA standards, it is not required to do so to be sold or installed. Municipalities deal with that.

British Columbia is in the consulting stage on an amendment that would make CSA or EPA certification mandatory on all stoves in the province. Elsewhere, where both certified and non-certified appliances are available, many people go with the option they can afford – and certified versions tend to cost more.

"Sometimes, we go out and pick out the one that's the cheapest. We're all guilty of that," says Gabriella Kalapos, executive director of Clean Air Partnership.

This raises the question: Should the size of our pocketbooks affect the quality of the air we breathe? Consider vehicle emissions. In Ontario, we can drive as sleek and powerful a vehicle as we can afford – but all vehicles are required to meet the same emissions standards.

Not so with wood-burning fireplaces and stoves.

"Because there isn't federal regulation in place, municipalities have tried to do what they can to address this issue," Kalapos says.

Enforced nation-wide emission standards would protect all consumers from wood-smoke air pollution, and individual consumers from the risks of indoor air pollution – as wood-burning devices that do not meet certification standards result in more pollutants in the home (not to mention a less efficient fire that can actually suck oxygen and heat from other parts of the house), she says.

Still, even as people become more aware of the health risks, the desire for self-reliance will remain strong – especially as the consequences of climate change hit home.

"You can't blame people for wanting that independence. …We're having a lot more extreme weather situations. We want to protect ourselves from power outages," Kalapos says. "There's going to be ongoing demand in the marketplace for people to have a backup system should power not be there for them."

She suggests factoring standards into the building code. "It doesn't mean we can't have [our fireplaces and wood stoves]. We do love them, but why wouldn't we have the best available products and install them?"

To prevent exposure to pollutants that can increase respiratory symptoms and exacerbate asthma and chronic obstructive pulmonary disease, the Canadian Lung Association recommends that no wood be burned in a residential setting.

Some of the hazardous chemicals in wood smoke identified by Environment Canada and Health Canada include:

Fine particulate matter. Declared a toxic substance under the Environmental Protection Act, these can be inhaled deep into the lungs and contribute to respiratory problems.

Carbon monoxide. It can limit the blood's ability to supply oxygen to the body's tissues, thereby causing fatigue, headaches, dizziness, nausea and confusion when inhaled at higher levels.

Oxides of nitrogen. Nitrogen dioxide, in particular, can cause shortness of breath and irritate upper airways.

Hydrocarbons. These can damage the lungs.

If you burn wood, make sure it is dry and seasoned (as wet or green wood produces more smoke) and use a certified high-efficiency stove, fireplace or insert, which can cut emissions by up to 90 per cent. (Plus, it takes far less wood to create the same amount of heat.)

Does staring at fire really make us more relaxed?

Does the sound and sight of fire trigger the relaxation response and alleviate stress? University of Alabama professor Christopher Lynn was eager to find out, because stress-related disorders are among the leading causes of disability in the modern era, with significant economic impact. So he designed experiments, published in the Journal of Evolutionary Psychology, to test his hypothesis that it would, and discovered that the sight and sound of fire (as opposed to just the sight) does in fact reduce blood pressure, especially with longer periods of exposure. And that was just the sight and sound of fire on a computer screen – without the actual heat, and the changes in the air, both good and bad. Now we understand why a luminous but silent gas fireplace does not always cut it.

Clean burners: Wood-burning fireplaces that are as stylish as they are efficient
June 5, 2017
I’m thinking about getting an electric fireplace – what are my options
May 11, 2018 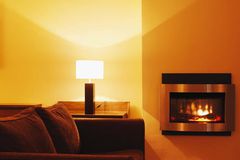