The acknowledged doyenne of primatology, Jane Goodall has spent more than four decades campaigning for the preservation of African wildlife. Under the umbrella of the Jane Goodall Institute (JGI), set up in 1977 with branches in 23 countries, she oversees an expanding program of community-centred conservation initiatives that also embrace education, health care, water resources and micro-credit.

No less critical, she maintains, is education of the next generation, a need JGI is addressing through Roots & Shoots, a program now active in 133 nations. Nothing less than such a holistic approach, she says, will suffice to save the world's endangered natural treasures. Dr. Goodall will speak on April 22 in Calgary and on April 24 in Toronto.

You set up your first community-based project in Tanzania in the early 1990s. What lessons learned there have been applied to later projects in Uganda, the Democratic Republic of Congo and elsewhere?

In Tanzania, our project manager picked a team of local Tanzanians who weren't PhDs, but were experienced in forestry, agriculture and women's issues. They knew the people and the languages. It wasn't a bunch of white people marching arrogantly into villages and saying, "Ah, you've made a mess here. We'll teach you what to do." It was local people prepared to listen and ask [the community], "What will help you the most?" That was the starting point – and then getting the support of village leadership.

What stands in the way of franchising this formula?

We've tried to do it. We gave several presentations to the [Bill & Melinda] Gates Foundation. Nothing happened. I tried with Unilever, and again, so far, nothing has happened. There are two issues here. One, the tremendous importance of small-scale family farming, as opposed to industrial agriculture, which involves clear-cutting, moving small farmers off the land and often making them servants on land they once owned. Second, we don't have the money to do this ourselves, so we need a partner, but the right partner. But we are making progress. JGI France has taken this model to Gabon. And JGI Spain has taken it to Senegal.

Some projections suggest that, given rates of poaching and habitat destruction, by 2050, African wildlife may no longer exist outside of zoos and a few national game reserves.

If we give up, that probably will be true. One of my great reasons for hope is the resilience of nature. Step No. 1 is preserving habitat and, concomitantly, mounting a huge education campaign in Asia. The problem is money, because the value of a dead elephant is huge. And the park rangers aren't paid properly – some of them aren't even salaried – so the temptation has to be enormous. And then government corruption …

If you had a magic wand, what measures would you take?

First, I'd want to create a consortium of all of us that care, not just the World Wildlife Funds and the JGIs, but the small groups working passionately on the ground, but without enough money to build really good education campaigns. We need education to control the demand. Until then, it will be almost impossible to control the poaching.

If you were starting out today, what would you focus on?

What I tell people is, what you devote your life to must be something you are really passionate about. It's the experience you get following your passion that enables you to be an effective conservationist. Your passion opens doors to the bigger world and the bigger picture.

Respected ecological voices argue that the larger issue, and larger risk to all species, including humans, is acidification of the oceans, to which deforestation contributes.

It's not just deforestation. It's all the greenhouse gases, the industrial, agricultural and household emissions. It's our whole unsustainable lifestyle on the one hand and crippling poverty on the other, accompanied by the growing human population, which encroaches on habitats. That's why corridors, like the kind we've created in Tanzania, Uganda and the Democratic Republic of Congo, are absolutely essential, even in urban areas.

You have a new book due out this fall on botany, which seems off the beaten track for you.

It isn't. The animals would not be here but for the plants, and nor would we. You either live by eating plants, or by eating animals that eat plants. It was as though the plants put roots in my brain and said, "Jane, you've been helping animals all these years, now it's our turn." The book took me on a fascinating journey, learning how plants communicate with each other. It's plants that we rely on to restore ecosystems. Life can lie dormant in seeds for 2,000 years. Plants don't have a brain, but if intelligence is the ability to adapt to different environments, plants are smart, smart – finding ways to spread their seeds and eat the sun.

How did you respond to the charges that portions of the new manuscript were plagiarized?

I tried to make it very clear that I am not a botanist. There were 12 pages of thanking different people for their help, and there were a few where a website was not properly thanked. It was so unintentional. It had nothing to do with my author, Gail Hudson. It was inadvertent and when it comes out in the fall, it will be 200-per-cent perfect.

You are almost 80 years old. You are the face and the brand. How long can you keep going?

That's impossible to answer. I can't retire. The time will come when I can't continue, but I don't know when that time will be. With every passing year, that time is inevitably closer, which means I have to do everything I possibly can while I can. I feel the speeding up of the clock. So far, my health is good. But my focus is the next generation, because if they won't be better stewards than we were, there's no point, is there?

Chimp champion looks to humankind
May 1, 2018 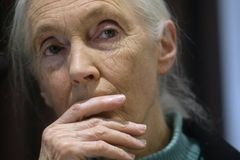 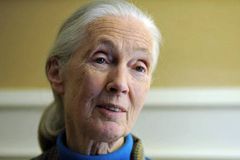