With the rise of cesarean sections in Canada, a baby's birth date now often comes down to a matter of scheduling. When is the doctor available? Is there a slot at your hospital of choice?

But new concerns are surfacing about the risks of scheduling a delivery earlier than the standard 39-week gestation. Although a fetus is considered full term any time after 37 weeks, new research published today in the New England Journal of Medicine has found a link between early deliveries and an increased risk of medical complications, including respiratory distress.

In a study assessing the health of babies born by elective cesarean section, those delivered before 39 weeks were substantially more likely to have complications than those delivered at 39 weeks. The complications included breathing problems and hypoglycemia that required medical ventilation, admission to an intensive care unit or a hospital stay of five or more days.

Alan Tita, a specialist in high-risk obstetrics at the University of Alabama at Birmingham, led the research, which examined 13,258 repeat C-section deliveries performed before the onset of labour and without any medical reasons suggesting an early delivery was crucial. The deliveries occurred at 19 academic medical centres across the United States.

A large proportion of those deliveries, about 36 per cent, occurred early, before 39 weeks gestation.

Of the babies delivered at 37 weeks, 15.3 per cent experienced medical complications. The figure dropped to 11 per cent at 38 weeks and 8 per cent at 39 weeks.

The lowest level of risk, 7.1 per cent, occurred at 40 weeks, before it started climbing again to a high of 19.5 per cent at 42 weeks - although very few women gave birth this late.

Put another way, Dr. Tita says, 48 per cent of the problems faced by babies delivered at 37 weeks "could have been prevented by waiting until 39 weeks."

While Dr. Tita says his study didn't ask mothers why they had chosen to deliver early, Michael Greene, the author of a related editorial in the same issue of the journal, speculates that since the largest demographic opting for early C-sections in the United States is white, married and privately insured, these women may be more likely to place a premium on having their own doctors perform the surgery. He also speculates that doctors tend to oblige.

But Dr. Greene says it is now important to convince "patients (and their doctors) that having 'their doctor' perform the delivery is less important than avoiding the complications associated with early-term birth."

With C-section rates on the rise in the United States and Canada, Dr. Tita says he hopes his findings give pause to doctors and their patients when it comes to scheduling a C-section. Because children delivered in this manner are already at a heightened risk of problems, especially respiratory ones, doctors should aim to schedule C-sections in the window between 39 and 40 weeks.

"This is going to be a useful tool physicians can use to counsel patients," he says. "Patients can be very assertive in directing their care."

One area Dr. Tita says he'd like to explore further is whether late-term amniocentesis, currently used to determine respiratory health in a fetus, could be used more widely to sort out which deliveries carry the most risks and which ones could, indeed, be performed before 39 weeks.

One expert not involved in the study, Scott Farrell, an obstetrician/gynecologist at the IWK Health Centre in Halifax and the president of the Society of Obstetricians and Gynaecologists of Canada, says he is not alarmed by Dr. Tita's findings. He says he is concerned that women who delay their delivery past 39 weeks face a slightly increased risk of stillbirth (1/1000). (No babies born at 37 or 38 weeks died in the study.)

And while he says the medical challenges faced by babies born at 37 weeks are not insignificant, they rarely lead to severe, long-term results. "They're transient. The effects are short-lived." 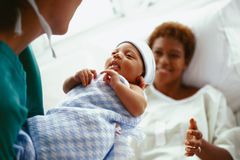 Follow Tralee Pearce on Twitter @traleepearce
Report an error
Due to technical reasons, we have temporarily removed commenting from our articles. We hope to have this fixed soon. Thank you for your patience. If you are looking to give feedback on our new site, please send it along to feedback@globeandmail.com. If you want to write a letter to the editor, please forward to letters@globeandmail.com.
Comments