My 15-year-old daughter, Talia, shivered uncontrollably as she climbed the first pitch of the Aftonroe route on Guide's Rock near Banff townsite. The wind buffeted us, funnelling over the large prow of rock through which the climb ran. We were exposed, a wart on a big rock nose. She climbed slowly, her hands clumsy on the rock. I realized she was uncertain, even afraid. In the mountains, cold and fear are two sides of the same coin.

She reached the anchor, where our guide, Erica, tied her in so she couldn't fall off the narrow ledge. I arrived to two pinched faces.

"It's too cold. Talia and I think we should just go down."

Disappointed, I suggested we try one more pitch and then decide.

"This feels like an alpine climb," Erica said, shivering, and told a story of semi-frozen climbs she had finished through sheer willpower – and because female guide aspirants need to be tough.

Talia tried to grin. Her face was white.

But while Erica climbed the next pitch, the wind beat us. My hands got stiff and I, too, started to shiver. As Talia ascended I thought about her, already chilled, bare hands on frigid rock because she was too scared to climb in gloves. Climbing because I had asked.

Was this what I wanted to do to my daughter?

Nice girls didn't do sports when I grew up. During a university year in London, I joined the Outing Club and did my first climb. The tactile rock, weirdly intimate, seduced me. In graduate school I climbed with a friend who did finger pull-ups each evening. After the introduction to mountaineering course at Yamnuska Mountain School, I was hooked.

My husband, Dave, and I have traversed Canada's western mountains on boots, skis, crampons and climbing shoes. Leading mountaineer Dwayne Congdon taught our daughters to climb by placing Smarties on the holds and climbing unroped up the face next to them. During summers, Talia built fairy houses with shiny white stones and mica at 7,400 feet in the Selkirk Mountains.

Last year, finally big enough to swing an ice axe, she completed her own mountaineering course. They had a close call with lightning that struck so near they were temporarily blinded. But I set that aside – I knew the drenched slogs, unending vistas and moments of glory that awaited. To some, a daughter's coming of age means Christmas cookies or sewing circles. To me, it means big mountains.

I dreamed about mother-daughter hang time in high places.

Our first guide was Brit Erica Roles, an Association of Canadian Mountain Guides (ACMG) guide. In 25 years of climbing, I have only ever had three female guides. Secretly, I worry that smaller stature means strength insufficient to catch my fall. But strong and whippet-thin, Erica disarmed me with her intensity and sense of humour.

Talia climbed well enough on our first day – conquering short routes on Mount Yamnuska overlooking the plains west of Calgary – that Erica chose Aftonroe, a full-day beginning climb, for our second objective. The start is easily accessed by a 20-minute steep trail, and the climb looks out over Banff National Park's Bow River valley, with spectacular views all the way up. The area is teeming with wildlife, including deer, beaver, fish, bears and wolves. As we climbed, I placed our safety in Erica's callused hands and relaxed into the intangibles of female strength and female ways.

When I reached the second anchor with numb fingers, I had to agree: We were going down.

In the forest, out of the wind, we warmed quickly. I toyed with going back up, but there was no point.

Erica insisted we head to nearby Sunshine slabs, which she swore were warm. She was right, and we spent the afternoon climbing short routes in a debris-strewn valley washed out by recent floods. Climbing is a mental as well as a physical exercise. You must reconnoiter the rock for hand and foot placements and think a few moves ahead. My favourite climb was a corner route that we climbed with one leg on each of the walls of a 90-degree corner. I had assumed Talia would tear past me. But she had trouble navigating: She lacked my muscle memory of balancing on tiny nubs, had never seen a corner route.

I began to see the climbs through her eyes, remembered my early days, how I'd learned to weight my body and balance on two points. How much my fingers hurt as they warmed after being frostnipped. What it felt like to fall off. Her calm and stoicism belied her inexperience. In my pride of her I became less critical of my own performance. Here I was climbing a mountain – in my 50s.

Erica was unavailable the next day, so ACMG mountain guide Matt Peter took us. He wore his 24 years guiding with humour and a relaxed aura that belied his gimlet eye. Aftonroe as yet unclimbed, we beelined for Banff. The steep track felt easier but – surprise – this route had trail-marker cairns.

As we made final preparations, another team arrived, a skinny, bearded man leading a young woman. Matt ensured we would climb first in order to minimize the risk of being hit by rockfall from above. A few minutes later, a third party of two women appeared. Things were getting crowded.

At the top of the first pitch, Matt and I were discussing the party behind us and didn't realize Talia was struggling with a big move over a block. The second party's leader came up alongside her.

"You've got this," he said, pointing. "Maybe you could put your foot there."

The second anchor was on a wide ledge. As we readied the rope, he appeared again, and in a twinkling climbed around us up a steep section and downclimbed into the corner. He had skipped the first anchor and come directly up to the second. Crazy visions of a high-altitude race and rockfall hitting Talia roiled my stomach.

"Don't worry," he replied, "My second can't climb. The next time you see us will be at your rappel."

Matt took off up the third pitch while I belayed; Talia would climb last.

Just as she tied in at the next anchor, the man arrived. We all just looked at one another.

I was miffed. A relaxed day of climbing, and this guy was tailgating us, showing up as soon as we finished each pitch. What was he doing, trying to ruin our day?

But Aftonroe's climbing was warm and wonderful. Smooth white rock ascended in rolling swells. Vertical cracks held our hands and feet while horizontal and ledges made the route easy-schmeezy. It was a highway.

By the fourth anchor, Talia and the man were friends. He climbed near her, gently offering advice on specific holds.

After three or four hours of climbing, we reached a withered, white tree on a heathered step – the top! I had packed a feast for lunch: filet mignon, chicken, toasted baguette, sliced Fuji apple, fresh cherries, dried mango, six-year-old cheddar and Le Chocolatier bars made in Canmore. Our new friend caught up a few minutes later.

We were almost finished when Matt looked pointedly at the large black cloud forming across the valley, and we hurriedly packed up. We did not want to be on a mountain with metal all over our bodies in a lightning storm. Matt set up our rappel under the looming cloud. Talia paused before stepping out over the edge.

"You're doing really well," the man told her.

Over she went. Soon she sped up and descended faster than I did. Adolescent exuberance prevailed as her hands fed the ropes in perfect form. The black cloud was billowing toward us and I hoped we could avoid a soaking. Or worse.

The darkness closed in, but we got off rappel dry. Talia felt compelled to take off her rock shoes and walk barefoot to our gear. Teenage freedom.

The walk down was a party. Aftonroe was ours.

Time stands still when you're climbing. The sun and the stone and the trees and the open sky override daily cares. Memories laced with pine sap and crushed heather take root. The sun shines a little more brightly. Talia and I had shared the Aftonroe days, would always share them.

If you want to go into the backcountry, Yamnuska Mountain School is the real deal: ACMG Mountain Guides will keep you safe and show you places you will never forget. yamnuska.com

You can rent bikes, skis, etc. at Gear Up in Canmore or many places in Banff. gearupsport.com

Lake O'Hara Lodge is a special place set on pristine Lake O'Hara in Yoho National Park near Field, B.C. Guests take a Park bus 11 km up the fire road. The deluxe accommodations include lakeside cabins and 11 rooms in the main lodge. All-inclusive rates start at $650 for two. lakeohara.com

Baker Creek Chalets are on the 1A road in Banff National Park between Banff and Lake Louise. There are 25 log cabins and eight lodge rooms. Rates start at $141 a night for two. Bow Valley Pkwy., Lake Louise; bakercreek.com

Crazyweed Kitchen in Canmore, 20 minutes east of Banff, is an artisanal restaurant serving some of the best food in the Bow Valley. The food is creative and well prepared; the bar has an excellent wine list and signature drinks. Go early or expect to wait. 1600 Railway Ave., Canmore; crazyweed.ca

Communitea is deservedly one of the most popular spots in Canmore. It serves fresh, clean food with a focus on vegetarian dishes. The café has the best coffee around and sweets including Canmore's world-class Le Chocolatier chocolate bars. #117 1001 6th Ave., Canmore; thecommunitea.com

Scale the Rockies, no mountaineering experience required. Seriously
September 22, 2014
Spa and high tea for mom? Save your money
May 8, 2015 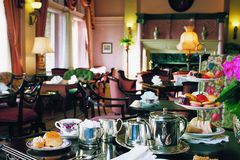 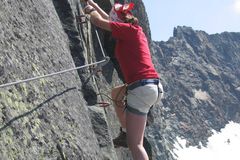 Whistler Mountain like you’ve never seen it before
April 21, 2014 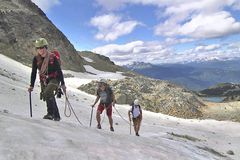