"I stay home because although writing and radio did make me extremely happy … your happiness was more important to me than my own," wrote Lovric, detailing her sacrifices after saying that earning extra income and making your kids proud of you are selfish reasons for working.

Just in time to quell the angry backlash of working mothers came the April issue of the Journal of Marriage and Family. In it, researchers from the University of Toronto and Bowling Green State University presented new research showing that there's no relationship between the amount of time parents spend with children ages 3 to 11 and how they turn out. Quality of time spent together, they said, is more important than quantity.

Can you afford to stay home with your kids? Can you afford not to? No matter what you choose, it seems, somebody will accuse you of doing it wrong.

Except that with today's digital technology, staying at home doesn't have to mean what it used to. It doesn't have to include giving up (or even putting on hold) your other ambitions in favour of circle-time attendance and slow-cooked meals. More parents than ever are carving out a new path, figuring out how to combine paid, satisfying work with real, quality time with their children.

"There is a generational and cultural trend for families wanting to spend more time at home," says Anil Verma, professor of industrial relations and human resources management at the Rotman School of Management. According to Statistics Canada, the number of workers who consider themselves self-employed or part-time continues to rise. Even traditional employers are likely to accommodate working from home for the employees who are considered key talent, according to Verma.

So what does a stay-at-home parent look like today? The parents at school pickup often have demanding professional lives – they just don't have to change out of their yoga pants to attend meetings. Today's June Cleaver could very well be that dad with the threadbare cords, bushy beard and his own graphic design business. Of course, he's too busy packing school lunches to worry about the Mommy Wars.

Ben and Jitka switched roles last August when she went back to work full-time as a communication consultant after having been at home, working the occasional contract, since having children. As a Web developer, Ben is more readily able to find freelance work, so he left the downtown tech company where he was a partner to stay home with the kids.

For Ben, a typical work day runs from 10 a.m. to 2 p.m. Then it's time for school pickup, chauffeuring the kids around to activities, cooking dinner and taking care of basic housework. Ben's still working on expanding his dinner repertoire, mostly through trial and error. After the rest of the family has gone to bed, Ben often stays up (sometimes as late as 2 a.m.) to catch up.

Are you a stay-at-home dad? "If I'm at home when the kids are home, then I'm a stay-at-home parent," Ben says. He's the one hosting play-dates, assisting with the baseball team and serving as class rep for parent council.

Best part: "I really enjoy the walk to and from school when the kids just talk about their days," Ben says.

Hardest part: Leaving his downtown social life behind. Spur-of-the-moment coffees with old friends and colleagues can now take more than a week of planning. Ben still does make that happen once in a while, bringing his laptop downtown and working from coffee shops. He also belongs to a mountain-biking group that gets together once or twice a month.

Down the road: Ben sees both him and Jitka working full-time jobs outside the house at some point, but he's in no rush.

Six years ago, when she was pregnant with her first child and newly unemployed, Laura jumped at the chance to start her own business. "I couldn't picture how I'd be going back to work with a baby," she says. Laura now runs her business, Cubit's Seed Company, from home, growing rare, heirloom, organic seeds for edibles and selling them online. Ryan works as a film and video technician at OCAD University and as a freelance cinematographer.

Laura tries to focus on bigger projects during the three days a week her two-year-old attends nursery school. The rest of the time, she manages customer care inquiries on the fly from her laptop or phone. "If I have a customer who needs attention right now, it only take three minutes to help them online," Laura says. "I can find three-minute increments throughout my day."

The summer is generally a slow time for Ryan's work, so the entire family lives in a trailer on the farm where she grows the food that will produce her seeds. During production time, it's all hands on deck, with her husband and brothers pitching in. The kids, on the other hand, are having a blast. "They have no idea that we're even working," Laura says.

Are you a stay-at-home mom? "I don't identify as either a stay-at-home or full-time working mom," Laura says. "I actually felt very isolated by this when my kids were babies because I felt left out of an important conversation." She hasn't ever taken any maternity leave to focus solely on her babies, but she also gets to make her own hours and doesn't have to commute. Still, friends don't always realize what's involved. "People are surprised that I've got things to do," she says. "I have some flexibility but I can't ignore my business because you are going to the zoo."

Best part: "I turned my hobby into my job," she says. And she still gets to bring her kids to the park.

Hardest part: When your job is in your house, it's very hard to turn off. She's also that mom on her phone at the park because her phone allows her to be there in the first place.

Down the road: Laura plans to continue to grow her business gradually, as the kids get older and need less hands-on attention.

Ione is an agrologist (an agricultural scientist) who tried to return to her full-time job after her first maternity leave, but long hours plus commuting time meant she barely saw her baby. Luckily, Peter, who is also an agrologist, had a secure job, so Ione decided to start consulting from home, advising government agencies and individual farmers on everything from climate change to crop planning.

After Ione spent two years of working from home, the family moved to British Columbia's Sunshine Coast, a 40-minute ferry ride from Vancouver. A year after that, business was so good that Peter quit his full-time job to work alongside her. His role involves longer hours and more travel, which frequently leaves Ione on her own with the girls.

Their two-year-old is at daycare three days a week, and Ione has learned not to take on more work than she can handle in that time. "I choose projects that I'm passionate about so I'm excited to sit down at the computer," she says.

Are you a stay-at-home mom? "I think of a stay-at-home parent as someone who is putting their career on hold," Ione says. "I have not had to do that, but I have changed course and slowed it down a bit." Then again, she is home with her youngest daughter four days out of seven. "We need a new category," she says.

Ione also knows that having the choice to decide whether to work or how much is a luxury. "For us it's worked out really well to do a bit of everything. I feel mostly satisfied." During the busy spring and fall, she often works past 11 p.m., which is easier now that she no longer has a baby waking nightly at 3 a.m.

Best part: Living in such a beautiful place, doing what she loves and spending time with her children.

Hardest part: Living apart from their families in Ontario and Quebec and having a husband who is often on the road. Part-time daycare and occasional babysitters are essential. "I love my child-care providers. I respect them and there's no way I could do my job without them," Ione says.

Down the road: When both girls are in school full-time, Ione would really like to carve out some time to exercise more, pick up old hobbies and volunteer. 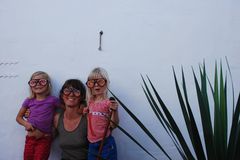 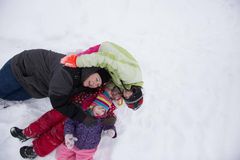