Parents are surprisingly good at detecting anxiety disorders in kindergarten children if asked the right questions, researchers at the University of British Columbia have found.

In a study of 200 kindergarten children in B.C.'s Lower Mainland, a two-question test given to parents was 85-per-cent effective in identifying children who met the criteria for anxiety disorders, says lead researcher Lynn Miller, an associate professor of education at UBC.

"If the parent says 'yes' to [either] then there's a high degree of predictability that the child will go on to develop an anxiety disorder," says Dr. Miller, who presented the research at the American Educational Research Association's annual meeting earlier this month in Vancouver.

The research confirms that parents of anxious kids – who often suffer from anxiety themselves – are attuned to their child's unusual behaviour, Dr. Miller says. "They do know that something is up, but they may not understand what it is."

Anxiety disorders take different forms in kindergarteners than in adults, Dr. Miller explains. Red flags include persistent stomach aches, reluctance to go to sleep or problems sleeping through the night in a separate room.

Anxious children may refuse to attend birthday parties and sleepovers or be unwilling to go on school field trips without a parent, she adds.

It's normal for kids to feel jitters from time to time. The difference is that children with anxiety disorders experience their fears as something catastrophic, Dr. Miller says. "It will impinge on their functioning in school, with friends and in their family life."

Left unchecked, anxiety disorders in kindergarten may lead to educational problems and increased risk of substance abuse, depression and other mental-health problems down the road, Dr. Miller says.

Studies have shown that up to 10 per cent of kindergarten-aged children suffer from an anxiety disorder – a rate that jumps to more than 15 per cent of high-school students, notes Dr. Miller.

Although anxiety disorders are the most common mental-health problem in children, they tend to get the least attention, she adds.

Teachers may not pick up on anxiety disorders because fearful behaviours don't normally interfere with students' learning, Dr. Miller says. Anxious children are often people pleasers and "very clever," she says, "but they're suffering and they don't have to."

Dr. Miller advises parents to read about anxiety management on websites such as AnxietyBC.com. "I would go online first and see what you can do at home and if you're not getting anywhere, then go to a mental-health professional."

Cognitive-behavioural therapy is effective for all ages, notes Katharina Manassis, a psychiatrist and director of the Anxiety Disorders Clinic at The Hospital for Sick Children in Toronto. She adds that young children are unlikely to be put on medication to treat anxiety unless their symptoms are severe and persist after professional therapy.

Dr. Manassis describes the two questions developed by the UBC team as a "good screener." But she cautions parents against jumping to conclusions based on the test. In some cases, shyness is simply a personality trait, Dr. Manassis points out. The two-question test may identify behaviours that warrant a closer look, "but not necessarily that the child has a horrible problem," she says.

The downside of labelling a young child as having anxiety is that some parents become overprotective, Dr. Manassis says. "The child's anxiety becomes a kind of excuse for bad behaviour or an excuse for withdrawing the child from activities or school requirements," she explains. "That's actually the opposite of what you want to do because you want the child to face those things."

Dr. Miller acknowledges the risk of stigmatizing a child but she emphasizes that teaching young children how to manage anxiety increases their chances of building a positive self identity. While parents of anxious children often say, "We're a family of worriers," the goal is to "turn that self-talk around," she says. With practice, the child will internalize the message that "I can be confident and brave no matter what," she says.

As early as kindergarten, children can learn skills to cope with anxiety, says Lynn Miller, an associate professor of education at the University of British Columbia. Here's how parents can help.

Explain to the child that his or her feelings of worry or dread are caused by a condition called anxiety.

Help the child notice the connection between anxiety and shallow, rapid breathing. Teach the child how to breath slowly and into the belly.

Help the child face fears in a gradual, systematic way. A child who is anxious about swimming lessons could start by dangling feet, then legs, into the pool. The child could play in the shallow end the next day and keep taking small steps from there. "You don't just throw the kid into the pool," Dr. Miller says. 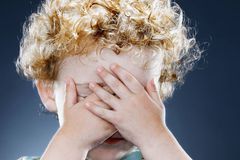