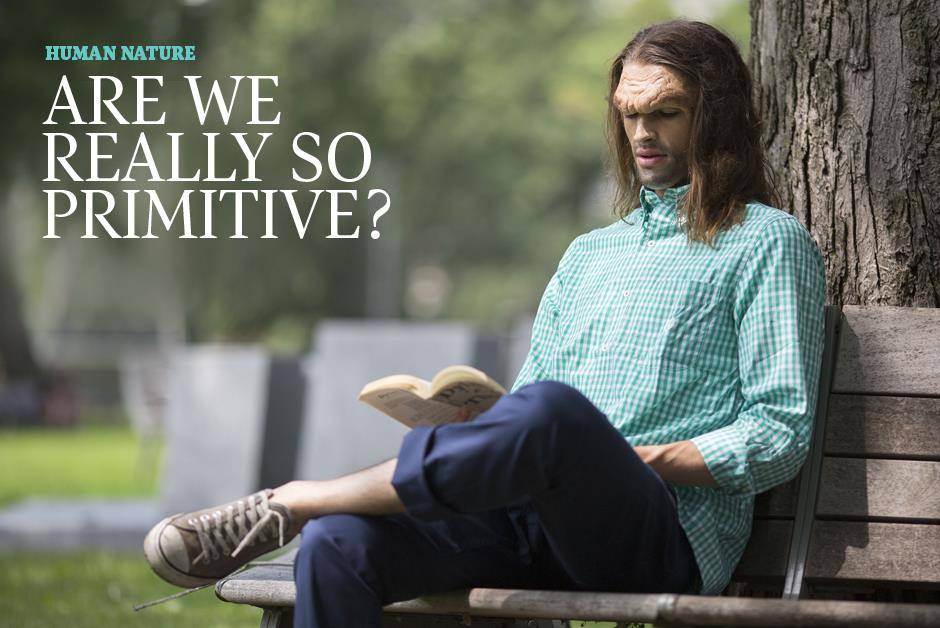 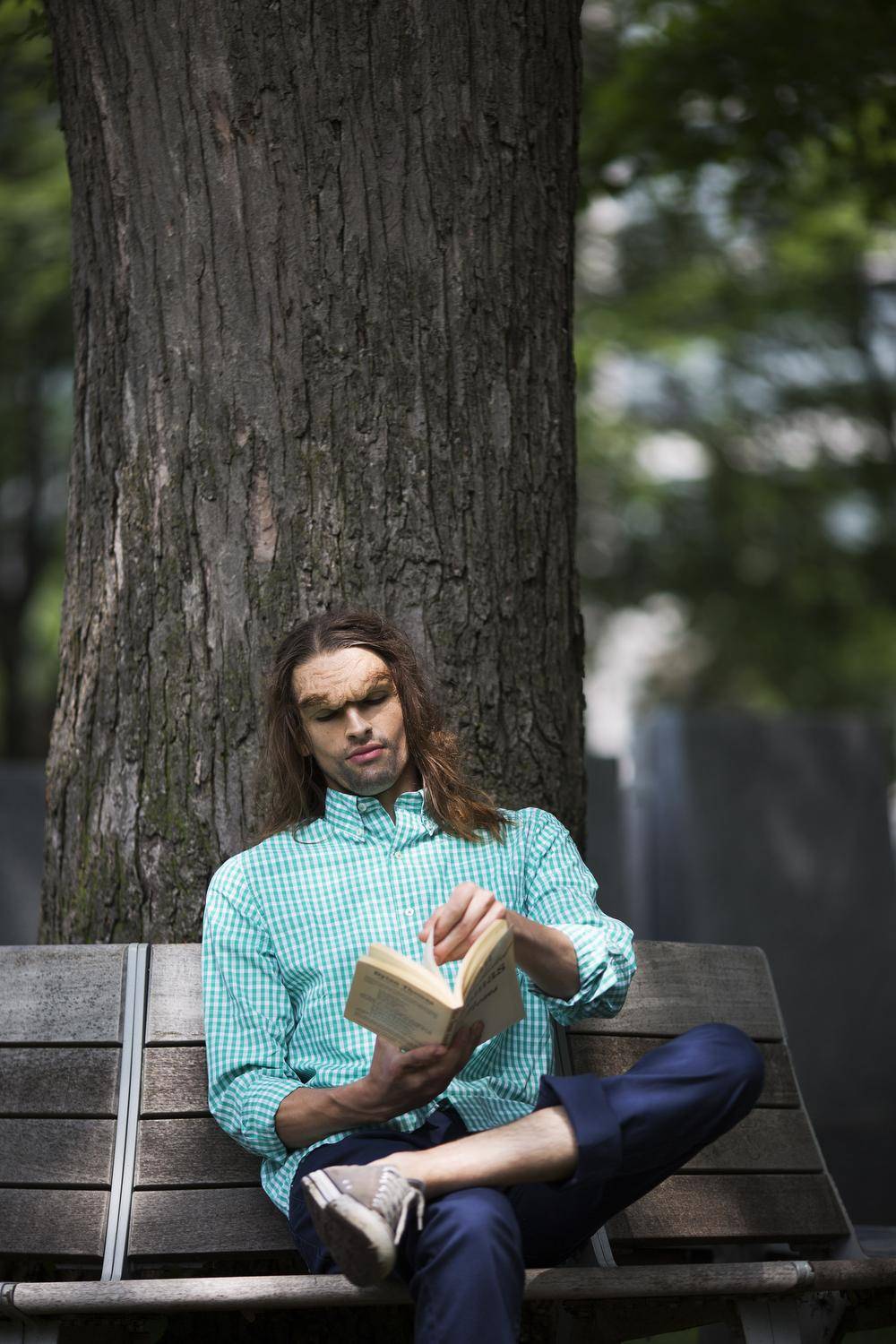 A modern caveman in Toronto: hair and makeup by Heather French and Sandra Restante; photos by Michelle Siu for The Globe and Mail

Prehistoric ancestors make for such convenient scapegoats. Those hunter-gatherers may have died between 1.8-million and 10,000 years ago, but according to a field of study called evolutionary psychology, they have a hand in all manner of modern human behaviour. We see it all the time, in scores of scientific articles, best-selling books and catchy headlines. Men are handy with a map, the theory goes, because, way back before civilization, they went hunting; women shop – especially for pink things – because they’re still gathering berries. Men chase one-night stands to spread their seed. Women are choosy about who they sleep with because they bear the babies. Basically, from jealousy to adultery to stalking one’s ex, there’s an inner homo erectus pulling the strings deep in our stone-aged brains.

The explanation, is admittedly, beguiling. How great to think that science might have dug up an evolutionary blank cheque for our more daft, and deviant, behaviour – especially with the opposite sex. (Don’t blame me! I’m just a caveman/cavewoman at the core.) This line of research – a mash-up of social experiments, biology and anthropology – perhaps unwittingly has helped validate stereotypes.

Lately, though, the caveman theory has been getting clubbed. A recent Polish study, for instance, took a swipe at the widely published idea that men have evolved to prefer a waist-to-hip ratio à la Marilyn Monroe, by showing that while this held true, on average, there was significant variety among individual men. An upcoming paper in the American Sociological Review also challenges the long-held stereotype of the “trophy wife” and “sugar-daddy husband,” finding that both good-looking and successful people tended to choose those same qualities in a life partner. And a spring debate between warring academic papers has cast doubt on numerous studies suggesting women choose partners differently based on their menstrual cycle. 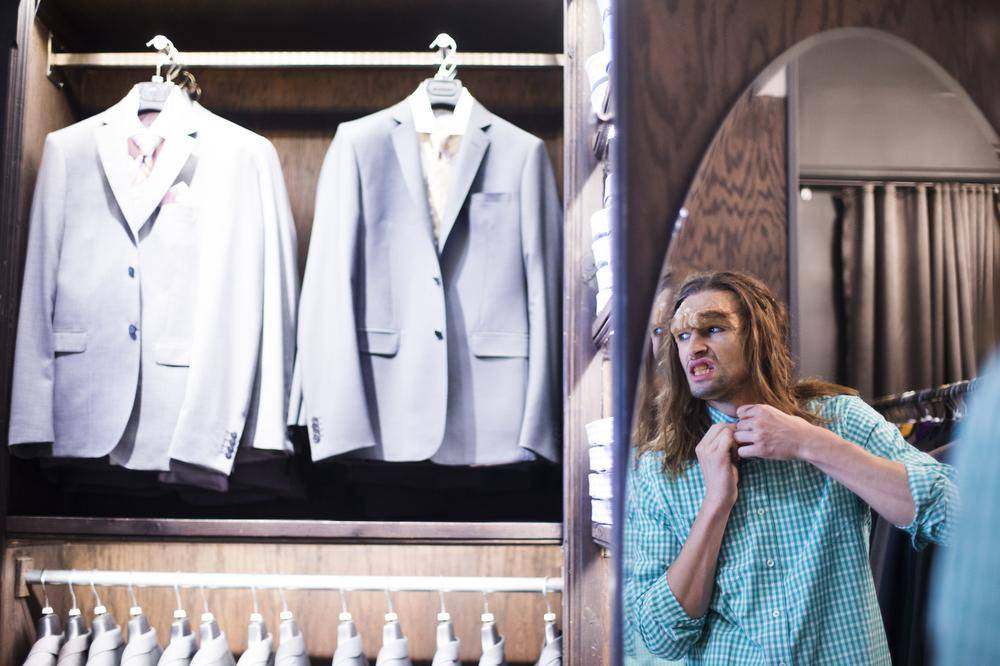 For many biologists and anthropologists, leaps made by evolutionary psychologists border on the fantastical.

Too often, when it comes to gender behaviour, what sounds like hard science falls much closer to slapdash speculation. Some of it’s frivolous (e.g., shoe-shopping equals berry-picking). Much of it’s sexist, with both genders cast as hapless dupes to their reproductive natures (e.g., women can’t help being manipulative gold-diggers, while men innately simmer with rage at the thought of their mate being “poached”). But the research has also produced insidious conclusions – that white women fear black men when they are ovulating, for example, or that men evolved to beat their partners.

These ideas drift beyond academic debate. Why bother with paternity leave, if the obligation of fatherhood is chiefly biological and men are meant to be hunters? Why push women to be engineers or mathematicians, if their brains genetically lag behind on spatial skills? For that matter, as Canada’s Justice Minister Peter MacKay seemed to suggest recently, why make women judges, if they are preoccupied with the biology of motherhood? There’s the sour whiff of this destructive gender narrative, packaged in science, in the pick-up-artist movement, an online community that details aggressive and often misogynistic “seduction” tricks for “closing like a master” on reluctant female targets.

The oft-sweeping conclusion that nature tramples nurture has a diverse group of critics, including biologists, anthropologists and feminist scholars. “They often speculate widely on pretty flimsy evidence,” argues Massimo Pigliucci, a philosopher at City University of New York, and the author of Nonsense on Stilts; How to Tell Science from Bunk. “There is a grain of truth, and then people just blow it out of proportion.”

Typically, evolutionary psychologists make the prehistoric time jump by first conducting modern-day lab experiments on relatively small samples of the most easily accessed human lab rats: the mainly white, middle-class students on campus. They then extrapolate from our understanding of prehistoric societies and biology, particularly the role played by the amygdala, a primitive section of the brain that controls fear, aggression and sexual desire.

For instance, a 2008 University of Rochester study reported that men found women more desirable when they were linked to the colour red – though, in the experiment, this preference was far from universal. There might be cultural reasons for this, the researchers conceded. But given that the shade was similar to the colour of a female monkey’s genitals when “nearing ovulation,” the article concluded that the finding also suggests “what many women have long suspected and claim – men act like animals in the sexual realm.” (That men are pigs of a primate variety is a not-uncommon scientific conclusion in this area of study.)

For many biologists and anthropologists, leaps made by evolutionary psychologists border on the fantastical. For one thing, there are no fossils for feelings. (For another: If prehistoric women were chaste and the men were promiscuous, who exactly were the men having sex with?) Despite key discoveries, we still know little about our earliest hominid ancestors, and many of those conclusions are based on studying the few remaining hunter-gatherer societies, whose social conventions and gender roles differ, depending on where they live. 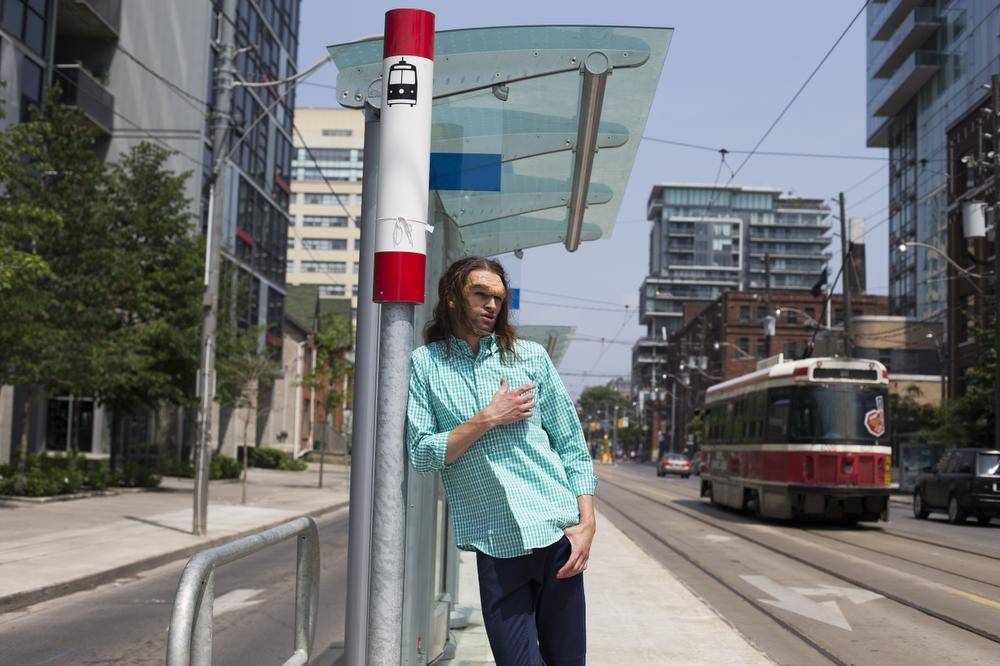 In one infamous experiment, repeated in various forms by researchers around the world over the past several decades, men and women are approached by attractive strangers with an offer of casual sex.

Human beings clearly adapt within culture, in spite of their genes, and neuroscience suggests that the brain evolved much faster than previously thought – Tibetans, for instance, adapted to high altitudes in roughly 3,000 years. In the survival-of-the-fittest Olympics, general intelligence and flexible thinking presumably matter more than liking the colour pink (which, notably, was a boy colour until about 100 years ago).

Whatever the amygdala brings on a first date, cultural norms and expectations are heavy baggage. In one infamous experiment, repeated in various forms by researchers around the world over the past several decades, men and women are approached by attractive strangers with an offer of casual sex. Each time, a sizable majority of men accepted, and virtually no women did. But does this mean women are saving themselves out of evolved instinct? Or is it because social mores – and safety considerations – make women hesitant to trundle off to an empty apartment with strange men?

In more egalitarian societies, a 2012 British meta-analysis found that mate preferences between men and women converge – in nations such as Finland, for instance, both genders place similar value on education and intelligence, and women are more likely to want partners who are good cooks. Even the notion that the male “hunting” brain is naturally better at navigation than its “gathering” female counterpart has been challenged by Canadian anthropologist Adrian Burke, whose research has found that once training, gender stereotypes and experience are accounted for, there is no difference in how well men and women find their way. 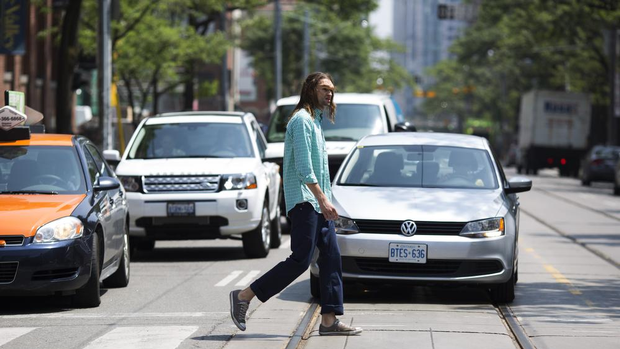 To be fair, David Buss, one of the most high-profile evolutionary psychologists, argues that many of the field’s findings have been misinterpreted. As he pointedly notes in his own published papers, just because humans may have evolved a certain way doesn’t make the behaviour acceptable. (Though perhaps, he suggests, knowing more about the most harmful innate tendencies will lead to being better able to overcome them.) But he also argues it is unscientifically sound to suggest that men and women evolved differing reproductive systems, but no psychology that corresponds to those differences. “It would be analogous to saying that humans had the anatomy for bipedalism, but not have the behaviour of walking on two feet.”

That’s a reasonable theory, if evolutionary psychologists would be more judicious in drawing conclusions. For instance, Marlene Zuk, a U.S. biologist who wrote the 2013 book Paleofantasy, explains that while it’s often assumed that macho alpha males are the rule in nature, the original idea emerged from Norwegian research into the pecking order observed among hens and roosters. “So the idea,” she says, “that some kind of biological imperative makes all males feel they have to strive for dominance to get sex is problematic, unless you think that men are striving to be more like chickens.”