Owls peer out from behind neon lime flaps on one. Another is made entirely out of newsprint. A third has handy iPod pockets.

Once a symbol of kitchen drudgery, the apron has not only come back from the dead, but has become a widespread fixation among young, nostalgia-enamoured women. They idolize it in blogs, through Twitter and on Facebook pages. A new annual magazine, apron•ology, serves as a paean.

Commercially, aprons are multiplying online at Etsy and at retailers like Anthropologie, which carries 28 retro styles, including Baker's Delight, a cupcake-patterned apron that the character Charlotte donned during a meltdown with her toddlers in this summer's Sex and the City 2.

In Pictures: These aren't your grandma's aprons

On TV, domestic goddess Betty Draper has worn a blue tulle hostess apron on Mad Men and steely Bree Van De Kamp sported two fine floral patterns on Desperate Housewives. As these retro-chic examples suggest, the modern apron isn't at all like the stiff, butcher-style number Grandma used to wear - and hardly fit for wiping your buttery hands on. Many are crafted from vintage linens, frilly chiffon and delicate crinoline.

"I have them, but I'm very hesitant to wear them," the 25-year-old editor editor of apron•ology, Beth Livesay, says from California. "If I'm going to be getting very dirty in the kitchen, I'd rather just wear gym clothes. But if I'm serving cocktails and having a party, then of course I want to throw one on," she adds.

An apron that isn't meant to be stained? That's just one of the contradictions surrounding the garments of late. So is the quaint nostalgia among young women for an article of clothing that once evoked domestic submission.

"I consider myself a feminist," Livesay insists. "I'm a 21st-century liberal in the political sense and I wear aprons. It's okay."

The embrace of such a potent symbol aside, what appalls many feminist critics about the resurgence of aprons are the tarty, tight varieties that are cropping up on some websites, conjuring visions of women as housewives in heels, waiting with hubby's scotch in hand in an immaculate home.

"I can see the appeal of these cute aprons, but it's more complicated than that," says author Shira Tarrant, whose book Fashion Talks: Undressing the Power of Style is slated to be published next year.

"These aprons are reinforcing ideas that domestic labour like cooking is women's work and there's nothing ironic or progressive about unpaid work, even if we want to wrap it up in a pretty decoration," says Tarrant, who also blogs for Ms. Magazine.

EllynAnne Geisel, an "apron archaeologist" who owns about 800 of the garments, allows that it does have "ties to strangulation."

"It was domestic wear that limited our options to develop into who we were meant to be," says Geisel, who made Bree's aprons on Housewives (her company is www.apronmemories.com) and is the author of The Apron Book: Making, Wearing and Sharing a Bit of Cloth and Comfort.

Like other apronistas, she argues that the unforgiving work schedules that have threatened domestic life to near extinction today have conversely made the apron a symbol of respite - at least for some women.

"I look at the home as a cocoon from the chaos that has become our daily lives," Geisel says, pointing to the enormous popularity of home and cooking networks as well as domestic divas like Nigella Lawson.

"Young women are saying, 'Show me how. I want to learn. I want to revive that gene inside of me.'"

Livesay suggests the recession also helped resuscitate the apron: "We're seeing people going back to the home and making things for themselves and for others. Maybe it's for extra income, gift-giving or going back to the things that we love to do, to remind us of happier times."

As for retailers getting in on the trend, "we're trying to create a fantasy for [the modern woman]and an escape," says Aaron Hoey, general merchandise manager at Anthropologie Home, where the top-selling apron is a ruffled corsage number called Tea-and-Crumpets.

"They're functional, so if you wanted to wipe grease on them you could, but it's more about being feminine and frilly and whimsical and fun," Hoey adds.

Indeed, modern apron-wearers are hardly slugging it over a washboard like their predecessors. "When you're getting appetizers out of the oven and serving drinks, it's nice to have something on that's not ugly," says Marla Fortier, a 30-year-old homemaker who launched Sugarbaby Aprons (www.sugarbabyaprons.com) from Fort St. John, B.C. last October.

Her aprons are essentially fitted dresses to be worn over other dresses. She models them in teetering heels on her website, where she aspires to put "the sexy back into the housewife."

"I think entertaining has become a lost art," says Fortier, a big fan of such retro TV classics as I Love Lucy and The Dick Van Dyke Show: "I love the glamour and the beauty of the women back then."

As a group, today's apron makers do seem deeply affected by those fictitious worlds, a point that concerns critics like Tarrant.

"This nostalgia for the fifties mom at home, for Leave it to Beaver and Father Knows Best - it never really happened exactly like that," she says. 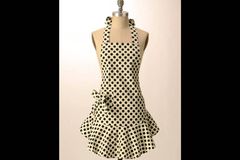