London is too often a means to an end for travellers en route to beaches, countryside or continental Europe. It makes for a stressful couple of days, ticking off the greatest hits without time to delve into the greater context. So here's a thought: Instead of descending back into the Tube once you've had your fill of the must-see, stick around for an hour. Often, you'll have to walk only a few blocks before an entirely different London presents itself. I'm not talking "trendy London" or "hidden London," but rather London as it was built for Londoners by Londoners, whether 500 years ago or just last month.

It is possible to be tired of London without being tired of life if you've spent a morning battling the crowds around Westminster. By the time you've found your way to Buckingham's East Front, the facade overlooked by the winged Victoria Memorial, one might even regret having prepaid the $30 (£19) entrance fee. Regardless of whether you decide to explore the State Rooms, your next move should be on to the distinctly unfrenzied St. James's.

If you've budgeted for a midday meal, follow the Mall (with St. James's Park at your right) until you see signs pointing toward Inn the Park, the café that hosts weekend summer barbecues on the roof garden. Or, leave the Mall at Marlborough Road and head north into the patrician enclave, where gracious Georgian townhouses are steadily yielding to less conservative clients.

David Gill Galleries (2-4 King Street) shows collectible design by bleeding-edge Brits such as Zaha Hadid and Fredrikson Stallard, and Brazilian grandstanders Humberto and Fernando Campana. In an adjacent laneway called Mason's Yard, the neighbourhood's first new-build since the 1970s hosts an outpost of White Cube, the gallery chain that represents Tracey Emin and Gilbert & George. The tailors of Jermyn Street are around the corner, along with any number of nobly named ivy-walled pubs.

The blue door of Notting Hill fame has long since been painted over, but Portobello Road still has its charms, even if you don't arrive on market day (and if you do, make it a Friday rather than Saturday, which brings a deluge of sightseers). Pottering in the warrens of vintage wares is a rite of passage, but there is more to this part of West London.

If you've clung to the southern reaches of the Portobello, continue further down until you arrive at Holland Park and its wooded trails, sculpted gardens and symphony of sound effects (from the opera pavilion, the resident peacock and more than a few Russian oligarchs). If you're oriented north, follow Portobello's stalls to the highway overpass, where the little indoor plaza Portobello Green sells fashion from independent labels. Continue on Portobello Road until you hit Golborne Road.

A far less glamorous alternative branch of the famous market, Golborne nonetheless has its virtues: a dozen Moroccan restaurants, for one (it's not called Little Morocco for nothing), but also boutiques by leather-bag designer Ally Capellino and accessories designers J&M Davidson. A few blocks to the north is the Trellick Tower, a concrete paean to 1970s brutalism, built by Erno Goldfinger to house immigrants from Portugal, the Caribbean and, of course, Morocco. Past the tower is Rellik, the legendary vintage boutique (name a supermodel and it's likely she's shopped there) that stocks swingin' designers such as Ossie Clark, Vivienne Westwood and André Courrèges.

After the Tower of London:

Even the most cynical Londoners will recommend the Yeoman Warder tour at the Tower of London – it's that fascinating. One of the city's greatest disappointments, nevertheless, are the traffic-clogged highways that surround the fortress. Avoid them. Duck under the flamboyant Tower Bridge and join the Thames Path eastward along the river. It will take you past the cafés surrounding St. Katharine's Docks, then onto Wapping, a maritime enclave of converted Victorian warehouses and cobbled streets.

At low tide you can follow steps down to deserted pebble beaches, or drink a pint on the terrace of the 500-year-old Prospect of Whitby, London's oldest riverside pub. Across Wapping Wall, by the historic Shadwell Basin Bridge, is the enchanting Wapping Project, a former hydraulic power station with its original machinery intact that has been converted into a restaurant, gallery and event space, with a charming art bookshop in a greenhouse on the lawn. There's a pristine little train station on the High Street, which will take you into town. Or, if you're hardy, you could hike up Wapping Lane to Cable Street, site of the 1936 battle against the British Union of Fascists.

If you must. Customarily tourists follow up a morning among the dreadful wax figures with a visit to the Sherlock Holmes Museum up Baker Street, or an alfresco lunch at Regents Park's secluded Garden Café. But if you enjoy a spot of antiquing, there is really no finer place in London than the obscurely located Alfie's Antique Market.

Travel east on Melcombe Street, past quaint Marylebone Station, and turn up Lisson Grove. Soon you'll come across the blue-chip "chippie" Sea Shell of Lisson Grove, worth a lunch of deviled whitebait, scampi and superlative cod and chips. Three blocks north is Church Street, where Alfie's presides over an expanding empire of middle-market antique shops.

They're set up to ship abroad – as are the dozen or so antiques vendors who have popped up along this folksy market street in the past two decades – and even better equipped to fill you in on their glamorous European sources.

After the British Museum:

Regardless of what nation you believe should own the Elgin Marbles, nobody can dispute the superiority of the British Museum – and the fact that its circular, sky-lit atrium is perhaps the country's most spectacular architectural feat. Go see the museum's brilliant Pompeii and Herculaneum exhibit, then explore the mythical Bloomsbury Square and emerge into Theobalds Road, which will lead you to oft-overlooked Lamb's Conduit Street.

The collection here of Georgian townhouses has a distinctly Old World feel, with some of the tidy shopfronts barely changed since the mid-century. The rest have been modernized by some of the city's most innovative independent retailers, such as the ultramodern concept shop Darkroom, the men's wear shop Folk, and Persephone Books, which reprints beautiful versions of forgotten 20th-century literature.

Toward the top end are two legendary pubs – the Lamb, named for the street's namesake William Lambe, and the enigmatically named Perseverance, both with original Victorian features and classic British menus. 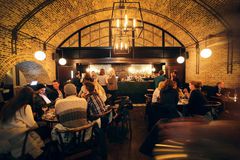 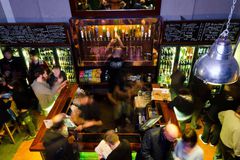