The Catalysts is a talent search for creative Canadians in food and drink, style and design, and arts and culture. Who are they? You be the judge. Tell us who should make the list by completing the nomination form here.

Chef David Lee sits on the judging panel for the Catalysts.

It is said that too many cooks in the kitchen spoil the broth.

But when that kitchen belongs to chef David Lee, the more the merrier.

Lee, the co-owner of the Nota Bene restaurant in Toronto with partners Yannick Bigourdan and Franco Prevedello, is as much a connoisseur of raw talent as he is of exquisitely prepared food, having personally nurtured several baker's dozens of apprentices who have gone on to achieve culinary success of their own.

"It's what you do with what you know that let's you be successful," says Lee, a firm believer in sharing wisdom in addition to recipes accumulated over a lifetime of culinary experience.

One of three panelists selected by The Globe and Mail to judge The Catalysts contest, the British-born chef of Chinese descent is known for deftly handling not only a white truffle, among other rarefied ingredients often employed in his cooking, but also the people in his employ.

"It really comes down to love," says Anthony Rose, a former Lee apprentice who has gone on to be chef and co-owner of Rose and Sons, which opened at the intersection of Dupont and Davenport streets in Toronto nearly three months ago.

"He absolutely loves what he does and he's very gentle and soft-spoken and very nurturing. He's like a father figure, warm to be around. He makes you want to learn. He has influenced me greatly. Even now, when I'm trying to come up with a recipe or when cooking, I always ask myself, 'What would David Lee do?'"

Nurturing other chefs and helping them run restaurants of their own, as he did in 2009 after he sold his fine-dining restaurant Splendido to two members of his kitchen staff, is as much a Lee specialty as his Yucatan hot and sour soup.

"If I can give some of my beliefs, some of my philosophy, to an apprentice who wants it, emphasis on want, then I am happy," says Lee, sipping a morning coffee at one of the tables inside Nota Bene, the Queen Street West establishment where he mans a team of 25 chefs.

Trained in Michelin-starred cooking in Europe before immigrating to Canada in 1991, at 24, to take up a position as chef de cuisine under chef Marc Thuet at Centro in Toronto, Lee says that food is not just sustenance but an attitude.

Born in the village of Stevenage in Hertfordshire, England, about 50 kilometres north of London, the third generation of chefs in the Lee family moved with his elders to the island nation of Mauritius, once home to the now-extinct Dodo bird, when he was 6.

There, a doting grandmother taught him that cooking was about showing respect to the ingredients used in a particular dish as well as to the people assembled to prepare and eat it.

"I remember my grandmother teaching me respect at 6 even though I didn't really understand it until I was 15, which is when I first knew I wanted to be a chef," says the 42-year-old married father of two whose wife, Jennifer O'Brien, is a former chef turned real estate agent.

"She'd say to me, 'Okay, now we're going to see the chickens,' and she'd take me by the hand and she'd show me how to kill the chickens. I wasn't grossed out. For me, we had had this chicken since it was an egg, and then it was a baby chicken, and we fed it and it roamed around. We had to have dinner. If it was Chinese New Year a chicken had to be killed. It was a very natural thing."

More than three decades later, Lee continues to honour the animals who give their lives so humans can eat.

"Every morning here at Nota Bene we get tuna from Hawaii, and I feel and speak to the tuna and say, 'Thank you, there will be a lot of diners who'll be appreciating you tonight.'"

The chef known at his restaurant simply as just that, Chef, a term of respect uttered by all members of Nota Bene's staff, from the greeter out front to the neatly-aproned servers hovering throughout a spare room hung with colourful abstract art, is also a devotee of wild game.

In Mauritius, he trapped fruit bats as food. In England, where at 17 he landed his first job working under the guidance of executive chef Peter Kromberg at prestigious Hotel InterContinental in London, he hunted game birds at Sandringham.

In Canada, he has prepared venison for his guests but can't bring himself to shoot the deer he admires wandering silently through the wilderness of his adopted land.

"I can't imagine killing an animal now, even though I understand and respect the need to do it," he says.

The apprentices he has trained have tended to adopt this animist approach to cooking.

Among them is Josh Wolfe, who served under Lee when both were at Centro.

"He taught me everything and I mean everything everything," Wolfe says from Vancouver, where he operates food truck Fresh Local Wild and soon will open his second bricks-and-mortar restaurant, each of which was inspired by what Lee taught him over a four-year period.

"He was my first real chef, the first to take me under his wing, and when he thought I was worthy of it, he taught me everything he knew."

That education involved Lee taking his apprentice back with him to England to revisit his culinary roots.

"I stayed with his mother," Wolfe continues, "and he took me to all the restaurants whose kitchens were influential to him. I think he was hoping I'd pick up and carry on what he wanted to teach me as a chef, which is a philosophy of cooking rooted in the love of the ingredient. His quest to honour the ingredient, and let it shine through and make it be what people talk about, has been and remains his biggest influence on me."

Lee is aware of the impact he has had on the young chefs he has raised through the ranks. He mentions one who once asked to go to Nepal for an extended leave of almost two months. "I said he could go on one condition," Lee says, leaning back. "And that was to bring me back something blessed by the monks."

That gift ended up being a large ball bracelet, which Lee wears on his right wrist, a constant reminder of the connections he has forged between those entrusted to his care and the universe at large. "Every apprentice wants to be a chef," he says. "But not every apprentice understands what it is I am preaching. Some might say I nag. But really I am giving knowledge, and an approach to life." 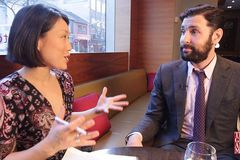