She still hasn't said whether she will seek the Democratic nomination in the next U.S. presidential election, but Hillary Clinton is already under the microscope over about how old she would be when she hypothetically took office.

The former secretary of state (2009-2013), U.S. senator (2001-2009) and First Lady (1993-2001) has nowhere else to go in American politics other than to be the first woman to run for president under the banner of one of the two major parties. She lost that chance to President Barack Obama when he won the Democratic nomination in 2008 and, even though she continues to play coy, as any politician would at this point, it's highly conceivable that she will take one more stab at it in November 2016, when she will be 69. (Her birthday is in October.)

Salon, the online magazine, said categorically this week that, "No, Hillary Clinton is not too old to be president." Salon editor-at-large Joan Walsh pointed out that Clinton logged more than "a million miles to 112 countries" as secretary of state. Clearly Clinton has the energy, talent and resume for the job of president. These days in general, there is no longer any reason to think a person in their late sixties can't handle the demands of an election campaign.

As well, were she to take office at 69, she would do so at the same age as one of the most popular presidents in modern American history: Ronald Reagan.

There is also no valid reason to think Clinton's gender would be a factor, unless you want to take into account the fact that women live longer than men. And Rush Limbaugh's infamous "Will this country want to actually watch a woman get older before their eyes on a daily basis?" – a comment he made about Clinton in 2007 – has been roundly and deservedly refuted as the sexist remark it was since then.

But Salon's Walsh does concede there may be an electability issue with a presidential candidate who would be 68 when the next election campaign starts. She quotes a writer who pointed out that the trend with the last three presidents skewed younger: 46 (Bill Clinton), 54 (George W. Bush) and 47 (Obama). Recent older candidates such as Bob Dole (73 when he ran 1996) and John McCain (72) were rejected by voters, Walsh writes (although in McCain's case it probably wasn't his age but his ridiculously under-qualified running mate, Sarah Palin, that did him in).

Historically, a quick look at a list of U.S. presidents shows that, out of 44 presidents, Americans have elected 10 who were over the age of 60 and nine under the age of 49. The majority were in their mid-fifties, which not surprisingly also happens to be the median age of an S&P 500 CEO.

They were also all men (as were just about all of the CEOs). Clinton will have many factors to consider when she decides whether to run or not: her health, her finances, the support she can muster, what the polls are saying. In the 21st century, however, she should not have to consider whether her gender or age are factors. If and when she declares, all that will matter is whether voters think she can do the job; it's not up to her to read the minds of a voting population that, as the new secretary of state, John Kerry, said this week, has "the right to be stupid."

Hillary Clinton’s newest title? ‘Most admired woman’ in the world
May 9, 2018 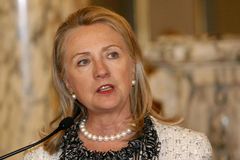 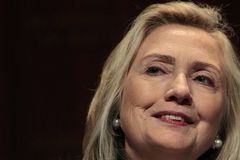 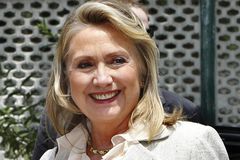