High atop the Niagara Escarpment, the Brock Monument seemed as lofty and enchanting as Shangri-La when the rain clouds parted and it came into view. The cycle path was mercifully gentle as we started climbing toward the 19th-century stone column, but then again, we were hauling a pair of bike trailers containing two infants, their overnight paraphernalia, our luggage, and the spoils of visits to various tasting rooms. And we were running late for our Sunday afternoon train. This Niagara wine tour was turning into quite the adventure.

Fact is, the words "adventure" and "Niagara wine tour" rarely appear in the same sentence. These jaunts typically involve leisurely drives or bicycle rides between the peninsula's bucolic vineyards (often book-ended by gruelling journeys along the infamously busy Queen Elizabeth Way). But it's amazing what the presence of two eight-month-olds - and the new Bike Train service from Toronto - can do.

On Saturday morning, Michael, Allana and Olive Lagimodière pulled up in front of Union Station just as my wife, Angela, was extricating Ava from her car seat. Since we knew we'd be carting all our gear around by bike, there were no Jolly Jumpers or Electro-Magnetic Baby Hypnotizers in the satisfyingly small pile of luggage taking shape on the sidewalk. Just one backpack and bicycle per person, along with a plastic-wrapped, unassembled tandem bike trailer from Mountain Equipment Co-op. (We planned to rent another one from Zoom Leisure in Niagara-on-the-Lake.)

After checking in, we proceeded to Platform One, where our ride - a 56-passenger Via Rail car - was being boarded by Spandex-clad keeners and more casual cyclists such as ourselves. A few toddlers could be spotted milling about, but Ava and Olive were definitely the youngest passengers.

The Bike Train differs from Via's usual Toronto-Niagara Falls run in that it includes a luggage car fitted with bike racks. It's the brain child of Justin Lafontaine, who came up with the idea during a cycle tour of Niagara in April, 2006. At that time, Lafontaine found there was no convenient way for car-less cyclists to transport bikes to the region from the Toronto area. After forging partnerships with the City of Toronto, Government of Ontario, Niagara-on-the-Lake Chamber of Commerce and Via, the Bike Train made its first, sold-out run last month. (This summer, the service is offered over four weekends.)

"It's a hassle-free, environmentally friendly way to start and end a Niagara getaway," said the 32-year-old former director of Toronto's Green Tourism Association as he chatted with passengers. "If the response from the public and our sponsors continues to be positive, we plan to package more accommodations and tours with the train next summer."

This would also help visitors, as Saturday night-only accommodations in Niagara-on-the-Lake are difficult to find on summer weekends, and few bed-and-breakfasts seem to cater to young families.

With our rooms (and cribs) squared away, the joys of packing light was soon replaced by the joys of speeding past vehicles on the sluggish QEW. Coffee was served, Ava and Olive napped, everything was going according to plan.

I should have known better. When the Niagara Wine Tours International shuttle bus dropped us off at the company's office in downtown NOTL, I discovered that our unassembled bike trailer was missing a key component: the hitch that attaches it to an actual bike. "Well, that'll make it easier to pull," someone joked as we crammed both kids into the rented tandem trailer for a half-day guided tour of the surrounding vineyards.

The first few minutes of the outing were sketchy at best. The comments of our guide, a stunningly patient and helpful B&B owner named Jeff Weir, were mostly ignored as parents took turns adjusting infant sun hats and worrying about the wobbliness of the trailer's left wheel. Eventually, however, the steady bumps in the path lulled the kids to sleep as we made our way to Marynissen Estates, the first of three wineries we would visit that hot and sunny afternoon.

Thanks to Weir's local connections, we had the good fortune to meet the vineyard's founder, John Marynissen, on his porch near the entrance to the 17-year-old winery. As we sat around a patio table sampling a chilled bottle of Sandra's Summer Blend, Marynissen, 83, reminisced about the region's plonk-filled past, and praised his daughter Sandra's dedication in turning the estate into an award-winning vintner.

We went on to sample more fine vintages at the nearby Riverview and Lailey wineries, then pedalled back along the river, past the earthen ramparts of Fort George, to the tour company's office.

After moving the rental trailer's hitch to the roomier Mountain Equipment Co-op model - and arranging for a second carrier for Sunday - Angela and I hauled Ava to the nearby Harbour House. This four-year-old, colonial-style boutique hotel is an ideal spot to relax after a day of wine touring, as it blends a serene, Maritime ambience with plush amenities including every cyclist's best friend: the oversized whirlpool tub.

With Ava's diaper changed and our muscles well-soaked, we headed out to meet the Lagimodières for dinner at the Charles Inn. Our risky plan was to dine on the restaurant's lovely wraparound porch with both kids in the bike trailer (hopefully, the day's excitement would knock them out). To our surprise, it worked: We had a memorable meal without even having to deploy the hotel crib Michael and Allana brought along as backup.

Well rested and breakfasted, we were feeling confident about our self-guided tour on Day 2. After all, we had one extra trailer and nearly five hours in which to cover the 20 kilometres of pristine bike path between NOTL and the Via station in Niagara Falls.

As it turned out, Sunday's tour started, and ended, at Reif Winery. After adding several bottles to our collection, the day's 40-per-cent probability of precipitation turned to 100 per cent. Huddling under a gazebo, we realized we would have to make a break for it in order to make our train. Out of nowhere, Weir appeared, and made a valiant attempt to find us a ride. But to no avail - when the deluge let up a bit, we battened down the trailers' canopies and hit the trail. The last thing I heard as I pedalled away was Weir's pledge to find a van and catch up with us somewhere along the path.

We seemed to be making good time as we approached the escarpment, but by the time we reached its top it was just past four, and we knew we were cutting it close. Suddenly, Weir pulled up in a rickety Zoom Leisure panel van. With less than an hour till departure and about eight kilometres to go, we gladly accepted a ride.

As we careened down the Niagara Parkway, crammed into a windowless van with a half-dozen bikes, our tour guide-turned-saviour jokingly yelled, "and on the left, you'll see the botanical gardens."

I laughed, partly at his dry humour, and partly because for the rest of our trip, someone else would be hauling me around. 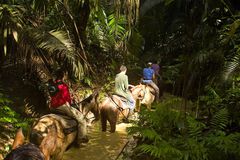 Quebec, through a child's eyes
August 23, 2008
Follow us on Twitter @globeandmail Opens in a new window
Report an error Editorial code of conduct
Due to technical reasons, we have temporarily removed commenting from our articles. We hope to have this fixed soon. Thank you for your patience. If you are looking to give feedback on our new site, please send it along to feedback@globeandmail.com. If you want to write a letter to the editor, please forward to letters@globeandmail.com.
Comments