Spring seems to be skipping 2018 in Canada. A bit disappointing for those who’d been looking forward to doing anything outdoors during March and April. And while it might feel like the entire world is sitting under a shroud of overcast, believe it or not, there are places where the sun is actually shining right now. Many of which are just a short plane ride away. Here are five spots where you can get a quick weekend escape to sunshine, and still be back to bone-chilling temperatures and grey skies by Monday morning.

The Valley of the Sun hasn’t reached shut-the-airport-down hot this time of year, which means golf at any of the area’s nearly 200 courses or hikes up Camelback Mountain can be downright pleasant. You can also sip cocktails by the luxe pool at Mountain Shadows, which as the name suggests sits right at the base of Camelback. If you have kids, or just enjoy splashing around like one, Phoenix has three water parks to hit, from River Ranch at Pointe Hilton Squaw Peak, to the seven-acre park at Arizona Grand Resort, to simulated surfing on the Kierland FlowRider at Westin Kierland.

The Desert Botanical Garden is always a calming place to spend an afternoon, and this spring in addition to strolling through desert landscapes you can also catch Jun Keneko’s sculpture exhibit and the butterfly pavilion. There’s also outdoor baseball on nights when the weather is cool enough, as the Arizona Diamondbacks celebrate their 20th season. Sound enticing? Well you’re in luck, as Air Canada Rouge just started a new, nonstop route from Montreal with three weekly flights.

Poor little Key West had a spot of weather this past fall, but since around December this quirky island at the end of the Florida Keys has been up and running at full strength. The scenic, three-plus-hour drive from Miami has changed after Hurricane Irma, as much of the vegetation by the side of the Overseas Highway was blown away and ocean views abound the whole way down. Once in Key West, you’ll want to do the requisite drinking along Duval Street, at famous spots like Captain Tony’s, Irish Kevin’s, and the Hemingway favourite Sloppy Joe’s.

Speaking of Hemingway, his long-time residence on the island is open for tours, complete with the six-toed cats descended from the writer’s old pet. There’s plenty of jet skiing, snorkelling, and scuba diving here, with the largest stretch of coral reef in the contiguous United States just offshore. For a true Florida experience, head over to Dry Tortugas National Park, where you’ll ferry out to an old fort set on mangrove islands, and camp overnight out in the middle of the ocean.

Albert Hammond might have been exaggerating a little when he sang, “It never rains in Southern California.” But in the spring, your odds are pretty good you’ll stay dry. Los Angeles and San Diego are the big names in SoCal, but tucked in-between you’ll find Orange County with all the perfect weather, wide beaches, and world-class surfing, minus most of the traffic and crowds.

For a real hidden gem head inland to Irvine, where you can bicycle through picturesque California hills, with sweeping views of canyons and rivers. If you’re not super fit, Pedego bike tours offers electric-bicycle tours with all the nature and a lot less work, and might even give you beer for your effort at the end. It’s also home to one of Orange County’s highest rooftop bars at the brand-new Marriott Irvine Spectrum.

Summer crowds in Austin are often overwhelming, thanks to all the live music, craft beer and inventive food. Best to go in this lull between spring break and summer holidays, when the weather is still pleasant, school at the University of Texas is still in, but every stag party in North America hasn’t quite yet come to town.

Since you’re in Texas, barbecue is a must. The line at Franklin’s is famous, but if you don’t feel like spending your precious sun time shuffling through a queue, La Barbecue, Stiles Switch, and John Mueller’s Black Box are just as good with a fraction the wait. Head out to Salt Lick Barbecue, and you can pair that smoky brisket with a tasting from the on-site winery.

To make the most of the sun, hit Barton Springs where the massive spring-fed pool and nearby river won’t yet be overrun with screaming kids. Or drive a bit down the highway to San Marcos, grab a cooler of beer, and spend the day floating down the San Marcos and Guadalupe Rivers.

When you picture the Caribbean, you might summon visions of emerald hills cascading down into blue waters, with the occasional tropical storm blowing through in the afternoon to cool everyone off. Not the case in Aruba, where the trade winds keep the island nice and dry, offering sunshine every day of the year. It’s a slice of desertscape stuck on a Caribbean island – a different kind of tropical experience but one that’ll guarantee plenty of sunshine.

April and May are low season in Aruba, meaning you won’t have to ask too many people to get out of your selfie in front of the Divi-Divi tree on Eagle Beach. You’ll also find ample space along Palm Beach, as you enjoy the white sand stretching into the turquoise water. If you’re looking to get out into nature, hit Arikok National Park, a breathtaking desert that takes up nearly one-fifth of the island with limestone bridges and swimming holes all along the coast. Here you can take ATVs through the desert, ride horses on the beach, or hike to secluded grottos. The landscape in Aruba might not be what you expect, but if you’re looking for guaranteed sun, it’s your best bet in the Caribbean right now. 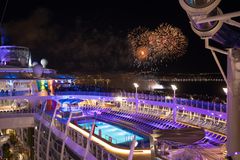 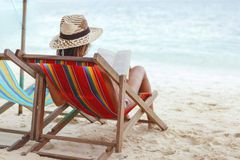 Tinos is the wild and raw Greek island of your dreams
April 27, 2018 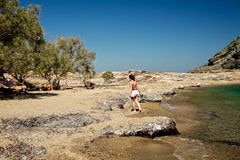