It’s only a 10-minute drive from downtown St. John’s to the village of Quidi Vidi, but it feels a world away. As I watch through the window, stretches of businesses give way to homes and then to a harbour lined with colourful boats and dramatic cliffs. If this were a postcard, Quidi Vidi Brewing would sit at its centre.

Light floods the brewery’s sizable taproom thanks to windows that span most of three walls, showcasing the small harbour. “People ask if we built them for the view,” says Justin Fong, the brewery’s director of sales and marketing, as he points at the fishing shacks dotting the coast. They didn’t. The brewery was once a fish plant serving the local industry.

Fong and I share a few flights of beer, the best way to experience this ever-changing 16-tap list. Today it offers a wide swath, from traditional German lagers to new American ales such as hazy New England IPAs. Iceberg, Quidi Vidi’s best-known beer, has long been on my to-drink list. This unique lager uses water harvested from the coast’s famous spring icebergs. It’s crisp as a winter day with tight bubbles and a light finish.

You won’t find much Newfoundland craft beer at the provincial liquor store, but don’t be fooled. This salt-swept island’s beer industry is growing fast. From 2017 to 2019, it ballooned from three breweries to 18, with about one third available in the capital, St. John’s, making this an ideal reason to visit Canada’s easternmost province. That the city’s downtown, aside from being built on a steep hill, is easy to navigate by foot is, of course, a benefit for those who want a weekend getaway to imbibe.

All too soon, I’m headed back downtown with a backpack full of cans to take back home to Nova Scotia. Up next is Bannerman Brewing Co. Its name recalls the St. John’s Great Fire of 1892 when 11,000 displaced residents built a tent city in Bannerman Park, a short stroll from the modern-day brewery. Soaring ceilings and long communal tables lend St. John’s newest brewery a vibe of European beer hall meets hip Toronto café. Newfoundland is notoriously chilly in June, so a roaring fire in the glass-covered fireplace adds warmth and ambiance. It’s still early afternoon, so just as many patrons order coffee and pastries as a beer.

Bannerman's six taps focus on American and European-style ales, but no flights. After a handful of tastes, I settle on the farmhouse saison named Sparks Joy. It is soft and clean; its blend of French and Belgian yeasts presents notable clove and fruit flavours with a bone-dry finish.

The Duke of Duckworth pub is my next stop. The tucked-away entrance lends the bar a speakeasy feel. A long wood bar and stained-glass hanging lights evoke a classic British pub until you notice the video lottery terminals off to one side. The Duke, as locals call it, is as relaxed as it gets. Journey plays on the stereo as I peruse the menu and beer list.

Set on the fish and chips, I ask my server to pick a beer. The 20-tap list is long, but he skips straight to the craft options and suggests Irish Newfoundland Red Ale from Storm Brewing.

Storm, founded in 1995, doesn’t sell in retail stores so this is an opportunity I don’t pass up. It’s lightly hopped with warm toasted malt flavours for a balanced twist on this traditional style. The malt-heavy ale pairs well with the flaky fish and salty, malt-vinegar soaked chips.

Day 2 dawns blustery. Before delving back into research mode, my travelling companion and I hike Signal Hill National Historic Site to counteract the calories we’ll drink later. The winding and steep North Head Trail offers a panoramic view of the city. We spot an iceberg off the coast. Our tourist duties complete, we stroll downtown to quench our thirst.

YellowBelly Brewery and Public House is in a stonework building on the corner of George and Water streets. The former mercantile survived the Great Fire. The bar and dining area feature dark wood, weathered stone and brick as a nod to the past. By 1 p.m., the dining room bustles. Because the placemat-style menu features an empty circle for each taster-size glass next to each beer’s description, ordering flights is an obvious choice. YellowBelly’s core tap list hews close to classic English beer styles with a couple of seasonals and ciders. We taste everything. The standout is St. John’s Stout. Soft and pillowy, added lactose sweetness and notes of coffee linger long after each sip.

I’m on my own for my next mission. Newfoundland’s second largest city, Mount Pearl, is about 15 minutes from St. John’s by car, or an hour by public transit. Seeing my confused look as I step off the bus, the driver points to a sleek industrial building. I’m surprised when I step into a room with a soaring ceiling and patio lights strung just above my head.

Landwash Brewery co-owner Chris Conway greets me warmly with a glass of Brackish gose. Tart and refreshing, it zings with lemony Citra hops and a dose of sea salt from the Newfoundland Salt Company.

Originally from St. John’s, Conway and Christina Coady worked in Toronto’s beer industry for years before coming home to start Landwash. “We always knew we wanted to come home,” Conway says. “When we saw the industry start to grow here, we said, ‘It’s time.’” The brewery, tap room, and retail space opened in December, 2018.

The tap room’s picnic tables add to the outdoor vibe, as does the food truck parked in some surplus brewery space. Saucy Mouth dishes up gourmet dressed fries and noodle bowls.

Again, I leave with a backpack full of cans, wondering what weight marks my suitcase as heavy. 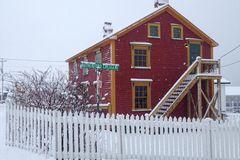 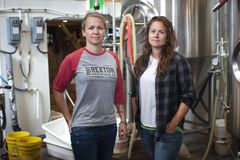