On the northeastern flank of British Columbia's 2,408-metre Terminator Peak, a group of 10 skiers, some with avalanche transceivers in hand, charge into a small stand of pines.

"Over here!" shouts Martha Handford of Canmore, Alta., as soon as her beeping device locates a buried target. Her Australian rescue partner, Scott Burley, immediately deploys an extendable probe and begins stabbing it into the snow in a spiral pattern. A direct hit is made in less than a minute, prompting the pair to start digging like crazy.

It's a scene that would send chills down the spine of any back-country veteran; thankfully, this isn't a real rescue. There are no physical signs of an avalanche and two ski patrollers in red jackets shout instructions from a groomed trail nearby. If any doubt remains, it evaporates when a member of the group pauses to snap a selfie.

The skiers are in the midst of a weekend-long avalanche skills training (AST) course run by Kicking Horse Mountain Resort. The six men and four women, from the ages of 23 to 63, aren't locals or staff. All of them are here on vacation.

Until quite recently, most resorts did little or nothing to educate visitors about avalanche avoidance and survival. Ski areas such as Kicking Horse spend hundreds of thousands of dollars each year on snow-safety measures such as forecasting, signage, fencing and ballistics, but they aren't technically responsible for the terrain outside their boundaries or for lift-ticket holders who choose to enter it. So safety training for guests was typically left to third-party outfitters and alpine organizations.

What has changed? Back-country skiing has exploded in popularity in the past decade, so now many of the resorts that tacitly enable the inherently risky activity are working harder to educate resort skiers on back-country safety. Most of British Columbia's big resorts – Kicking Horse, Revelstoke, Whitewater, Sun Peaks and Whistler Blackcomb, to name a few – have all been expanding their snow-safety education programs over the past five years.

"We're at the start of a shift in resort mentality," says Sean Nyilassy, a member of Kicking Horse's mountain safety department who leads the weekend-long programs. "From our boundaries, you can instantly enter uncontrolled back-country terrain, where inexperienced or uneducated skiers can run into trouble. We still see a lot of people out of bounds without the proper equipment, and for every 10 we see there are 100 who get away with it. This puts our guests and our rescue personnel at risk. But with the proper education, the risk goes down."

Snow-safety education got a shot in the arm in 2004 when Avalanche Canada's headquarters opened in the town of Revelstoke, B.C., 150 kilometres west of Kicking Horse down the TransCanada Highway, the aptly nicknamed "Powder Highway." Among much else, the NGO issues daily avalanche forecasts for Canada's most popular back-country regions via its website and smartphone app – both of which are invaluable AST tools – and shapes AST curriculum. Revelstoke is a fitting home for the centre, given that snow safety is such an inescapable fact of life in this part of the world. A few blocks away, the new Land of Thundering Snow exhibit at the Revelstoke Museum & Archives explores avalanche research and snow science, with an online component that focuses on skier safety both in and out of bounds.

Eight years after Revelstoke hosted its first course, a variety of AST programming occupies just about every weekend from December to March. A day-long companion rescue skills course, meanwhile, is designed to refresh rusty skiers and educate time-crunched visitors.

Then there's the "Avalanche Ranch," which Revelstoke unveiled last season. The wireless transceiver training area, the first of its kind in Canada, occupies a hockey rink-size basin at the top of the resort's busiest lift and allows skiers to hone their transceiver and probe skills. "This is as much about awareness as it is about ability," explains avalanche forecaster Chad Hemphill. "It gets the seriousness of back-country safety across more effectively than a bunch of signs."

Hidden under the snow blanketing the Ranch are eight targets. Each is toggled on or off at a junction box, and when each is struck the box emits a loud beep. Hemphill's demonstration draws the attention of several youngsters, who shout encouragement to the target-seeking travel writer struggling through waist-deep snow.

Young skiers such as these, and their worried parents, are the focus of other resort-based programs such as Whitewater's month-spanning "Avalanche Awareness Beyond the Boundaries" – a free course now in its fifth year – and Sun Peaks' All Mountain Skills weekend camp, which also launched last season.

"What do kids want to do? They want to duck the rope and ski out of bounds. And I would say the vast majority of them are unprepared," says Bodie Shandro, who runs Sun Peaks' camp. "Kids show up and say, 'I'm here because my dad says I have to be here,' but by the end of the day, they're totally into it."

The camp's creation coincided with the opening of Gil's terrain (which can only be reached on foot) atop Mount Tod at the Kamloops-area resort. "People don't think of Sun Peaks as extreme, but that doesn't mean there are fewer inherent risks here. We have snow, we have weather and we have trees," Shandro says, and then proves his point by popping off his skis and jumping into a tree well near the top of Gil's. He's immediately up to his armpits in snow. "I show the kids this, then tell them to think about being upside-down in here."

Where you can take courses

There are several resorts to choose from for avalanche skills training courses. Basic back-country equipment – backpack, shovel, avalanche transceiver and probe – are required for all courses and are available for rent at the resorts.

Whitewater Ski Resort: Weekend AST 1 courses ($195) are offered four times from January to March. Single-day Avalanche Awareness Courses ($35) run on select weekends. The free, month-long avalanche awareness beyond the boundaries program, open to youth aged 12 to 18, runs on weekends throughout January and February, while the new Whitewater Backcountry 101 clinic ($150, including lunch) is available Fridays and Saturdays, or upon request other days. skiwhitewater.com

If you're taking a course in Revelstoke, B.C., make time for the avalanche exhibit at Revelstoke Museum & Archives in town, or view it's online history of Canadian avalanches at landofthunderingsnow.ca.

The writer was a guest of Destination British Columbia. It did not review or approve the story.

Editor's note: An earlier version of the article described the route from Golden to Revelstoke as Highway 95A. It is in fact the TransCanada Highway.

A ski instructor’s advice for your first time on the hill
November 19, 2015 Portes du Soleil’s sprawl of resorts between France and Switzerland are a skier’s heaven on Earth
November 19, 2015 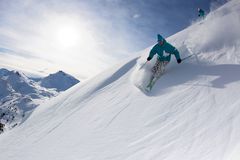