It's the suitcases that finally reduce me to tears. A pile of suitcases behind a glass wall in one of the endless cell blocks at Auschwitz. Each is carefully labelled in bold letters with a name – the names of men, women and children who probably thought that they had already experienced the worst that life could deal them, being forcibly relocated from their home.

"Jews were told they were going for resettlement in the East," explains my guide, Dagmara Wiercinska. They couldn't have imagined the horrors that awaited them here, about 64 kilometres west of Krakow, Poland.

I've already seen too much. Touring block upon block, Dagmara has explained how Holocaust prisoners here were treated as commodities. Whatever few possessions they brought with them – things they thought they would need to build a new life – were taken from them upon their arrival and stored in warehouses which guards called "Canada," because it was viewed as a place of enormous wealth. What remains here now are those items that the Nazis had not yet sold when Auschwitz was finally liberated on Jan. 27, 1945.

There's a swimming-pool sized pit piled high with pots and pans. Rooms filled with shoes, clothes, crutches and prosthetics, and on and on. The most intimate room, and the only place where you're asked not to take pictures, is filled with human hair – tangled masses and long braids – shorn from the heads of prisoners, which would've been used to make a rough, burlap-textured fabric.

Yet somehow, I've kept my emotions in check, until now, looking at all those suitcases.

"This is where people often break down," says Dagmara, who grew up in the adjacent town. She was always aware, to some degree, of what had happened here. When she was seven years old, she read a book called Childhood Behind Barbed Wire, by Bogdan Bartnikowski, who was a child in the camp.

"Also, it was a part of local history," she says. "We celebrated the liberation anniversary every year."

Dagmara, who majored in philosophy at university, trained for six months to be a guide at Auschwitz and the nearby Birkenhau concentration camp. I tell her that I could never do her job, but I'm glad that there are people that do, because these victims need to be remembered.

She says the work was so emotionally draining that she had given it up at one point. "I took a break for about a year. I thought I would never do it again." But a conversation with another guide and former prisoner helped to change her mind. "He said they appreciate that someone wants to tell their story," she explains. "It is very encouraging."

So she continues to lead these tours. Day after day, she takes visitors past shocking photos of naked women being herded to a gas chamber and piles of bodies – photos smuggled out by a prisoner named Alberto Errera, as proof of the atrocities that were happening here. She ushers us past walls of photographs of half-starved and sometimes beaten prisoners in their striped uniforms.

She points out the postcards that they were forced to write home, assuring their families that they were starting their lives over in some new, undisclosed location. "By 1944, there were some rumours [about what was actually happening], but deportees from Greece and Hungary were often unaware of their fates," Dagmara says.

She takes us to the Death Block, where the Nazis experimented with ways to kill people. Behind one gate leading into the starvation cell, there's a candle presented by Pope John Paul II. As we leave, I pull a cold steel gate shut behind me with a shudder; it's the first thing I've touched since I entered Auschwitz.

Outside, the sunshine, the pert yellow heads of dandelions and the birdsong seem so completely incongruous. It's a brief respite of something approaching normality before we reach the crematorium, where 700 unburned bodies were found at the end of the war.

Afterward, we visit Birkenau, where there were once 300 barracks, each housing up to 500 people. We peek briefly into one drafty bunk room, and another housing rows of cement toilets – just holes in a long bench – in yet another assault on their dignity.

Precious few escaped Auschwitz-Birkenau, but Dagmara tells us one remarkable tale of four prisoners who managed it, dressed in SS uniforms in a Gestapo car. Their story, she says, is told in a documentary called The Runaway.

Maybe one day I'll see it. But not just yet.

I can't face any more at the moment. I'm just grateful that Dagmara and folks like her have the strength to continue to tell these stories, so that they're never, ever forgotten. 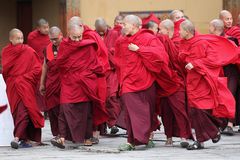 At a wedding in Armenia, a marriage of past and present
January 16, 2017
Follow us on Twitter @globeandmail Opens in a new window
Report an error Editorial code of conduct
Due to technical reasons, we have temporarily removed commenting from our articles. We hope to have this fixed soon. Thank you for your patience. If you are looking to give feedback on our new site, please send it along to feedback@globeandmail.com. If you want to write a letter to the editor, please forward to letters@globeandmail.com.
Comments