A Greek shipping firm accused of operating a vessel that spilled thousands of litres of fuel into Vancouver's English Bay will be prosecuted regardless of whether it participates in the legal proceedings.

The charges followed a Transport Canada investigation into the MV Marathassa, which leaked 2,700 litres of bunker fuel in April 2015.

Alassia had argued it was not properly notified about the proceedings, but Judge Kathryn Denhoff says in her written decision that the summons was successfully delivered on two occasions.

Denhoff says the summons was served to the company's lawyer as well as to the captain of another vessel operated by Alassia, who she says qualified as a company representative despite being a contract employee.

The trial against both Alassia and the Marathassa is scheduled to begin on Feb. 26.

B.C. trial should proceed with or without accused operator of MV Marathassa: Crown
January 3, 2018 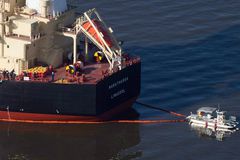 Greek company must face B.C. court for 2015 MV Marathassa fuel spill
April 4, 2017
Company accused of operating MV Marathassa skips court date in B.C.
April 5, 2017
Report an error
Due to technical reasons, we have temporarily removed commenting from our articles. We hope to have this fixed soon. Thank you for your patience. If you are looking to give feedback on our new site, please send it along to feedback@globeandmail.com. If you want to write a letter to the editor, please forward to letters@globeandmail.com.
Comments are closed