Members of the Heiltsuk Nation are hoping cleanup crews can protect clam beaches and salmon streams after a tug pushing a massive fuel barge ran aground near Bella Bella in the heart of British Columbia's Great Bear Rainforest.

The barge, which has the capacity to carry 52,000 barrels of oil, was empty when it hit Edge Reef off the northern tip of Athlone Island early Thursday, but the tug Nathan E. Stewart contained an estimated 60,000 gallons of diesel.

An unknown amount has spilled, but the U.S. company that owns the tug and barge said resources "to meet a worst possible discharge have been activated and are either on scene or on route."

In plain sight: How the Marathassa oil spill took hours to find

In a statement, Jim Guidry, incident commander for Kirby Offshore Marine, a division of Kirby Corp., said a full response was launched shortly after the accident occurred.

"Western Canada Marine Response Corporation (WCMRC) was activated and have deployed vessels and crew from their response base in Prince Rupert," he stated.

WCMRC is an industry-funded, oil-spill-response organization with bases in Vancouver, Prince Rupert and Duncan, on Vancouver Island.

"A priority for the response will be developing a plan to remove all diesel aboard the tug and to safely salvage the vessel," Mr. Guidry said.

"It's our worst nightmare," Heiltsuk Chief Marilyn Slett said after coming out of an emergency meeting at the band office late in the day.

"The tug boat has sunk, it sunk around 10 to 10 this morning and it's still attached to the barge. I guess it's sort of permanently attached so I'm not sure what they are going to do about that," she said.

The 28-metre tug is secured to the stern of the 90-metre fuel barge with a hinged connection. Combined, the unit is known as an articulated tug barge. ATBs are increasingly being used on the West Coast to transport bulk loads of oil and diesel. The Nathan E. Stewart routinely runs between Vancouver and Alaska through the Inside Passage.

Two weeks ago, the Duke and Duchess of Cambridge visited Bella Bella to dedicate B.C.'s treasured Great Bear Rainforest as part of the Queen's Commonwealth Canopy, an initiative which seeks to conserve globally significant forest regions.

"One of the things we mentioned during that whole Royal tour was that we're a community that has worked so hard to preserve the integrity of our land and our sea," said Ms. Slett. "Being able to showcase that to the world a couple of weeks ago, we were very happy … but today is devastating."

She said the ATB ran aground in an important traditional harvesting area.

"This is an area where we harvest up to 25 species … things like clams, herring spawn on kelp, it's a migration area for salmon," she said. "Words can't express how I'm feeling right now."

She said last year about 50,000 pounds of manila clams were harvested from beaches there.

"We are due to start that harvest in about three weeks, so it's really going to devastate the local economy here," Ms. Slett said.

She said neither the Coast Guard nor the tug boat's crew were able to contain spilled fuel because of a shortage of equipment.

"There was no world-class oil response demonstrated here today," she said, making reference to the B.C. government over its promise to provide a top-tier spill regime. "Was anyone prepared? No."

In a statement, the Canadian Coast Guard said the accident was reported at 1:13 a.m. The CCG ships Bartlett and John P. Tully responded and all seven crew members were rescued from the tug, with no injuries.

Jessie Housty, of the Qqs Projects Society in Bella Bella, said crews and equipment coming from Prince Rupert would take about 22 hours to get to the scene and by then clam beds may be fouled.

"It's devastating to know there is so little that you can do and infuriating to know that we've been trying to raise concerns about shipping safety issues and the danger of this kind of vessel traffic in this area for years and years," she said. Environmental activist Ingmar Lee has long been campaigning to stop ATB traffic along the inner coast, warning an accident was inevitable.

"I feared just exactly what happened today," he said shortly after returning from the accident site.

Mr. Lee said he was there when the tug went down.

"As soon as it sank there was a huge slick on the water and a severe stench of fuel," he said.

Vancouver Coast Guard base closed by Conservative government to re-open
May 17, 2018 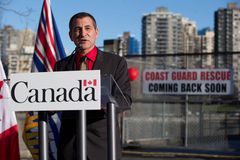 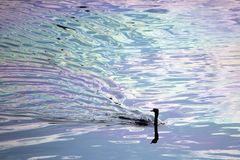 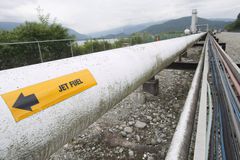