As he prepares to leave office as one of the most admired and important premiers in Saskatchewan's history, Brad Wall has few regrets. But certainly one disappointment that he departs with is the fractured state of the West, one symbolized by his continuing public feud with Alberta NDP Premier Rachel Notley.

With the Saskatchewan Party poised to pick his successor this weekend, Mr. Wall has been able to reflect back on a decade in power, one in which he unquestionably upgraded Saskatchewan's standing in the federation while emerging as arguably the province's most popular leader since the iconic Tommy Douglas.

At the same time as he helped elevate his province to Have, from perennial Have Not status, Mr. Wall earned the respect of his fellow first ministers, over time becoming the senior statesman among the group and someone whose opinion and advice was regularly sought out on a range of political and economic matters.

"It has been an incredible run, something that will forever be the honour of my working life," Mr. Wall told The Globe and Mail in an interview in his legislative office this week. "I'm going to miss it."

When Stephen Harper stepped down as leader of the Conservative Party in 2015, Mr. Wall was unofficially anointed as conservatism's de facto standard-bearer in Canada, a development that revived hopes he might run federally. It was a siren call he repeatedly ignored, and steadfastly maintains he has no interest in. That said, he does acknowledge concerns about the growing challenges conservatism faces in a modern and increasingly urban-centric world.

Mr. Wall began his stint as Premier in 2007, with two ideological soulmates in charge to the west of him, in B.C.'s Gordon Campbell and Alberta's Ed Stelmach. But the chemistry he always felt with conservative-minded leaders in those provinces was upended radically in 2015, when Ms. Notley's NDP ascended to power, precipitating the ill will witnessed between the two ever since. The Saskatchewan Premier's political discomfort was compounded when Justin Trudeau's Liberals were elected in Ottawa that same year.

"I believe the current government in Alberta is not completely comfortable with what makes Alberta tick. If you have a premier who says 'we're the embarrassing cousins that nobody wants to talk about,' well, I just can't imagine those words ever entering my head about this province, no matter what it is that might have happened."

The matter that is making Ms. Notley uneasy, Mr. Wall insists, is the province's oil-based economy. It is not compatible with what he describes as the NDP's new ideological underpinnings, which he suggests places the environment above all else. He says this type of thinking is reflected in the Leap Manifesto, the controversial, much-derided document compiled by an array of left-wing activists and Indigenous leaders across the country calling for radical changes in NDP policy, especially as it relates to protecting the environment. It was denounced by Ms. Notley.

"That's what's keeping the West apart right now," Mr. Wall said. "It's not that we have different parties in power. It's this new version, this new iteration of New Democrats [in B.C. and Alberta] that don't really like a lot of what Western Canada does to pay the bills, or, at least, are not comfortable with it."

Last spring, Mr. Wall urged energy corporations headquartered in Calgary to relocate to his province, offering a range of incentives and the promise of a jurisdiction free of carbon taxes to operate in. It was a move seen by many as deliberately and needlessly provocative, one that would only inflame tensions between the two provinces. Later in the year, Mr. Wall's government attempted to ban any vehicles with Alberta licence plates from entering job sites in his province. That threat was abandoned this week.

Mr. Wall rejects any suggestion that the licence plate tactic was an overreach by a government singularly focused on putting the screws to a neighbouring administration with which it is ideologically at odds. He similarly rejects any characterization of his feud with Ms. Notley as a "war" that he's been intent on winning at all costs. "I don't have a war with Rachel Notley and I'm not going to have you write that," Mr. Wall said. "We simply don't agree on everything."

The Premier said the decision to introduce the ban on Alberta licence plates was in response to the Alberta government's policies around beer pricing that threatened 100 jobs in his province. He said the retaliatory action was foreshadowed in last year's Throne Speech and should not have come as a surprise to anyone. The licence plate sanction was rescinded, the Premier said, after Alberta promised to honour the outcome of its appeal of an earlier trade ruling that went against its new, out-of-province beer-pricing regime. (It never said it wouldn't.)

Of course, Ms. Notley has not been Brad Wall's only target of late. The Prime Minister also drew his wrath, over resource development policy generally and the national carbon tax specifically. Mr. Wall not only believes the policy is wrong-headed, he resents the way it was foisted on the provinces with little to no consultation. He believes Mr. Trudeau is every bit the dogmatic unilateralist his predecessor, Mr. Harper, was often criticized for being.

Mr. Wall likens the new measures the federal government has introduced around resource-development, especially the clampdown on greenhouse-gas emissions and changes to National Energy Board protocols, to the intrusion made into this area by Mr. Trudeau's father, Pierre, back in the early 1980s with his government's highly unpopular national energy program.

"The NEP wasn't around for long because you had two provinces in the West led by an NDP premier here in Allan Blakeney and a Progressive Conservative premier in Alberta in Peter Lougheed who were against it and who influenced federal politics to some extent," Mr. Wall said.

"If we feel there is some kind of next generation NEP coming from the next generation of the same family that is now the Prime Minister, then I think the hope for restoring some balance is going to be the provinces in the West working together. That is my hope for the future." 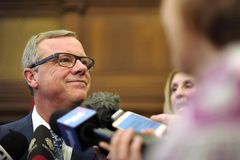 Opinion
Saskatchewan Premier Brad Wall gets going while the going is good
August 10, 2017