The smallest gender pay gaps and highest salaries were found in nursing and engineering fields, where women between the ages of 25 and 34 earned more than 96 per cent of men's wages.

Median engineering salaries for all graduates were above $77,000. Nursing followed closely at just more than $75,000, while the pay cheques of those with a humanities BA were $30,000 lower.

The sustained impact of the oil boom also led to wages for young men in the skilled trades rising faster than any other group of workers. In Alberta, Manitoba and British Columbia, graduates with an apprenticeship certificate saw earnings almost equal to those of all bachelor-degree holders. In Saskatchewan, the earnings of these graduates exceeded those of men with a university degree. The data released Wednesday do not capture the effect of the downturn, and more recent surveys have revealed pay drops in the West.

The numbers raise new questions about how today's high-school students are deciding which programs to pursue in college, university or trade schools and if they understand the full range of options.

"Choosing a field within college or university makes a big difference," said Arthur Sweetman, an associate director of the Education Policy Research Initiative (EPRI), a national research group at the University of Ottawa that is working with Statistics and Revenue Canada to study long-term employment outcomes of Canada's graduates.

All education after high school is beneficial, he added. "All of these fields, with the possible exception of fine arts, are doing way better than a high-school graduate," he said.

Not all science or technology fields have outcomes that are as positive or equitable as those in engineering or nursing, others cautioned.

Graduates in physical or biological sciences, for example, have earnings between $53,000 and $61,000 and a gender pay gap of 14 per cent and 7 per cent, respectively.

"The lesson here is perhaps to choose your STEM discipline with some care if you are inclined in that general direction," said Ross Finnie, the director of EPRI.

And low salaries for humanities and arts graduates early in their careers do increase over time.

"There is a particularly big jump between 25 and 34 and 35 to 44-year-olds," said Heather Dryburgh, an acting director-general at Statistics Canada. "It could be that it takes a bit longer to get into the occupation that rewards you for your educational effort," she said.

Professions in which a graduate's education and the skills needed in the job are well-matched, such as nursing or engineering, tend to have a smaller wage gap and good remuneration, she added.

"In nursing, there is a very low overqualification rate for new graduates, they tend to be working in health-related fields and their pay is high. And that is probably true of engineering and computer science, as well," Dr. Dryburgh said.

In spite of the benefits of an engineering career, less than 15 per cent of positions in the profession are held by women. Universities, colleges and companies are now working intensely to recruit more young women.

"What really attracted me to my current company is that I don't have to worry about being a woman to get equal opportunity," said Rowa Abachi, a solution engineer at Salesforce, a North American cloud-computing company. "They are openly talking about the gender gap and the salary gap, and it's empowering and a welcoming message for women."

Last year, Salesforce raised salaries for 11 per cent of its employees after reviewing gender and racial pay differences, spending $6-million to do so.

"I struggled with [pay equity] in every other job, and I knew that no matter how hard I worked and how much respect I gained, I would still make less money than my male colleague, whether it's a gap in pay or opportunities."

As with other female engineers who spoke to The Globe and Mail, she pursued engineering because she had family role models and strong math and physics skills in high school.

"The value of an engineering degree is in problem-solving," she said. "In any meeting, I can point out who has done a technical degree based on their logic and how they process information." 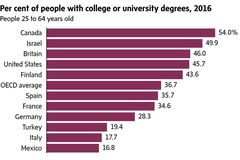 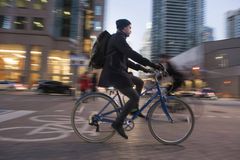