Emerging details of accidental radiation exposure at an Ontario nuclear power plant have triggered an order to investigate the possibility of similar incidents across the country, while raising doubts about safety at Canada's only privately owned operator.

Last Nov. 26, a routine air sample taken at Bruce Power's No. 1 reactor on Lake Huron near Owen Sound detected elevated levels of radiation. The incident is one of the most serious safety breaches at a Canadian reactor in recent memory and poses troubling questions about why Bruce executives assumed - mistakenly, it turns out - that they could send workers in to upgrade a laid-up reactor without exposing them to cancer-causing alpha radiation.

The extent of the radiation problem will not be known until Bruce receives test results for all 195 workers considered most at risk of exposure. At a Canadian Nuclear Safety Commission hearing on Monday, Bruce officials revealed that two workers received a dose exceeding the allowable limit of 25 millisieverts a year under its operating licence. However, they stressed that no one received a dose above the regulatory limit, which allows nuclear employees to receive up to 50 millisieverts of radiation a year on the job, the equivalent of 500 chest X-rays.

Nevertheless, the discovery of radiation has shaken the regulator as well as workers at Bruce.

"I'm disturbed by what I'm hearing," CNSC commissioner Alan Graham said Monday. "I'm wondering, what else is out there that we're not looking at."

The regulator has issued a formal request to all operators in Canada, asking them to investigate whether their workers have been exposed to alpha radiation.

Jim Binns, a general foreman at Bruce who has worked at the nuclear plant for 10 years, said employees relied on the system to protect them.

In an industry where safety is a top priority, such a breach is rare. Michael Binder, president of the CNSC, grilled Bruce officials at a hearing last February for not taking pre-emptive steps to protect its workers against the alpha radiation. The company failed to do so at a time when it is under enormous pressure to complete a refurbishment of Units 1 and 2 at the Bruce A nuclear station.

In an internal newsletter obtained by The Globe and Mail, Bruce Power chief executive officer Duncan Hawthorne expresses concerns that cost overruns and delays could hinder the company's ability to win additional refurbishment projects from the Ontario government. The $4.25-billion price tag for upgrading the two units is $1.5-billion higher than the original estimate, and the project is more than a year behind schedule.

"We have to do a much better job of convincing people if we're ever to do a project like this again [that]we could bring it in on time and on budget," he says in the newsletter.

Transcripts of three CNSC hearings on the alpha exposure and interviews with Bruce officials reveal how the company unknowingly exposed its workers to alpha radiation.

"We've identified that there was a kind of group think around this event," Mr. Hawthorne told federal regulators last May. "And there's a lesson to be learned about that question and attitude."

Mr. Hawthorne explained that Bruce officials "had fallen into the trap" of assuming that the same conditions were present in both Units 1 and 2. He said the accepted industry practice is to test workers for beta radiation because the ratio of beta to the more dangerous alpha is typically 10,000 to one.

On Unit 2, no alpha was detected. As a result, he said, Bruce did not test workers for alpha on Unit 1.

A routine air sample on Unit 1 taken on the morning of Nov. 26 showed elevated levels of beta radiation inside the vault. Workers had stirred up radioactive dust particles when they were grinding the feeder tubes that carry water to the reactor. They were wearing special plastic suits, complete with breathing tubes.

But other workers also inside the massive concrete vault were just wearing coveralls. Many of them inhaled the dust. Further testing showed that the ratio of beta to alpha was seven to one.

Mr. Binder questioned why Bruce had not followed the lead of NB Power, which monitored staff for alpha radiation when it refurbished the Point Lepreau reactor.

Bruce has now installed equipment to detect alpha radiation and monitor employees. Mr. Hawthorne told the hearing that his main priority is their safety and well-being. One employee, he said, sent him an e-mail saying his wife is three months pregnant and asking what he should tell her.

"I look at this more as an important trust issue," Mr. Hawthorne said. "Frankly, it's an investment to restore the confidence of people who will continue to work in these areas."

The recession caused demand for electricity to fall in Ontario in 2009, and the spot market price. But nuclear operator Bruce Power's pretax profits climbed, even though it sold less electricity to a softer market.

Bruce's revised 2009 agreement with the Ontario Power Authority says Bruce will be financially compensated for reduced electricity output, as well as placing a "floor" price for output from its Bruce B reactors.

In return, Bruce is to be solely responsible for costs exceeding $3.5-billion on the refurbishment project. 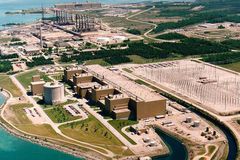 Nuclear plant balks at regulator request to test all employees for radiation
June 23, 2010
Follow Karen Howlett on Twitter @kahowlett
Report an error Editorial code of conduct
Due to technical reasons, we have temporarily removed commenting from our articles. We hope to have this fixed soon. Thank you for your patience. If you are looking to give feedback on our new site, please send it along to feedback@globeandmail.com. If you want to write a letter to the editor, please forward to letters@globeandmail.com.
Comments