The RCMP has been tearing itself apart for months, but the brass is hoping all Mounties will be happy this year with a bit of concrete change: new pants for everyone.

Since he was officially confirmed in his position after a summer of controversy, RCMP Commissioner William Elliott told the force this week he is moving forward with new policies. He will look at structural changes and undertake a management shuffle, but one of the big differences in coming months will be "improvements to regular members' kit and clothing."

The main target will be the Mounties' wool-blend pants, which have to be dry cleaned, creating headaches for officers stationed in remote locations. The officers have to pay much of the bill themselves, given that their "kit upkeep allowance" is $4.90 every two weeks.

"We're coming down with a washable pant," a senior officer said, adding that this is a long-standing beef among members. "That is very important stuff to the front line. I think folks underestimate that this is a very strong sign of change."

Mr. Elliott will also change the makeup of the senior management team. He will have to fill two vacancies, at the top in the Ontario division and the Western region, while other high-ranking positions will open up in coming months because of retirements.

The impact of the moves will be major, as any promotion within senior ranks creates a "domino effect" for an average of eight people down the line, the RCMP officer said.

"In coming days, there will be changes in personnel," the officer said. "There are also retirements on the very near horizon."

It remains unclear what will happen in coming weeks to the assistant and deputy commissioners who complained over the summer to their bureaucratic bosses about Mr. Elliott's leadership style. Their concerns, which erupted into public view, were that Mr. Elliott did not treat his officers with respect and often screamed at or did not listen to them.

In an e-mail to members of the force, Mr. Elliott acknowledged there was "an unhealthy level of tension and internal conflict" within the senior ranks. He acknowledged that some of his own actions caused tensions, adding "that other tensions emanated from the pace of progress in implementing our Transformation Plan."

There is a widespread feeling within the RCMP that it will be difficult for Mr. Elliott's strongest critics to stay in their positions. Insiders refused to speculate on the situation, although everyone in the force will be expected to work together and stop the public bickering.

"There was angst at senior levels," the high-ranking RCMP officer said of the summer crisis. "I think there is a desire for people to start all pulling in the same direction."

Liberal senator Colin Kenny, who has long studied the RCMP, said he is disappointed by the Conservative government's handling of the controversy. He said former CSIS head Reid Morden, who spent 10 days meeting with RCMP officers in the force's headquarters to conduct a workplace assessment, did not have the necessary independence to get to the bottom of the matter.

"I have no doubt this was politically led and that the objective of the government was to protect Prime Minister Stephen Harper from the accusation that he had appointed a dud," Mr. Kenny said.

Mr. Kenny called on officers who were disgruntled with Mr. Elliott's leadership to raise their complaints publicly. "Unless [they]are prepared to come forward, Mr. Elliott will carry the day," he said.

Linda Duxbury, a professor at Carleton University and RCMP expert, said that future reforms will be hard to achieve if the government is seen punishing the complainants for speaking out. "If you shoot the messenger, don't expect more messengers," she said.

In his e-mail, Mr. Elliott called on the force to "contribute to our ongoing efforts to serve and protect Canadians, to establish and maintain a healthy and respectful work environment and to bring about positive change in the RCMP."

RCMP set for shakeup as Ottawa stands by commissioner
September 4, 2010 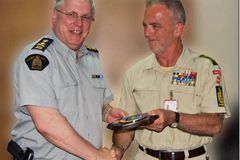