Officials are warning that much of downtown Toronto will experience power outages Tuesday afternoon and evening, in an attempt to reduce the city's energy consumption after Monday's flooding brought massive power outages, shut down the city's subway system, and flooded homes across the GTA.

After Monday's record rainfall caused flooding damage at two of the city's main transmission systems, the city's hydro system is "hanging on a thread," Mayor Rob Ford said in a statement.

As a result, about 70,000 customers in downtown Toronto south of St. Clair Ave West, between Jane Street and Spadina Avenue, will experience "rotating blackouts" starting Tuesday afternoon, Toronto Hydro spokesperson Jennifer Link said. Those customers may not see their power return until Wednesday morning, she said.

As of Tuesday afternoon, Environment Canada warned of more rain for Tuesday evening, and a risk of thunderstorms.

Meanwhile, the mayor asked the rest of the city to help out by reducing their consumption and turning off non-essential electronics.

Toronto Hydro's president Anthony Haines said that the city is asking for 200,000 megawatts of power of volunteer "load-shedding," to reduce strain on the system.

Much of the strain on the energy system is the result of flooding damage at the Richview and Manby transmission stations, which provides much of the city's west end with power.

Hydro One said between 400,000 and 500,000 people were blacked out at the height of the storm, and about 90 per cent of those had restored power by Tuesday morning. Toronto Hydro said about 50,000 of its customers remain without power, primarily in the west end of the city between Highway 427 and Jane Street. Restoring power to those customers depends on repairing the Manby and Richview stations, spokeswoman Jennifer Link said Tuesday.

Mr. Young said that certain parts of the city's west end, like the area between Yonge and Jane and between Bloor to Eglinton, are particularly vulnerable, because the downed stations has left those areas essentially "without a backup."

"The simple analogy is like if you've got a highway that you can't use," Mr. Young said of the damaged transmission stations. By redirecting power around those stations, Mr. Young said, "you're using side roads" and placing strain on the overall system.

The last time the IESO issued a public appeal for reduced consumption was in 2007, during a particularly bad heat wave in Ontario.

In addition to his plea for reduced energy use, Mayor Ford also said that he is asking the city to review its emergency response after Monday's flooding.

"There are many things that worked well last night," Mayor Ford said in a press conference Tuesday. But other areas, such as the way in which information was communicated, may need to be improved, the mayor said.

"Basements were flooding, people were panicking, their hydro wasn't coming on, people needed answers," Mr. Ford said. "It was hard to get answers because it was a little chaotic."

The 126 millimetres of rain recorded at Pearson Airport yesterday beat the previous record set by 1954's Hurricane Hazel, according to Environment Canada.

As of Tuesday morning, the city's transit and roadways were still recovering.

The Bloor-Danforth subway line is still not operating between Kipling and Jane stations, after flooding and power outages shut down much of the city's entire subway service Monday. The 504 King streetcar is also diverting due to a flooded underpass at Atlantic Avenue.

Many of GO Transit's trains and buses were delayed and re-routed Tuesday, and commuters are advised to check the GO website for an updated list of disruptions.

The flooding had caused a full closure of the north-sound Don Valley Parkway last evening, but all lanes were re-opened in time for the morning rush hour. Lake Shore Boulevard and the Allen Expressway were also re-opened. Road closures in Toronto that continued into Tuesday morning included Rosedale Valley Road from Bayview to Park Road, and the underpass at King Street and Atlantic Avenue.

Peel Regional Police tweeted a number of intersections where officers are directing traffic Tuesday morning. Dixie Road north of Lakeshore Road East in Mississauga is closed in both directions due to dangerous conditions.

Toronto Pearson tweeted Tuesday morning that its operations may be slower than usual, and that travellers should confirm their flight status before heading to the airport. Porter Airlines had cancelled all Toronto flights Monday after power outages at the airport, but flights appeared to be departing on time again as of Tuesday morning.

By late afternoon, Toronto Hydro reported that there were still 70,000 customers, mostly in the west end, without power. The power outage also meant that subway service west of Jane Station could not be resumed for the afternoon rush hour.

And there are signs of more bad weather to come. Environment Canada has issued a special weather statement regarding a low pressure trough crossing southern Ontario early Wednesday. This may cause possible thunderstorms including torrential downpours, damaging winds, and large hail.

For those cleaning up in the storm's aftermath, the City of Toronto said it will have a special garbage collection on Saturday, July 13 for waste created by flooding. Items must be at the curb by 7 am and crews may take until Monday to collect all items.  City-issued bag tags will not be required for this collection. 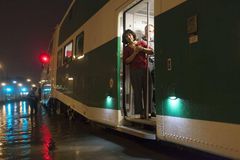