Nearly a year after Canadian diplomats and their families started experiencing unusual health symptoms in Cuba, the federal government says it still has no idea what has caused the reported nosebleeds, dizziness, sleeplessness and headaches.

A senior Canadian government official said 27 diplomats and their family members have undergone medical testing since the unexplained symptoms began in Havana last March; eight people required follow-up care. The official, who spoke to reporters on the condition of anonymity during a briefing in Ottawa Wednesday, said the government has not reached any conclusions about what caused the symptoms, including whether the affected individuals were victims of a sonic attack.

Cuba's ambassador to Canada insists the symptoms were not caused by a sonic weapon. Speaking to The Globe and Mail last month, Julio Garmendia Pena said Cuba is working with Canadian and American authorities to investigate the matter, but that preliminary findings confirm there was no deliberate attack by Cuba or any foreign agents.

"It has been proved that our territory has not been used either by any Cuban citizens or foreign citizens to conduct these attacks. There have not been any attacks."

U.S. officials told Congress on Tuesday that they are investigating a range of possibilities, such as a deliberate viral attack, beyond the initial theory of a sonic weapon. Secretary of State Rex Tillerson convened a high-level investigation into the situation this week.

The senior Canadian government official said that while American and Canadian diplomats have experienced similar symptoms, there are differences between the cases. While many Americans reported injuries after hearing what they described as a high-pitched sound, only one Canadian heard the sound and experienced symptoms afterward. Other Canadian diplomats and their families heard the sound, but didn't get symptoms.

The RCMP is leading the Canadian investigation into the health symptoms, including an environmental assessment of the water and air at the Canadian embassy and residences. However, the Canadian official noted that the government is working in uncharted territory, having never dealt with an incident like this before.

In April, 2017, the U.S. embassy asked Canada if its staff in Havana had heard any strange sounds or experienced any unusual health symptoms. In May, Canadian diplomats and their families came forward with symptoms; 27 people in 10 households were medically tested. The eight individuals, including children, who received follow-up care are either back to work or school, the federal official said. Although one person continues to suffer from headaches, according to the official, no one has been taken to hospital as a result of their symptoms.

Most of the affected individuals experienced their symptoms in May, 2017. The official said two more individuals reported feeling waves of pressure in August and December.

The staffing levels have remained unchanged at the Canadian embassy in Havana, although three diplomatic families have chosen to move back to Canada since the summer. Global Affairs Canada said it has no plans to follow in the footsteps of the United States and withdraw staff from Cuba.

Washington withdrew more than half of its staff from its Cuban embassy last September and warned Americans against visiting the island, citing the health problems suffered by diplomats. Global Affairs said it has no reason to believe Canadian tourists and other visitors could be affected.

Mr. Pena said Cuba is just as puzzled about the health symptoms experienced by diplomats, but remains committed to aiding the ongoing investigation.

"Cuba has always expressed its full, unequivocal willingness to co-operate in the investigation," Mr. Pena said. "Cuba shares the concerns over these health problems shared by Canadian diplomats and their families." 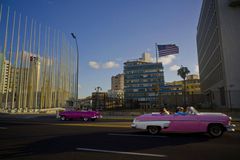