The Chinese state-owned firm seeking the Trudeau government's approval to buy one of Canada's biggest construction companies recently notified its shareholders it will establish a Communist Party of China unit inside its corporate ranks.

While in the past many executives had seen such a measure as symbolic, that is changing under Chinese President Xi Jinping, who seeks to increase the party's influence in China's state-owned companies.

China Communications Construction Co. (CCCC), which wants to acquire Canada's Aecon Group Inc. in a $1.5-billion deal, notified shareholders late last year of the move to give Beijing's ruling party a place in the firm.

In a filing with the Hong Kong Stock Exchange dated Oct. 30, 2017, the Beijing-based construction giant said it is making room inside its corporate structure for a Communist Party section in which the party "organization shall play the core leadership role and core political role, providing direction, managing the overall situation."

A multitude of state-owned enterprises have been adding the Communist Party to their corporate structures in recent months, giving what appears to be a supporting role to the entity that heads China's authoritarian state.

The presence of party units in China-based companies has long been a fact of doing business in the Asian country, where the law requires companies, including foreign firms, to set up a party organization.

Under Mr. Xi, the party has sought to address the "weakening, watering down, hollowing out and marginalization" of party leadership at state enterprises, the party's official People's Daily newspaper wrote last June.

John Beck, chief executive of Aecon Group, played down the addition of a Communist Party unit to CCCC's corporate structure.

"We know that its parent company is publicly traded and its biggest shareholder is a Chinese state owned enterprise [SOE], and that some of the world's leading institutional investors also own shares in the company. These changes are applicable to all SOEs, not just [China Communications Construction]'s parent company, and are not expected to have any impact on Aecon's business," Mr. Beck said in a statement.

Conservative MP Tony Clement said the issue raises questions about who will make corporate decisions at Aecon should the Trudeau government approve the takeover.

"This shows the continuing close relationship between CCCC, the Communist Party of China and Chinese state interests," said Mr. Clement, who once served as federal industry minister and was responsible for vetting foreign takeovers. "It's clear that Canada's national interests will be subordinate to a foreign authoritarian power and its ruling party."

Canada's largest construction companies have been urging the Liberal government to block the Aecon takeover on the grounds that CCCC – which is one of the world's largest infrastructure companies – has a poor track record when it comes to safety and corruption, and that a state-controlled Chinese entity is not suited to work on projects with security concerns, such as the refurbishment of Ontario nuclear power stations and building military facilities.

The session was part of a last-ditch campaign to stop a deal that would make CCCC a significant player in a booming domestic construction market.

Aecon's board of directors put the 140-year-old company up for sale in the summer, in part to find an international partner and compete for larger projects and also in response to pressure from an activist shareholder who wanted to see the stock price rise, and announced a deal with Beijing-based CCCC in October.

Aecon shareholders voted overwhelmingly in favour of the takeover in December.

Many industries are wary of takeovers by state-owned entities, which do not have to focus on profit and can undercut competition and distort the market.

CCCC is 63-per-cent owned by the Chinese government.

National security agencies in Canada and the United States have warned that companies owned or partly owned by the Chinese government are not merely commercial operations; they are also prone to passing on information or technology to Beijing and making business decisions that could conflict with Canadian interests but serve the agenda of the Communist Party. In recent years, the construction company, which has 118,000 employees, helped China assert sovereignty over the disputed South China Sea by building artificial islands, and CCCC was barred until recently from bidding on World Bank projects because of an acquisition's "fraudulent practices."

Innovation Minister Navdeep Bains's office declined to comment on the concerns raised by construction companies concerning the takeover of Aecon.

"We cannot comment on what has or has not been said in the meetings you are referring to," Mr. Bains's office said in a prepared statement. "We welcome foreign investment that will benefit the Canadian economy but not at the expense of national security." 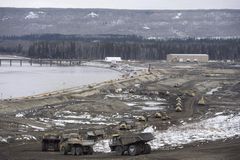