The Coalition Avenir Québec is vowing to shake up the provincial government's senior leadership and to enforce cutbacks in municipal pension plans if its wins the Sept. 4 election.

CAQ Leader François Legault said nothing will stop him in his efforts to cut 4,000 jobs at Hydro-Québec and bring down the $4.5-billion deficit in municipal workers' pension plans.

Mr. Legault said a CAQ government would be flexible on how its goals would be achieved, but that "we won't stray from our targets."

The main measure in the CAQ's arsenal is a legislative change that would provide Quebec municipalities with the right to lock out its employees during the collective bargaining process. The goal would be to "even out the balance of powers" in contract negotiations, Mr. Legault said.

The demand for a right to lock out employees is championed by Quebec City Mayor Régis Labeaume, but Mr. Legault said dozens of other mayors have privately called for the measure. He said that he is willing to negotiate with unions on ways to cut the pension deficit, but said that he would bring in legislation if there is no quick progress on the file.

Mr. Legault said 65 per cent of Quebeckers don't have pension funds, and that it would be unfair to call upon them to dig into their own pockets to fund the deficit.

"It's not true that we will solve the problem by forking over the responsibility into the laps of taxpayers or the next generation," he said. "That's non-negotiable."

Mr. Legault added that he will expect senior government officials, such as the head of Hydro-Québec, Thierry Vandal, to buy into his plan if he forms the next government.

"If the president of Hydro-Québec convinces me that he is willing to lower spending by $600-million, I'd be open. But what I have seen so far is the exact opposite," Mr. Legault said.

Liberal Leader Jean Charest, who first came to the premier's office in 2003 with his own plans to trim red tape and fat, eventually watered them down in the face of  protests, particularly by unions. Mr. Charest noted some top-level executives in Crown agencies were replaced, but others who were named by the previous PQ government were kept.

"I'm concerned that he's sending a very disruptive message," Mr. Charest said. "It's normal when there's a change of government changes will happen in the public service. The government will work with people who have shared agendas. A purge is different."

"You don't start out from the premise of starting fights and firing everybody. If he installs this culture of quarrel in the government, it will serve no one."

For Parti Québécois Leader Pauline Marois, the CAQ was no different than the Liberals, with Mr. Legault proposing policies that would create confrontations similar to those created by Mr. Charest .

"It seems to me we  have had enough of this in the last few years," Ms. Marois said, adding that Mr. Charest's desire for less government and controversial reforms to labour laws sparked a backlash from unions in the first years in power. "It was a catastrophe. It even led to Mr. Charest forming a minority government in 2007," she said.

The PQ leader argued that Mr. Legault's polices would produce the same result and serve only one purpose: to create social tensions in Quebec.

With a report from Les Perreaux and Rheal Seguin 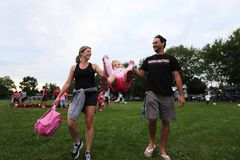 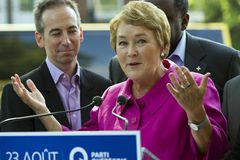 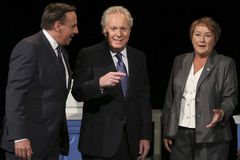