The federal government is no longer committing to an open tendering process to buy new fighter jets, with Prime Minister Justin Trudeau deriding the stealth Lockheed-Martin F-35 as "a plane that doesn't work."

Mr. Trudeau's comment reinforced the sense that the government is moving away from its commitment – repeated frequently since last November – to hold an "open and transparent" competition to replace the three-decade-old CF-18s.

Federal officials cautioned that no decision has been made, pointing out that options have yet to be placed in front of the cabinet, where the matter will ultimately be decided.

Still, Defence Minister Harjit Sajjan was twice asked on Tuesday whether he would pursue an "open" competition, and twice responded about the urgent need to replace the CF-18s to meet Canada's duties with the North Atlantic Treaty Organization and the North American Aerospace Defence Command.

"We are looking at a gap that we have to deal with. These jets should have been replaced a long time ago," Mr. Sajjan told reporters. "I am looking through all of the information right now. One thing is for sure, I want to make sure that we buy the right type of airplane for our men and women."

The issue is putting the Liberals in a tight spot, with the Conservatives accusing the government of rigging the system to fulfill the Liberal Party's campaign pledge not to buy F-35s. At the same time, the NDP is attacking the government for moving away from its promise to hold a fair competition.

During Question Period, Mr. Trudeau accused the previous Conservative government of having "botched their procurement process."

"They held on to an aircraft that doesn't work and that is a long way away from working," the Prime Minister said in a clear reference to the F-35. "They left us a mess that we are going to fix, because that is why Canadians elected us."

A Liberal official, speaking on condition of anonymity, raised questions about the need for a full tendering process at this point, arguing that aircraft manufacturers have already provided much information on their fighter jets to the government.

In his past public comments on fighter jets, Mr. Sajjan repeatedly spoke about the need to go to tenders to make the acquisition.

"We will open it up to an open process," he told reporters during a conference call last December.

Last February, speaking to the Conference of Defence Associations Institute, he said the competition to replace the CF-18s "will be open."

However, Mr. Sajjan has made the point in recent weeks that the Canadian Forces are increasingly struggling to meet their international commitments, including the protection of North American airspace alongside U.S. forces.

"Our fleet of CF-18s need to be replaced now. And the fact they have not been replaced means we are facing a capability gap in the years ahead," he said in a speech on May 26.

The Conservatives are raising fears the Liberal government is working behind the scenes to create a process that would favour the untendered purchase of Super Hornets at the expense of the F-35.

During Question Period, Conservative MP James Bezan said there is no rush to buy new aircraft, stating that the CF-18s have been refurbished to fly for nearly another decade.

"The Liberals have invented an imaginary capability gap," Mr. Bezan said, accusing the government of building "a false narrative to sole-source the Super Hornet."

"The Liberals have broken their promise for a fair and transparent competition to replace our CF-18s," he added.

Mr. Sajjan responded that the issue should have been resolved years ago. "Our men and women deserve the right equipment, and our government will deliver on that," he said. 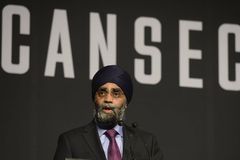 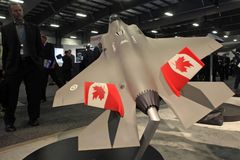 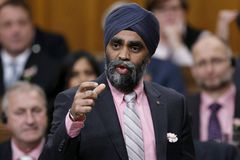