In return, the former president spoke emotionally about his long relationship with Canada, including his friendships with Pierre Trudeau and Joe Clark, and the so-called Canadian Caper in which six American diplomats were hidden and then spirited out of Iran by Canadians. He also related the little-known tale of his role in the 1952 Chalk River, Ont., nuclear-reactor meltdown, which echoes even today.

It certainly echoes for Mr. Milnes, a 44-year-old Kingston resident and fellow in political history at Queen's University. He is fascinated with former Canadian and American leaders, dead or alive, and to feed that he edits books of famous leaders' speeches, including those of John Turner, Franklin Roosevelt and R.B. Bennett. To fund them, he scrambles around for donations.

His latest book, Jimmy and Rosalynn Carter; A Canadian Tribute, is the sixth in his series. (Four former prime ministers donated funds to help him pay for it; Liberal MP Bob Rae led a celebrity walking tour of Sir John A. Macdonald's haunts in Kingston, the proceeds of which went to the book funding.)

This is why Mr. Milnes and his group - which includes permanent members Steve Paikin, the TVO host and moderator of the federal party leaders' English-language debate during the recent election campaign, and David Lockhart, the former Paul Martin speechwriter - found themselves with about 100 other Canadians at the farm in Georgia where Mr. Carter grew up.

And this is how the 86-year-old former president, who was presented with his new book, came to reminisce about Canada and his trip to Chalk River so many years ago.

"All of us lately have been watching with a great deal of concern and despair the meltdown of the nuclear reactors in Japan," Mr. Carter noted. "The same thing happened in Canada."

He described how as a young naval officer, he worked on the secret nuclear program. He was part of a team dispatched to Chalk River to help dismantle the "very highly radioactive core" of the reactor after its partial meltdown.

An exact model of the reactor was set up on a tennis court, he recalled. And the team members, dressed in their protective suits and armed with wrenches and vice-grips, had only 90 seconds to rush in and "take off as many nuts and bolts as we could …"

Practice soon made perfect - and they were ready to work on the real thing.

"Then we went down below into the reactor room," recalled Mr. Carter. "We dashed on the site there and, in a highly radioactive environment, did our job. I had radioactive urine for six months and I thought I would never have another child but Amy came later."

Several decades later, the tables turned - and Mr. Carter, who had helped Canada, would be helped by Canada. He spoke, at times emotionally, about the events in 1980 when Canadian diplomats in Iran rescued six American hostages. The hostages were hidden in the Canadian embassy in Tehran for weeks.

"Eventually, at the right moment, I agreed and the Canadian prime minister agreed, that they should be evacuated from Iran pretending not to be related to the United States at all," Mr. Carter recalled.

The six were spirited out of Iran on Canadian passports, issued specially for the purpose.

"I think you all will remember, those of you who are old enough, how the closeness of this event affected every citizen in the Northern Hemisphere when, without having to do so, the entire Canadian embassy staff - and your government right up to the prime minister - put themselves in political and sometimes physical danger to rescue six of my American friends," Mr. Carter noted, his voice catching.

Then there are his Canadian friends. Joe Clark, who was prime minister at the time of the hostage incident, remains in touch. Mr. Clark wrote the preface to the Carter book.

Pierre Trudeau was a friend, too. And Mr. Carter remembered with some mirth how in 1996 they ran into each other in Niagara Falls.

"Pierre Trudeau happened to be there at the same time with a little girl about three years old," he recalled. "I made the mistake of saying, 'What a beautiful granddaughter.' In a very nice way he told me she was not a granddaughter but his daughter."

He was referring to Sarah Coyne, who is now 20, and the former prime minister's daughter from his relationship with Deborah Coyne, whom he had met during the constitutional battles in the early 1990s.

For Arthur Milnes, meanwhile, this was his eighth visit to Plains; the Carters fondly refer to him as the "Plains Canadian Tourism Rep." Not one to relax, Mr. Milnes is thinking about what's next - Robert Borden's and John Diefenbaker's words are calling to him now. 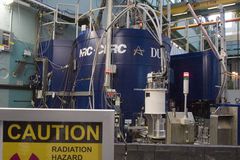 OECD nuclear chief hopes Ottawa will be 'flexible' on medical isotopes
February 24, 2011
Follow Jane Taber on Twitter @janetaber1
Report an error Editorial code of conduct
Due to technical reasons, we have temporarily removed commenting from our articles. We hope to have this fixed soon. Thank you for your patience. If you are looking to give feedback on our new site, please send it along to feedback@globeandmail.com. If you want to write a letter to the editor, please forward to letters@globeandmail.com.
Comments