Ottawa will have to launch a series of negotiations as soon as it tables its long-awaited bill to legalize marijuana on Thursday, needing to strike deals with the Senate, the provinces and the U.S. government in its bid to lift the 94-year-old prohibition on the drug.

For starters, the Liberals will need to adopt a raft of legislative changes in the House of Commons, where they have a solid majority, but also through an independent Senate that is increasingly asserting its desire to study and amend government bills.

The legislation that is scheduled to be tabled shortly after noon on Thursday is being shepherded by the departments of Health, Justice and Public Safety. The three federal agencies are in charge of creating a system in which marijuana is grown by federally licensed producers and sold across Canada in stores that are overseen by the provinces. The legislation will also severely punish whoever sells cannabis to people under the legal age or outside of the legalized regime.

Still, the proposed legislation is expected to leave a number of unanswered questions, as the government will be adopting regulations at a later date to provide its full plan to deal with issues such as cracking down on drug-impaired drivers.

Conservative Senator Claude Carignan, who has pushed for a roadside-testing system to deal with an expected increase of drug-impaired drivers, said there is no guarantee the legislation will be adopted before the government's self-imposed deadline of July 1, 2018.

"If the government doesn't propose a comprehensive solution, to ensure the safety of the public and crack down on drug-impaired driving, obviously, there will be obstacles in the Senate," he said in an interview.

Ottawa will also need to work out a system with the provinces by which marijuana will be sold to the adult public. There have already been high-level discussions between the two levels of government, but there are still issues to resolve such as taxation of the product and education campaigns on the dangers of marijuana, especially among youth.

There is no guarantee all provinces will be ready to oversee the distribution and the sale of marijuana by the time the product becomes legal. As a result, federal officials are preparing an "interim system" that would distribute marijuana across the country if the provincial infrastructure is not yet in place by the middle of next year.

Quebec has struck a cabinet committee to co-ordinate planning for legalization. It met for the first time on Thursday but the government said it was largely in the dark about the federal legislation's impacts on the provinces.

"There are risks involved in this if it's not done properly in a co-ordinated fashion with the provinces," Quebec Premier Philippe Couillard told reporters in Quebec City. "There are large burdens that could fall to the provinces when it comes to regulation and building a framework around this issue. This must not be implemented in a chaotic fashion. We need the change to be orderly and coherent with our neighbours."

The Quebec government is set to join forces with Ontario to examine the federal legislation and find solutions to the host of problems it may present for the provinces.

"We will have common challenges on issues like health and prevention and security, especially when it comes to road and workplace safety," Quebec Public Health Minister Lucie Charbonneau said.

The federal government is also concerned about the U.S. reaction to the legalization of cannabis in Canada. A senior federal official said there will have to be negotiations with the U.S. government to determine how Canadian citizens will be treated at the border if they admit to consuming a product that is legal in Canada but not in a majority of American states.

Justin Trudeau was a newly elected Liberal Leader when he promised to legalize marijuana for recreational use in the summer of 2013. Speaking at a rally in Kelowna, B.C., he noticed someone holding a sign that called for the decriminalization of cannabis. Mr. Trudeau announced that in fact, he wanted to go one step further.

Now Prime Minister, Mr. Trudeau is stating that his plan will make marijuana harder to obtain for kids and remove the market from the grips of organized crime. 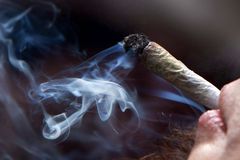 analysis
Liberals to weed out positive spin to marijuana branding
April 12, 2017
B.C. eagerly anticipating federal bill legalizing marijuana
April 12, 2017
Follow Daniel Leblanc on Twitter @danlebla
Report an error Editorial code of conduct
Due to technical reasons, we have temporarily removed commenting from our articles. We hope to have this fixed soon. Thank you for your patience. If you are looking to give feedback on our new site, please send it along to feedback@globeandmail.com. If you want to write a letter to the editor, please forward to letters@globeandmail.com.
Comments