Good morning. We begin today with a report from Laura Stone, who is at the Liberal caucus retreat in Kelowna, B.C.:

Prime Minister Justin Trudeau is facing a new foe in his government's pledge to reform the tax system: female doctors.

The Canadian Medical Association claims the Liberals' proposed tax changes – which include restricting the use of income sprinkling to family members and passive investments – will disproportionately impact women, who use the measures to save for maternity leave and other financial planning initiatives.

At a packed town hall at the University of British Columbia's Okanagan campus last night, Mr. Trudeau took questions on everything from electoral reform to gay rights to Canada's relationship with indigenous peoples. But the most timely exchange, as Liberals vigorously debate the issue of tax fairness, came from a female physician in Kelowna who said the Liberal government was creating "two classes" of Canadians with its tax-change proposal: employees with benefits and pensions, and small business owners without.

Dr. Anita Sanan told the Prime Minister she went to school for 14 years and accrued a six-figure debt load.

"You move the goal posts in the middle of the game and expect me somehow to be able to plan for my retirement, plan for maternity leave – which I will not be able to afford at this time – and I'm having to choose between having a family and being able to actually practise as a physician," she said.

In response, Mr. Trudeau said he's fairly certain that there is maternity leave for doctors in every province. "That is incorrect," Dr. Sanan replied. A man from the audience yelled, "That's a lie!"

"I said I was fairly certain and I'm happy to be corrected," Mr. Trudeau said.

(In fact, British Columbia does appear to have some form of parental leave benefits for doctors.)

Mr. Trudeau said Canada currently has a tax system that's created a "double-structure system," where people who can afford to incorporate for tax purposes have access to measures that others do not.

"We have a system that treats people differently whether or not they are making a certain amount of money," Mr. Trudeau said.

"The issue is that that's not entirely fair, that people that have access to higher income brackets get to opt out of certain portions of the Income Tax Act."

He told Dr. Sanan the government is not saying she – or any other incorporated professionals – has done anything wrong. "There is no suggestion you haven't been following the rules. There is a suggestion that perhaps the rules which benefit the wealthy deserve a little tweaking, and that's exactly what we're doing."

Mr. Trudeau added that the government does not want to disadvantage anyone with their proposal.  "Our goal is to make sure the wealthiest Canadians pay a little more so we can give better services, better opportunities, and more help to the folks who really need it."

And with that, the Prime Minister moved on to another topic. But he'll likely face similar questions from reporters today, at an afternoon press conference marking the end of the two-day Liberal caucus retreat.

This is the daily Politics Briefing newsletter, written by Chris Hannay in Ottawa and James Keller in Vancouver. If you're reading this on the web or someone forwarded this email newsletter to you, you can sign up for Politics Briefing and all Globe newsletters here. Have any feedback? Let us know what you think.

The Politics Briefing newsletter is two years old! We would love to hear your feedback about what works and what doesn't. Drop us a line and let us know what you think.

Russian President Vladimir Putin says he doesn't think the current tensions with North Korea will escalate to a nuclear war. "All the competing sides have enough common sense and understanding of their responsibility. We can solve this problem through diplomatic means," he said at an economic forum in Russia this morning.

Myanmar leader Aung San Suu Kyi, a Nobel Peace Prize laureate and one of the few honorary Canadian citizens, is being blamed by the Canadian government for not stopping the violent persecution of Rohingya Muslims in her country.

What once was one bridge between Windsor and Detroit could soon be two. The Canadian government, which is already working on building a bridge between the two cities along this important trade corridor, is backing a second bridge proposed by a private corporation.

Environmentalists and Inuit groups say they are not being properly consulted on changes the Liberal government are making to offshore drilling rules in the North.

B.C. First Nations are looking at the province's new NDP government as an opportunity for change. Some First Nations had a strained history with the previous Liberal government, whose efforts to build a "new relationship" with Indigenous communities were overshadowed by conflict over resource projects. The New Democrats have promised to address that, notably by implementing the principles of the United Nations Declaration on the Rights of Indigenous People, or UNDRIP. Ed John, grand chief of the First Nations Summit, says the commitment to UNDRIP and to the Truth and Reconciliation Commission's 94 calls to action are encouraging. He says the actions of the Trudeau government in Ottawa and the Horgan government in B.C. mean the "stars" have aligned for meaningful change.

Add a major bridge across the Fraser River to the projects B.C.'s NDP government is now reviewing after taking power. The New Democrats campaigned to oppose or at least question several major projects, including pipelines, the Site C hydroelectric dam, and a bridge to replace the George Massey tunnel under the Fraser. The bridge, announced by the previous Liberal government, would be a 10-lane span costing $3.5-billion. The New Democrats have always been skeptical, and now the government has launched a technical review to determine if there are any other solutions.

Saskatchewan Premier Brad Wall, who is set to step down in the coming months, says he has been extensively interviewed by the RCMP about a government land purchase that has raised concerns.

And an incredible story has emerged of how an 18-year-old university student led the push to create the National Holocaust Monument in Ottawa. The structure will be officially unveiled by Prime Minister Justin Trudeau later this month.

Globe and Mail editorial board on NAFTA negotiations: "It is impossible to do business in many parts of this country without properly consulting Indigenous peoples. It's Canadian law, NAFTA or no. But demanding that the U.S. and Mexico rewrite their laws on this score is a non-starter, and is almost assuredly something Canada would abandon if doing so put a trade deal at risk."

Senator Ratna Omidvar, in The Globe and Mail, on immigration: "The White House officially announced its phase-out of the Deferred Action for Childhood Arrivals, or DACA, program over the next two years. Work permits for 800,000 undocumented young people will no longer be renewed and their protection from deportation could be stripped in six months. It is likely that some will turn their attention to Canada. Canada's response cannot be naively idealistic, nor should it be fuelled by cynicism. We cannot welcome each and every one of these so-called DREAMers, but at the same time we shouldn't refuse their entry into Canada altogether."

Lloyd Axworthy and Allan Rock, former Liberal cabinet ministers, in The Globe and Mail on Myanmar: "What does that mean for Canada in concrete terms? It means forming a coalition of like-minded states drawn from all the world's regions to demand that Ms. Suu Kyi end the Myanmar military's rampage. It means calling for accountability for those in Myanmar who have committed crimes against humanity. It means mobilizing global public opinion to put pressure on the UN Security Council, where China and Russia are already standing in the way of any sensible discussion, to take measures that will end the violence."

Andrew Coyne (National Post) on the Liberal tax changes: "There are lots of valid critiques of Finance Minister Bill Morneau's proposals. But these have been lost in a cross-country meltdown among doctors and small business owners out of all proportion to any increase in tax they might suffer."

Colin Horgan (CBC) on the Liberal tax changes: "What it all means is that the coming rhetorical showdown in Parliament over tax reform for a small number Canadians who are very wealthy, or only more wealthy than most, will exist because they – and the organizations that represent them – have the money to make it one. Morneau may have been talking about taxes when he mentioned a societal income divide, but the fact that he has had to discuss this issue at length already shows how, when it comes to special interests, one already exists." 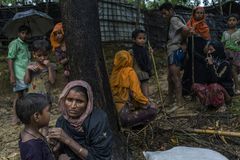 Follow Chris Hannay,  on Twitter @channay
Report an error Editorial code of conduct
Due to technical reasons, we have temporarily removed commenting from our articles. We hope to have this fixed soon. Thank you for your patience. If you are looking to give feedback on our new site, please send it along to feedback@globeandmail.com. If you want to write a letter to the editor, please forward to letters@globeandmail.com.
Comments