When Parliamentarians rise in June for their annual summer break, they will leave Centre Block behind for a decade. Here are a few of the secrets that make Centre Block one of Canada's oddest buildings.

An apartment for the Speaker

Not many occupations have perks like a driver, a country house, a pay raise and the chance to sleep on the job – sort of.

Geoff Regan is a second-generation member of Parliament – he and his father, Gerald, have represented parts of Halifax – and he says he remembers his dad would tell him when he was growing up that the Speaker was the only person allowed to sleep in the House of Commons.

Mr. Regan said he did not realize what that meant until he was elected to the role in 2015.

"I never imagined in the hundreds of times I came through that door, what was behind this door," Mr. Regan said in a Centre Block corridor, pointing from an MPs' entrance for the House of Commons to a nondescript office entrance across the hall.

Inside is the Speaker's apartment – a three-room suite with a living room, bathroom and, yes, a bed. (The Speaker also has a dining room down the hall to entertain guests.)

Mr. Regan said he does not use the bed much because of what happened the first time he tried.

One night in May, 2016, an emergency debate stretched on until midnight. Mr. Regan stayed until the end, then walked across the hall and went to bed. He says he woke just a couple of hours later to the sound of a masonry saw.

"So picture me at about 3 o'clock, walking in my bare feet and pyjamas, down to the guards' desk under the Peace Tower, to say: 'Guys! Can you do something about this noise! I gotta get some sleep!' " he said.

Mr. Regan said he later found out the noise was caused by, of course, restoration work.

Just as our country's laws are often changed, so, too, is the space in which they are rewritten. John A. Pearson, the architect who led the redesign of Centre Block after it was destroyed in a fire a century ago, intentionally left parts of the building blank for future generations to fill in.

Johanna Mizgala, the curator of the House of Commons, says about 200 elements of the building – such as blank walls or windows – are still unadorned.

"[Parliament] is a living, changing institution that must always be keenly aware of its past while always striving for a better future," Ms. Mizgala said.

One recent addition was the stained-glass piece Giniigaaniimenaaning (Looking Ahead), by artist Christi Belcourt. It was installed in a window above the west door of Centre Block in 2012 to commemorate the government's apology to Indigenous survivors of residential schools.

Not all the art in the building has meaning. Small busts and gargoyles festoon the inside and outside of Centre Block, and a quartet in the Senate foyer is said to be self-portraits of four sculptors who worked on the reconstruction of the building, and who were left under-supervised.

Some secrets are right in the walls. In the Opposition Leader's Office on the fourth floor, a hidden door blends into the wood panelling. It covers a short passageway between the leader's room and one for his staff.

The door and most of the office's decorations – paintings of knights and carvings of "local" fruit including, oddly, pineapples – are attributed to Mackenzie King, who was one of the space's first occupants. The passage is short in length but also in height. King could easily use the escape route to sneak out of his office and avoid unwelcome visitors – but he was quite a bit shorter than the current occupant, Andrew Scheer, who is more than six feet tall and has to duck.

When Prime Minister Justin Trudeau moves to West Block later this year, he will get a secret passage of his own. The office he inherits was first used by Alexander Mackenzie, Canada's second prime minister, who had a secret staircase installed so – like King – he could slip out and avoid unwanted guests.

In the centre of the Library of Parliament – one of the most beautiful rooms in Ottawa – is a white marble statue of Queen Victoria from 1871. And underneath that statue is a metal rod, driven straight down into the bedrock.

"[The rod] is intended to ensure that this heritage artifact is protected against any seismic activity that might occur, and that our staff, who work below and around the statue, are protected," a spokesperson for the library said in an e-mail.

The whole library, in fact, extends underground. In the second basement is the rare books section, a special climate-controlled space with pieces such as a leaf from the Gutenberg Bible and 1752 copies of the Halifax Gazette, Canada's first newspaper.

Pursuits below the House of Commons were less scholarly when it was first built: A pub was there. "The bar in the House of Commons is in every respect a public bar and not confined to the use of members," a Globe reporter wrote in 1881, suggesting that if alcohol was not so near at hand "the brawls and scenes which have disgraced not only this but previous Parliaments would never have been witnessed." (It closed years later.)

But it is still possible to get a drink in the building. A little further down, in a corner of the basement not far from where Peace Tower flags are stored, is a machine that dispenses Coca Cola. Public Services and Procurement Canada says the vending machine was purchased in the 1960s and replaced in the 1980s – but don't call it old. "The machine does dispense glass bottles, but is not considered vintage," a department spokesperson said. Thankfully, the soda is refilled regularly.

Editor’s note: The Library of Parliament earlier said the third basement is the rare books section. In fact, it is the second basement. This version has been corrected.

Restoration, modernization of Parliament Hill buildings will give them an extraordinary second life
February 13, 2018 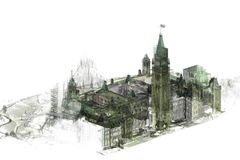