What do you get when you bring old and new buildings together? Sometimes you get a lively conversation between different eras.

But sometimes you get a collision. That's the case with downtown Toronto's newest office tower at 100 Adelaide St. West: a well-made and handsome modernist skyscraper, combined with the half-hearted rebuild of a 1928 art-deco tower. Neither comes out unscathed.

It's a shame, because the new building – dubbed EY Tower for its main tenant, the big accounting firm – would be perfectly good on its own. It was designed for Oxford Properties by Josh Chaiken of the New York architects KPF, together with Toronto firm WZMH, and its blue-glass curtain wall is beautifully articulated, if generic.

Mr. Chaiken's design begins as a rectangular form, which leans in and tapers to a point at the top; it also pushes outward at two corners into little prows that poke toward the street. At the base, a layer of glass extends from the tower above an adjacent plaza. "That little scoop folds out and makes a gesture to pedestrians," Mr. Chaiken explains. This is one of "a few places," the architect says, "that we chose to add some architectural expression to give the building some personality."

Otherwise the tower is personality-free: well-lit and basically the same from floor to floor. The building is designed to achieve a Platinum mark under the LEED sustainability-rating system, and it incorporates zoned climate-control systems, with dual ventilation systems for temperature and fresh-air supply. Landlords such as Oxford and their tenants are conscious of their energy use and what it costs. A LEED Gold standard, says Oxford vice-president Mark Cote, "is table stakes for a building like this today."

On the other hand, the developers wanted the project "to differentiate itself in the marketplace from both a design and quality perspective," Mr. Cote says. "How you integrate the heritage and the new tower is not easy; it's been a tricky exercise."

Tricky and – though the developers naturally disagree – unsuccessful. "The heritage" is the Concourse Building, an office building completed in 1928 by the architects Baldwin & Greene. The design force was Martin Baldwin, who would become the first director of the Art Gallery of Toronto in 1948; in the twenties, he pioneered the art-deco style in Toronto. At the Concourse that meant sleek geometric ornament gesturing upward to the sky, as well as murals and mosaics that depict an array of Canadian wildlife and vegetation. These were created by the Group of Seven member J.E.H. MacDonald and his son, Thoreau MacDonald.

And those works of decorative art are still there. They've been reconstructed, under the direction of heritage architects Goldsmith Borgal: The mosaic over the Concourse's doorway is back in place, carefully restored. Inside, two decorative panels are on display in glass cases, within what Mr. Chaiken calls a "lobby-slash-gallery space" that's faced in pale limestone. But the old building has none of its guts; the south and east façades of the building have been stuck onto the new tower, carefully reproportioned from 16 storeys to 13 in order to match today's taller ceilings.

To its credit, the new building steps back in deference to the old, and the workmanship on the rebuilt façades is commendable.

But there's nothing much to cheer for in this. The local architect Robert Allsopp has coined the term "urban taxidermy" for this approach. The term applies here in grotesque form: This is the skin of a deer, stretched to the size of a moose and sewn onto a giraffe.

In a sense, it's hard to fault Oxford. The architect Cass Gilbert once defined the skyscraper as "a machine to make the ground pay," and the Concourse building was a small and creaky machine. You don't need to hire EY to figure out that a new 40-storey one trumps an old 16-storey one.

The real question is why the city let the developers do it. In the first place, the city welcomed the new development and had little leverage. When Oxford brought forward its proposal to wreck the Concourse in 2000, the Ontario Heritage Act only permitted the city to delay – and not to stop – that process. The Act was amended in 2005, giving the city more pull. But this deal was already done.

Would it happen again today? That's unclear. In 2000, a new office tower seemed like a huge victory; today the city can afford to look hard at a gift such as this.

And tough questions were in order. To hear Oxford tell it, the Concourse was impossible to retain. Its floors were simply too small, its guts not capacious enough to retain all the ducts and wires that a current Class-A office space requires. So down it went.

But that's bunk. Oxford controls almost the entire block. The company has rationalized the servicing and connections to the all-important subterranean PATH system. (Bay Streeters love their underground lairs.) The "tenant experience," as Mr. Cote explained to me, is seamless. If there's ever a case where a developer could afford to retain a relic – call it a boutique building – it's here.

Happily, planners negotiated other wins for heritage within the complex. The modernist office building at 111 Richmond St. West has been revamped to reveal the design intent of the important architect Peter Dickinson. And the adjacent Federal Building, completed in 1923, will soon get spruced up. In the end Oxford – which is moving into the centre – will have the seamless showpiece of a development it is looking for, with some hints of variety.

But the imperative toward sameness won't go away.

Now that the Concourse has been engulfed, Oxford is turning its attention to the towers it owns next door. These are period pieces of the sixties, wrapped in black aluminum and pierced by square stainless-steel columns. The original architects, WZMH, are now working on giving these old-timers a facelift: Now they'll be wrapped in blue glass. Soon half the block will look much the same; seamless and also soulless. 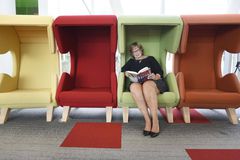