Toronto's airport train is a bit like that old beer slogan – those who like it, like it a lot. The problem is, there are not very many of them.

On one Saturday this month, only 1,144 people rode the new rail link between downtown and Pearson International Airport, an average of barely seven passengers per train. It was the worst day yet for a service that has become a lightning rod for criticism.

Officials defend sagging ridership figures, arguing they are on track and that it takes time to build a customer base for a new service. But they acknowledged they are in a tough spot – negative publicity could spur a notion that the line is a failure, which could deter future passengers and turn into a self-fulfilling prophecy.

The long-term average was boosted by keen interest during the train's early days, and recent numbers are coming in lower. Ridership topped an average of 2,300 per day – barely – in only one of the past four weeks for which numbers are available.

The same report made the claim that overall ridership went up from June to August, not giving the actual totals and not mentioning the fact that the latter month had an extra six days of service. In true terms, separate figures show ridership in August was 17-per-cent lower than in June. In the first two weeks of September, ridership dropped nearly 4 per cent more.

The slow start, which launched in June, is provoking new questions about the ability of Metrolinx to deliver transit projects in an area starved for them. Amid the bad news, critics who have long argued that the premium-priced and spacious train should be converted into a cheaper mass-transit option are circling.

"Even if there were a lot of riders on it, we would still say, 'Why are you building a train that, at its best, is going to fit as many people as the Queen streetcar,'" said Jessica Bell, executive director of the advocacy group TTCriders.

Metrolinx hopes to build demand gradually by making it easier for customers to find the service, via increased marketing, tapping more into the local conference trade and benefiting from the word of mouth of customers, which surveys show are very happy with the service.

The train's fare is $27.50 each way for those without a Presto fare card and $19 with one. There are also various discounts for students, seniors, families and for those making quick round trips. According to officials with Metrolinx, most riders pay the full freight. But they say cost is not limiting ridership.

The agency is also busy signing deals with corporations and governments, allowing their staff to ride for the Presto rate without having to buy a card. This raises the prospect of provincial officials riding the train at lower cost than the citizens who paid for it. But Metrolinx spokeswoman Anne Marie Aikins noted that anyone could ride for the lower rate by buying a card for $6.

"There is absolutely no reason, if you live in Toronto, that you should be paying anything more than $19," she said.

According to Metrolinx, a slow start was expected – in part because the shifting launch date made it hard to ramp up anticipation. It says early fluctuation is normal, maintaining that it's are on track to hit a target of 5,000 riders a day by next summer.

"If we're still sitting here a year from now at the same numbers, my answer's going to be different," said Ms. Aikins. "We're feeling confident that we won't be, that we'll be at our target."

In rough terms, the service needs about 7,000 riders a day to break even on operating costs, a figure the agency aims to reach within three to five years.

Transit activist and blogger Steve Munro said, "It's too early to make a definitive conclusion" on whether the line is a success or failure. But he added that Metrolinx, which inherited this project, could see its credibility undermined if it can't make it work. "It's the test of, 'Can Metrolinx deliver a project?'" he said. 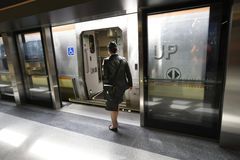