Supporters of the chief planner see her as a breath of fresh air. Critics see an out-of-control ego. John Tory feels a thorn in his side. Ann Hui examines how the Gardiner debate exposed the rift between the city’s ‘star bureaucrat’ and the mayor 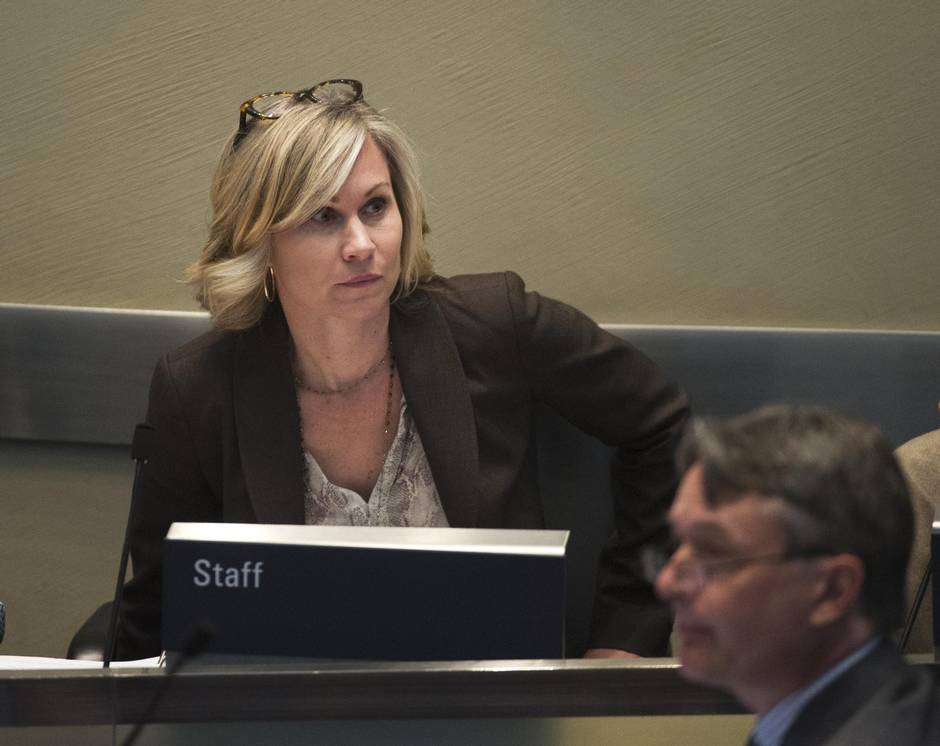 About a week before that meeting, Ms. Keesmaat, the “star bureaucrat” hired by the city just three years ago to much fanfare, had come out publicly in favour of removing the eastern portion of the Gardiner Expressway – placing herself directly at odds with the mayor and his “hybrid” preference. In the days since, she had tweeted frequently in favour of her position.

But her last tweet on the issue came at 7:37 on June 1, just hours before meeting with the mayor.

Since then, her Twitter feed has been silent on the subject of the Gardiner.

Exactly what was said in that meeting – also attended by acting city manager John Livey (her supervisor) and staffers in the mayor’s office – is unknown. Ms. Keesmaat has refused to comment publicly on the matter. Sources with knowledge of the meeting said she was not specifically told to refrain from speaking about the Gardiner.

Still, the sources said, it was made clear to Ms. Keesmaat in the meeting that the mayor found it inappropriate for her to debate him publicly.

Since then, the normally high-profile and media-friendly bureaucrat has not made public comments on the Gardiner outside of the council chamber. She has also turned down repeated requests for interviews.

The incident underscores a growing tension between the mayor’s office and Ms. Keesmaat – a rift that has, in past weeks, divided councillors and led to widespread speculation over her future at City Hall.

The rift also highlights the tenuous support for Mr. Tory’s position on the Gardiner – which squeaked by in council by a three-vote margin, a defining moment in his young mayoralty – and the pressure bureaucrats felt in stick-handling the politically sensitive issue. 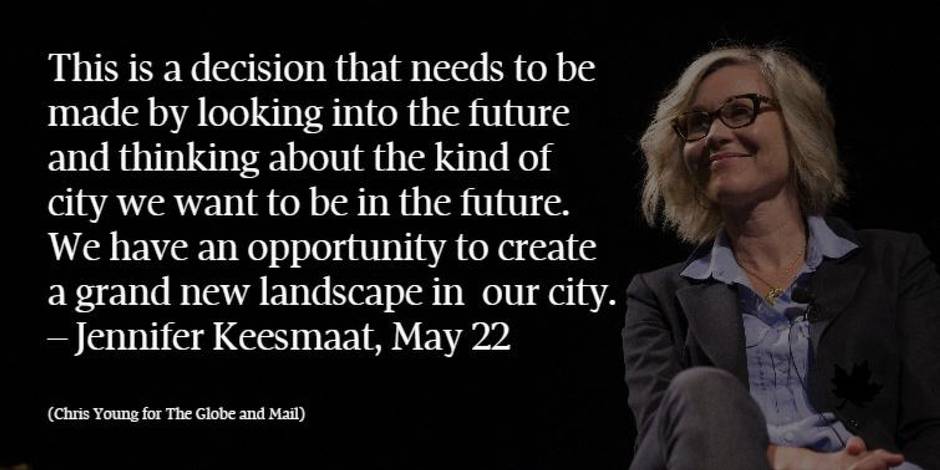 Since her hiring in 2012, Ms. Keesmaat has been a divisive figure at City Hall. Her advocacy for bike lanes and transit put her at odds with the previous mayor, Rob Ford, too. Under the city’s administrative structure, Ms. Keesmaat reports not to the mayor, but to the deputy city manager, who then reports to the city manager.

Councillors who support her speak of her as a tireless champion for transit, cycling infrastructure and mixed-use communities. At just 45 years old, she is the city’s first-ever female chief planner and has made significant strides to raise the profile of the planning department through her countless public appearances.

But her council critics question her outspoken views and whether she crosses the line between advocating and politicking. Those councillors point to Ms. Keesmaat’s social-media activity, including a 2012 tweet calling councillors’ speeches “insufferable,” and tweeting directly at Prime Minister Stephen Harper to advocate for transit.

Ms. Keesmaat declined to speak with The Globe, except to say that she feels she has not crossed any lines on the Gardiner.

“My role is to provide a professional recommendation based on due diligence and analysis. I’ve done that,” she said earlier this week.

“Council is now making a decision. Once that decision is made, I will implement that decision and ensure the maximum amount of public benefit – no matter what the decision is that city council makes. That’s my obligation.”

Still, councillors question whether she goes too far.

“City employees are supposed to be politically neutral and provide their recommendations either to committees or to the mayor, and then the elected officials decide on which course to take,” Councillor James Pasternak said. “To take to the air waves and trumpet your own personal beliefs when you’re serving a city council and serving a mayor, for many around here, that’s going too far.” 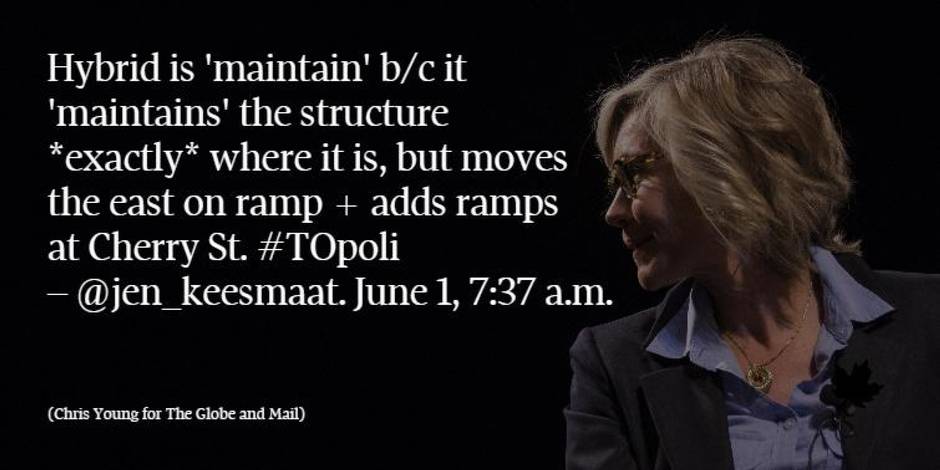 Nick Kouvalis, the mayor’s former campaign mastermind, even floated the accusation this week that Ms. Keesmaat has plans to run for office herself, in a string of tweets attacking the planner.

Though Ms. Keesmaat has a husband who once ran for city council and spent time herself more than a decade ago working as an assistant to Councillor Joe Mihevc, the councillor said she has no political ambitions. A senior Liberal source said the party approached Ms. Keesmaat about six months ago about running for a federal nomination, but that she declined the offer.

“She has told me several times she has no interest in politics,” Mr. Mihevc said. “She loves being planner and feels that’s where her talents are best utilized.”

Councillor Shelley Carroll favourably compared Ms. Keesmaat to the American-style star bureaucrats such as former New York transportation commissioner Janette Sadik-Khan. “She does have to have a position on something like this,” she said. “The community expects that of the person, in the same way they expect an opinion from Mayor Tory. I wouldn’t want to stifle that, ever.”

Councillor Michael Thompson, meanwhile, said he didn’t see anything wrong in Ms. Keesmaat’s public comments. “We shouldn’t attempt to vilify the staff because we don’t like their opinion.”

The most recent Gardiner incident was not the first time Ms. Keesmaat has rubbed the new mayor the wrong way.

Her advocacy for a downtown relief line subway, despite SmartTrack being Mr. Tory’s stated priority, has irritated the mayor’s office, sources said.

And at an event hosted by the Urban Land Institute in March and attended by hundreds, Ms. Keesmaat took to the microphone to correct Mr. Tory after the mayor answered a question onstage about the planner’s budget. After the mayor attempted to clarify his answer, she corrected him again, resulting in embarrassed laughter from the audience. 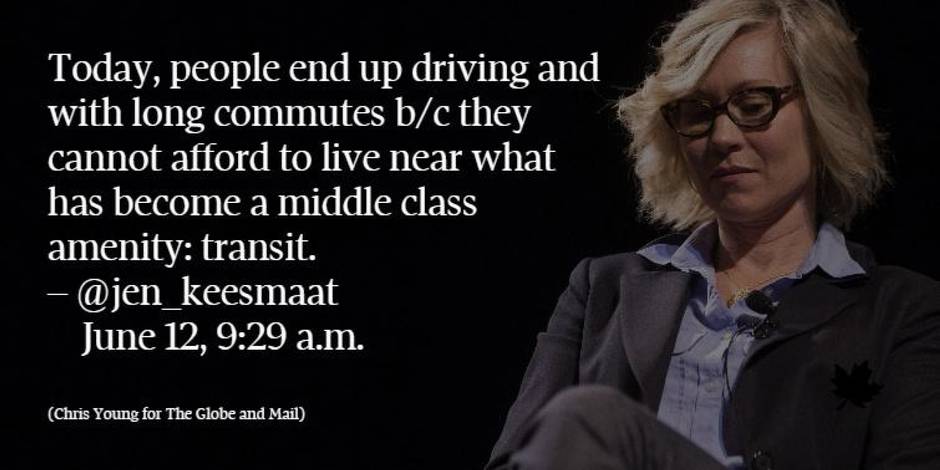 In light of Ms. Keesmaat’s recent silence, several councillors voiced alarm at what they view as the mayor’s attempt to muzzle city staff.

According to sources, bureaucrats were pressured by both sides – the mayor’s office and those lobbying for the “remove” option – leading up to the April release of a crucial environmental assessment on the Gardiner. Just one year earlier, staff had recommended removal. In this year’s report, “There is no preferred option being presented to council, which is very odd,” Councillor Paula Fletcher said. “99.9 per cent of the time, a preferred option is recommended by staff.”

“The Mayor has said it is perfectly appropriate for staff to make their opinions public, as Ms. Keesmaat has done,” she said in a statement. “However, it is equally important to respect the committee and council process while making these options public. Further, it is not appropriate for city staff to campaign against councillors or the Mayor on social media or through other public platforms.”

Meanwhile, at an urban planning conference this week, Ms. Keesmaat spoke onstage as a keynote panelist, giving her views on everything from walkable communities to development to the need for more transit. “I love the title of this panel,” she said – referring to the event called “If planners ruled the world.”

“I may have sounded a bit like I think the planner is a facilitator of city building. I wouldn’t want to leave you with that impression,” she said. “A planner is an expert. A planner brings expertise into the conversation.” Still, just moments later, when asked about her views on federal funding, she demurred.

“I can’t answer that question, because I’m a bureaucrat,” she said.