As Donald Trump and Xi Jinping prepared to meet for the first time this week, Jean-Guy Carrier was in Jordan, chatting up Middle Eastern financiers.

He had come to a conference of the Union of Arab Banks – a place that could hardly be farther from the nexus of power and diplomacy that Mr. Trump's Mar-a-Lago resort will become on Thursday and Friday. And Mr. Carrier, a former Canadian journalist who once covered the North by hitching rides on planes out of Churchill, Man., could hardly be more distant from the crowd of real estate tycoons and Communist Party elite who will gather in southern Florida.

Also: How will Xi Jinping handle a U.S President without a China policy?

Mr. Carrier is now executive director of the Silk Road Chamber of International Commerce, and he was in Amman to spread the gospel of China's "One Belt, One Road" project, with its ambition to spread Chinese money and influence far and wide. Invited by Palestinian billionaire Munib Masri, Mr. Carrier described how Chinese banks and government institutions can be partners and financial enablers for all manner of government spending projects, in Jordan but also in places as distant as Iceland, Kyrgyzstan and Mexico.

The Xi-Trump summit in Florida has been billed as a chance "to chart a way forward for the U.S.-China bilateral relationship," one that should be "based on a principle of reciprocity," a senior White House official said on Tuesday.

But China's leadership will arrive in Mar-a-Lago intent on using the stage with Mr. Trump to further cement the role it sees for itself as leading a new era of international relations and economic growth, on Chinese terms.

And Mr. Carrier's trip to Jordan arguably revealed more about Beijing's current agenda, aspirations and standing – and its ambitions in meeting Mr. Trump – than anything that will emerge from Palm Beach this week.

What Beijing is attempting is no less than "a 21st-century revival of trade," Mr. Carrier said in an interview. "China is clearly taking the lead in the global economy," he said. And it wants to take that place "from those who have been driving the world economy for the last 60 years."

The meetings in Mar-a-Lago offer Mr. Xi a chance to personally suss out the implications for China of Mr. Trump's "America first" mantra.

"If Trump is only going to be about domestic issues, that works for Mr. Xi," said Robert Daly, director of the Kissinger Institute on China and the United States at the Wilson Center in Washington.

"That's the fear in Washington – is the U.S. simply resigning from its global leadership?"

China remains economically far smaller than the United States. Its people are, on average, poorer, its military weaker and its corporate sector, with its large numbers of sclerotic state-owned firms, less globally influential than that in the U.S.

But where Beijing has now surged to the fore is in ambition. It has assembled a vision of a future where its government spending and corporate investments can together reinvigorate growth while also positioning China at the centre of the world's commercial landscape.

China's new approach is largely encapsulated in its One Belt, One Road project, a supersized Marshall Plan under which China expects to pour trillions of dollars into building and rebuilding all manner of priorities around the world.

Its ambition is sweeping: Take the Silk Road Chamber of International Commerce, which is backed by politically connected businessman Lu Jianzhong and fashioning itself into the publicity arm of One Belt, One Road – the term is used to describe a rebuilding of a new kind of Silk Road. By the end of this year, its leadership will have travelled to 50 countries. The chamber is building an "e-Silk Road" Internet portal to connect projects and investors. Plans call for it to function in 100 languages (the United Nations website has six language options).

"This is a new and important development," Mr. Carrier said. "And China is driving it."

While Mr. Trump is planning campaign-style rallies at home with cheering supporters, Mr. Xi is inviting global leaders to China for a pair of major summits this year, including one on One Belt, One Road.

"China hasn't had to do much. The other countries in Asia are already looking to them; Asian countries are going to invite China to be a full participant" in trade, he said.

Personality matters, too. Mr. Xi is a powerful emperor-like figure who is exceedingly cautious in public and backed by a sophisticated bureaucracy that has spent decades intensely studying the United States.

Mr. Trump's unpredictability, meanwhile, is accompanied by a lack of experience on China, both personally and among some of his top lieutenants. He has not formulated any concrete policy on China beyond his blustery tweets.

The danger for Mr. Trump is that he agrees to whatever Mr. Xi puts on the table without thinking it through, Mr. Daly said.

"The concern is not that he'll be overly bellicose in Mar-a-Lago and offend Mr. Xi. It's that he will try to make a deal before he is ready," Mr. Daly, a former diplomat, said in an interview.

The Chinese leader would like a positive statement from Mr. Trump on One Belt, One Road, Mr. Daly said. Beijing may also seek U.S. agreement to give China access to the American infrastructure projects Mr. Trump has pledged.

China can already point to evidence the Trump administration is acquiescing to its vision.

In mid-March, when U.S. Secretary of State Rex Tillerson came to Beijing, he referred to the need for "mutual respect" and "win-win" co-operation. Both are concepts central to China's vision of a world where other countries give Beijing a free hand to pursue its agenda.

In recent weeks, Chinese state media has revived talk of a "new model of great-power relations," excitedly pointing to Mr. Tillerson's comments as evidence of U.S. assent to language that China has carefully calibrated to serve its interests, particularly in muting foreign criticism of its policies in Taiwan and the South China Sea.

And in contrast with Mr. Trump's heated campaign rhetoric about China's "theft" of U.S. jobs, the United States is aiming for a meeting based on "co-operation and candour" with a "businesslike" tone, acting assistant secretary of state Susan Thornton said Wednesday. While Mr. Trump planned to push China to play a greater role in curbing North Korea's sabre-rattling, Ms. Thornton said, the central purpose of the summit was to "build up the kind of personal rapport we can rely on" between the two leaders.

Amnesty International, for its part, warns that there are risks to ceding too much of the international stage to China, a country that Mr. Xi is steering away from steady improvement on issues such as human rights.

"Xi Jinping will kind of look like the adult in the room [when he meets with Mr. Trump,] but that doesn't mean that this adult is good news," Amnesty's East Asia director Nicholas Bequelin said this week.

"The best-possible scenario here is that Mr. Trump and Mr. Xi ultimately decide to use this meeting to establish some kind of rapport," said Shahriman Lockman, senior analyst at the Institute of Strategic and International Studies in Kuala Lumpur. But if conversation turns to substantive matters, he worries that China will press its advantage.

"Through its sheer unpredictability and incompetence, the Trump administration is already letting China have a disproportionate share of influence in international relations – we didn't need this meeting to see that take place."

U.S. ratchets up urgency on North Korea ahead of meeting with China
April 4, 2017
Canada deports hundreds to China each year with no treatment guarantee
April 3, 2017
‘America First,’ from Ukraine to Africa: How Trumpism threatens democracy
March 12, 2017 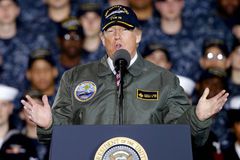