The U.S. plan to slap punitive new tariffs on steel and aluminum amounts to a "stupid trade protection measure," one of China's largest industry groups said Friday, as the world's second-largest economy confronted looming new barriers to its product across the Pacific.

China makes roughly half the world's aluminum and steel, and is a large exporter of both.

U.S. President Donald Trump on Thursday pledged 25-per-cent tariffs on imports of steel and 10 per cent on aluminum, an act that stoked trade-war fears and hurt markets across the globe. The Nikkei 500 and Hong Kong's Hang Seng Index both dropped 1.6 per cent Friday. Markets in Shenzhen and Shanghai also retreated, and analysts issued dark warnings about the consequences of hurting global trade sensitivities, and the revenge Beijing can take.

But China's vast metals complex reacted largely with a shrug to Mr. Trump's pledge to exact punishment for industrial overcapacity.

Though China's metal exports have surged in recent years as domestic demand slowed, just a sliver of those shipments land on U.S. shores. The U.S. is only the 26th-largest buyer of Chinese steel, importing just 1 per cent of China's exports last year.

China is the fourth-largest source of overall U.S. aluminum imports, supplying 9 per cent of the total (Canada is 42 per cent), according to data from research consultancy Wood Mackenzie. But China is the top foreign source of aluminum products such as sheets and foils into the United States, and the new tariffs will cause a "blow," said Kamil Wlazly, a senior research analyst with the firm.

"The unprecedented increase in imports of light- and medium-gauge foils from China over the past decade has forced many U.S. foil producers to delay investment or suspend operations," he said. In the U.S. "well-thought trade restrictions on imports of Chinese downstream products would encourage domestic demand and investment."

The Aluminum Association in the U.S. has argued that "subsidized production in China, which is leading to unfair and illegal trade practices, threatens the industry's continued health."

And the new tariffs "will have a negative effect on us, for sure, because it's a matter of cost," said Bai Qi, marketing manager at Huayu Hengmei Aluminum Ltd. Corp. in China's Henan province, which exports to the U.S.

"Our company has started considering new markets that can substitute for the U.S. We haven't come to any conclusion, but I think there will be many." For now, "things are running as usual," she said.

At Dongkuk Steel in Jiangsu, a client manager who gave only his surname, Zhang, was even more sanguine.

"The majority of the steel we produce is exported to South Korea. The share that the U.S. market accounts for is barely noticeable," he said. "So if it becomes difficult, we could just abandon it. It has no effect on our normal production."

The tariffs will merely cause the competitiveness of the U.S. industry to decline, argued the China Iron and Steel Association, which called the measures a "stupid trade protection measure" Friday.

They also risk provoking ugly recriminations from Asia. South Korean President Moon Jae-in in late February called for a "stern" response to any U.S. measures, threatening to complain to the World Trade Organization, or even to look for possible violations of the free-trade agreement between the two countries.

The tariffs Mr. Trump announced Thursday are less punitive than those once feared by South Korea – and the U.S. President may take solace in comments from South Korean steel maker Nexteel Co. Ltd., which told the Yonhap news agency that it has considered moving some of its production lines to the U.S. in response.

Still, Australian Trade Minister Steven Ciobo on Friday said Mr. Trump's move "will do nothing other than distort trade and ultimately, we believe, will lead to a loss of jobs."

In China, meanwhile, new warnings emerged about the revenge Beijing can take.

The U.S. risks "Chinese retaliation and a tit-for-tat trade war, just as the Tariff Act of 1930 did with dark consequences," wrote economic analyst Dan Steinbock in a lengthy commentary published by China Daily this week.

Top trade representatives from both China and South Korea are currently in the United States, hoping to blunt the blow before the tariffs are finalized.

"Exemptions for particular countries may be forthcoming," analysts with BMI Research wrote. But, it warned, "if implemented as announced, retaliatory measures from countries including China, Canada and Mexico could target U.S. industries ranging from agribusiness to aerospace and services."

Indeed, "we firmly oppose this action and will take responsive measures when it's necessary," said a senior official at the China Nonferrous Metals Industry Association, on condition of anonymity because he was not authorized to speak with the foreign press.

"Global trade is an interactive process. I think the Chinese government will take eye-for-an-eye measures in response," he said. "We won't just stay where we are after getting a punch in face."

With a report from Alexandra Li. 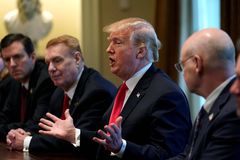 $300-billion in U.S. market cap wiped out as stocks plunge on Trump steel tariffs
March 1, 2018
Trump tweets: ‘Trade wars are good, and easy to win’
March 2, 2018
Follow Nathan VanderKlippe on Twitter @nvanderklippe
Report an error Editorial code of conduct
Due to technical reasons, we have temporarily removed commenting from our articles. We hope to have this fixed soon. Thank you for your patience. If you are looking to give feedback on our new site, please send it along to feedback@globeandmail.com. If you want to write a letter to the editor, please forward to letters@globeandmail.com.
Comments are closed