The Trump administration is pouring cold water on Canada's proposal for breaking the logjam over crucial auto-content requirements in the renegotiation of NAFTA – but is willing to keep talking.

United States Trade Representative Robert Lighthizer shredded Ottawa's proposed compromise on autos, arguing it would lead to less vehicle content made in North America and cause job losses in both Canada and the United States.

He also slammed Canada for its "massive attack" on U.S. trade laws in a sweeping World Trade Organization case filed earlier this month and said his country's deficit in the trade of goods with its northern neighbour is seven times greater than the U.S. government has previously calculated.

However, on the final day of the sixth round of talks on renegotiating the North American free-trade agreement, Mr. Lighthizer credited Canada for finally offering to deal on his top NAFTA demands and said he hoped there would be progress towards a revised pact over the next month.

"We finally began to discuss some of the core issues. So this round was a step forward, but we are progressing very slowly," he said at a joint press conference Monday with Canadian Foreign Minister Chrystia Freeland and Mexican Economy Minister Ildefonso Guajardo. "We will go where these negotiations take us."

In a later briefing for reporters, Mr. Lighthizer said Canada's willingness to compromise was "a reason for guarded optimism, but you know I'm never really that optimistic."

The three sides will reconvene in Mexico City in late February for a seventh round of talks; Ms. Freeland said a further session would be scheduled for April in Washington. The three countries are also progressing on less contentious matters, concluding a deal to add anti-corruption language to NAFTA and moving close to agreement on telecommunications, food safety and customs chapters.

The Trudeau government, which for months had refused to give any ground on Mr. Lighthizer's toughest protectionist demands, switched strategies for the Montreal talks in hopes of breaking the bargaining gridlock. In addition to the auto issue, Canada also offered compromises on Chapter 11 – a mechanism that allows corporations to sue governments in front of special trade panels – and on a process for amending NAFTA in future.

Canada's auto pitch revolved around changing the way North American content requirements are calculated on vehicles made in the NAFTA zone to include virtually everything, most importantly software development and new technologies for autonomous vehicles. The proposal would also allow auto manufacturers to receive credits toward their content requirement for building new assembly plants and expanding existing ones. Ottawa hoped to persuade Washington to back off its demand that all vehicles made in Canada and Mexico contain 50 per cent U.S. content.

But Mr. Lighthizer argued that adopting Canada's plan would simply allow automakers to fulfill their North American content requirement with work they are already doing in the NAFTA zone – such as marketing, research and sales – while moving manufacturing jobs overseas.

Ms. Freeland acknowledged that autos were currently the toughest sticking point in the deal, but vowed to find another way to break the impasse.

"That is a core issue. Possibly the most important and the hardest. We have been working really, really hard to understand what our counterparties are looking for," she said. "We're going to keep going … we're just going to keep working away at it."

"The best way to move autos forward is for [the U.S. Trade Representative ] to do what Canada and Mexico have committed themselves to over the past few months and that is meet with industry directly, which [the U.S.] hasn't done," Automotive Parts Manufacturers Association of Canada president Flavio Volpe said Monday after listening to the statements by the three politicians.

He also slammed Ottawa's WTO case, which attacks the U.S.'s system of slapping punitive tariffs on imports it deems are unfairly subsidized – ranging from softwood lumber to Chinese steel. Mr. Lighthizer said such an action only proved that his desire to do away with binding dispute resolution was warranted.

"It is imprudent and, my suspicion is, spiteful," he said. "It's such an abuse of the system, it shows the risk in this kind of a process."

Ms. Freeland, for her part, hinted that she was willing to strike a bargain to withdraw the case.

"I have a very clear response and a clear offer, which is: Let's sit down and let's negotiate a softwood lumber deal," she said. "I'm happy to start this afternoon." 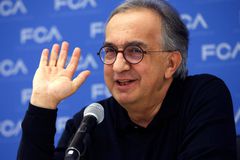 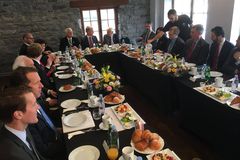 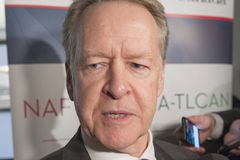