Four different parties have governed Alberta since it joined Canada as a province in 1905. The Wildrose Party has a shot at becoming the fifth on Monday.

Unique among Canadian provinces, Alberta politics feature governing parties being kicked out of office after very long stretches, only to be replaced not by the official opposition but by a new grassroots party. That's how the United Farmers emerged in 1921 to defeat the incumbent Liberals, how Social Credit won in 1935 and how the Progressive Conservatives were elected in 1971 (although the PCs had existed as a small party before). None had been the official opposition. All grew up outside the traditional party structure, challenged that structure and won. It's Alberta's way of giving vent to the democratic instinct for change. Now Wildrose hopes to follow the same path.

Normally, provincial elections don't much count in the national scheme of things, but this one could be different. Alberta is now so wealthy, in and of itself and by contrast to the rest of Canada, that the whole country will be affected by how it uses that wealth.

Moreover, Alberta is the heartland of the federal Conservative government. What Alberta thinks, how Alberta acts (or reacts), how it regards the federation and how fundamentally it views itself are consequential for Canadians everywhere.

Ontario, you might think, is the most important Canadian province. But Ontario is fiscally crippled and, as such, has turned inward. Quebec is a province apart, not much interested in the rest of Canada. B.C. is larger than Alberta, but it lacks Alberta's natural resource wealth. Saskatchewan is getting wealthier but lacks Alberta's population.

What Wildrose would do, if elected, might differ from what it has promised. Governing is tougher and more complicated than talking about governing. But if true to its word, a Wildrose Party could start demanding changes to national equalization so that Albertans would pay less into the scheme.

Equalization is a federal responsibility. So the Harper government could reject such demands. But they would be coming from the federal Conservatives' own heartland. (More than half of Conservative MPs are believed to be supporting Wildrose.)

A Wildrose government would certainly make the Harper government's greenhouse gas emissions-reduction target (down 17 per cent by 2020 from 2005 levels) even less likely to be achieved. Wildrose doesn't believe in human-created climate change and opposes Alberta's modest existing policies to reduce emissions. Any Alberta pullback would obviously make national progress more difficult, plus make Canada's already tarnished international image in this field even worse.

Wildrose Leader Danielle Smith has mused about looking east for a potential market for Alberta oil, which might mean talking to central Canadian provinces about taking (and refining?) oil. A delegation from Sarnia, Ont., recently visited Alberta to discuss such possibilities.

The Harper government, fixated on shipping oil (and other natural resources) to the United States and Asia, might have to pay attention to such a possibility, which has also been raised by Alberta Premier Alison Redford.

Wildrose has promised to put more fiscal surpluses into the province's Heritage Fund, whose assets are scandalously low given how much Alberta has made from its resources. When former premier Peter Lougheed ran Alberta, he tried to direct some fund investments at market rates to help less fortunate parts of Canada.

Would a Wildrose government contemplate such a policy? Or would the party prefer, as some Wildrose theoreticians have written, to build "firewalls" around the province – "firewalls" that would include pulling Alberta from the Canada Pension Plan to create a provincial one and ditching the RCMP in favour of a provincial police force.

The Progressive Conservative coalition has broken, with the reincarnation of Social Credit's early populism re-emerging in Wildrose, leaving PCs as moderate conservatives.

It's a modern replay of the old Socred-Progressive Conservative/Ernest (and Preston) Manning-Peter Lougheed splits and rivalries, since politics in Alberta are about differences within conservatism. Former premier Ralph Klein contained the splits, but as his grip faltered (and the province became more heterogeneous), the PC coalition fractured.

The playing out of the fracture on Monday will have an impact on the whole country. 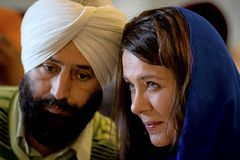 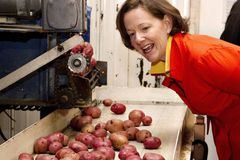 Undecideds could win the day for Alberta's Progressive Conservatives
April 18, 2012

Edmonton, Calgary up in the air as another poll shows tightening Alberta race
April 17, 2012