Carrianne Leung is the author of That Time I Loved You.

Around the time of the handover of Hong Kong in 1997, I remember hearing loud rumblings in my city that a popular bakery was about to go under. The next day, a swell of people showed up at its doors and started to line up to cash in their “cake cards,” a common gift between friends and families. Imagine the scene: a long snake of people numbering in the hundreds spread out along the street, just to redeem their bakery gift cards worth $5 to $20.

The English-language media – mostly made up of expat British folks – found this hilarious. The event became a kind of a joke to them, passed off as indicative of how petty Hong Kongers could be. The bakery line even made it into the English news as a silly fluff piece. It was an underlying tone of affection, indulgence and racial paternalism in the way local news was framed that I’d become familiar with over the years. The English media was quick to reduce whatever they couldn’t understand about Hong Kong’s people down to childishness.

But while the line seemed nonsensical to the Brits, it made all the sense in the world to me. I went down to that line and found a very Hong Kong scene: lots of gabbing and fun and conviviality between strangers in the united effort to get their lao po bang, a flaky winter-melon pastry and Hong Kong favourite that literally translates to “wife cake.” Hong Kong people do not like losing out, and in this case, they were not going to lose out on their cake even if it meant hours of waiting. In this lineup at the bakery, I didn’t see something to laugh at, but rather, of peace: There weren’t any fights, no one was mad or impatient and the mood was festive. Aunties and po pos had come prepared to camp out for the long run before they got their coveted cakes. They shared home-cooked food and segments of orange from plastic containers, passed each other buns and complained about their children while simultaneously one-upping each other about whose kid was in Canada or the United States, making lots of money.

There is something about the density of the city that is a different experience of space. I’ve lived in Toronto most of my life, but it’s still weird for me to see how a crowd here can send people into a panic and can bring arteries of the city to a complete halt. Meanwhile, in Hong Kong, more than seven million people share, move and live with each other in a tiny dot on the map with comparative ease. When each square kilometre in the city serves a density of more than 6,000 people, community is not something that has to be fostered to make happen; a sense of community – whether established like a neighbourhood or family and kin, or just as a fleeting thing such as a lineup for pastries – is simply part of daily life, because the necessary proximity to one another in our public spaces makes it so. With real estate at a premium because of the shortage of space, the very idea of home spills into the streets. Life is lived publicly and on full display.

Editorial: Hong Kong stood up to China. Now the free world should stand with Hong Kong

Hong Kongers in Canada seek to distance themselves from China

So when a million people marched through the streets to protest the Hong Kong government’s proposed bill that would allow extradition to mainland China – and then even more marched again, one week later in the face of violence, when the government’s half-measures failed to satisfy their demands – I saw the essence of Hong Kongers. They’re among the toughest, funniest and most tenacious people I know. They dig in and don’t let up until they get their due. And in the process, they create fun, joy, resistance and community. Yes, Hong Kong is also a very stratified and divided place, a capitalist dream with all its secret warts. There are huge divisions and tensions based on class, race, ethnicity, sexuality, gender and, in particular, status.

And yet, there is something about the place worth romanticizing. I can still identify a sense of kinship between people, a duty to one another, a collectivity that defies the brand of liberalism that centres on the individual. There is still an enduring character there that reminds me of stories my mom told me: how my great-grandfather rallied his neighbourhood to survive the Japanese occupation, the “riots” against British colonialism in 1967, the strong presence of the democracy movement in the period before and after the 1997 handover, the annual mass turnout to remember Tiananmen on June 4 in Victoria Park, the youth-led Umbrella Movement in 2014. And now, Hong Kong has risen again to show itself to Beijing.

When I think about the history of my people, fighting for the recognition and security of their civil rights, I remember the lessons of that cake line. The West may only understand protests in the ways they happen in North America, but this is why Hong Kongers are often underestimated. In marches and cake lines, we can see a shared sense of identity that comes from having to continually ensure they get what is theirs. There is infinite patience, but also a burning fire.

The images that endure for me are the faces of my people leaving the bakery with their pink boxes of cake and victory grins, waving goodbye to their comrades who were still waiting in line, but certain that they were moving ever closer to their goal. 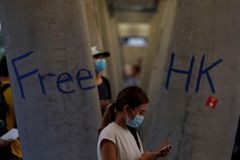