I was in Paris last week, wandering along the Seine on a sunny spring morning, when my eyes happened upon its spire and twin towers. And so, I succumbed to the selfie impulse, capturing a near-perfect moment for times when life isn’t so sweet.

The spire is gone now, and, depending on your perspective, it is only due to divine intervention or the bravery of the Paris firefighters that the towers are still standing at all. They were frighteningly close to turning to rubble. Imagine France’s grief had they indeed crumbled.

The worst has been avoided, French President Emmanuel Macron told his compatriots after rushing to the scene of the fire on Monday night. Yet, that has not stopped all of France from feeling an inconsolable sense of loss, as if a part of every French patriot went up in smoke.

That the grief has overtaken the religious and non-religious alike is understandable. Notre-Dame de Paris is a monument that leaves no one unmoved. It is a symbol of French continuity and ingenuity. It is an ode to art and beauty, almost as much as it is to God.

Yet, the cathedral itself is no innocent bystander to history. It has been at the centre of France’s bloody religious wars, which go back centuries to the struggle for the French crown between Protestants and Catholics. They reached their zenith with the French Revolution, which packed a double-whammy by overthrowing both the Catholic Church and the king.

Between the Revolution of 1789 and Napoleon Bonaparte’s rise, France underwent a dechristianization during which all church assets were seized by the state. Clergy who resisted faced the guillotine. Notre-Dame de Paris itself was converted into a “temple of reason” devoted to the propagation of Republican ideals – liberté, égalité, fraternité. The Concordat of 1801 between Napoleon and Rome restored somewhat the church’s privileges – though bishops henceforth took their orders from the emperor, not the Pope – until the 1905 Loi concernant la séparation des Églises et de l’État made state secularism the law of the land.

Known in France (and more recently in Quebec) as la laïcité, the French concept of secularism is unlike any other and remains politically contentious. While the Muslim head scarf was banned in French public schools in 2004 in the name of la laïcité, early proponents of French secularism had the Catholic Church in their sights. That, in part, is why Mr. Macron’s impassioned vow to rebuild Notre-Dame was actually a pretty cheeky move.

In France, the President is supposed to embody the Republic. And the Republic recognizes no religion. Hence, it did not go unnoticed that Mr. Macron stood outside Notre-Dame on Monday night and declared that his “first thoughts” were “for the Catholics of France and everywhere around the word.” He added: “I know what they are feeling and we are with them.”

While the exceptional circumstances no doubt justified his comments, it was nevertheless disarming for Republican purists to watch a French President so unabashedly take it on himself to rebuild a Catholic cathedral. But it was not the first time Mr. Macron has reached out to French Catholics, who remain a powerful and highly organized political constituency. Last year, he became the first president in recent memory to address French bishops, declaring his desire to “repair” the “damaged” link between the church and the French state. It earned him a stiff rebuke from the leader for the far-left France Unbowed, Jean-Luc Mélenchon, who tweeted: “The link between church and state has no reason for being. Macron is going too far. It’s irresponsible."

That same day, Mr. Mélenchon also tweeted at Nathalie Loiseau, the lead candidate for Mr. Macron’s party in next month’s European Parliament elections, who had included mass on Palm Sunday on her official agenda. Mr. Melenchon, called it an “opportunistic” courting of Christian voters that “trampled on” la laïcité. Ms. Loiseau quickly scratched the item off her official itinerary but attended mass anyway.

Unlike his Monday night comments outside Notre-Dame, which appeared to be impromptu, Mr. Macron steered clear of all religious references in his Tuesday evening televised address delivered from the presidential Élysée Palace. Just as some commentators found it jarring for a French President to acknowledge Notre-Dame’s religious vocation in his Monday comments, others found it even stranger that he spoke only in the vernacular on Tuesday night.

Such are the contradictions of French secularism. No matter that barely 5 per cent of French Catholics regularly attend Sunday mass, or that the church itself is held in low regard by most, the entire country has united around a monument to its enduringly Catholic identity. 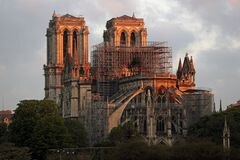 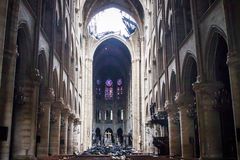 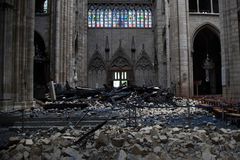