If you caught Anderson Cooper’s interview this week with Las Vegas Mayor Carolyn Goodman, you were treated to a tour de force of non sequiturs that likely left your head spinning. The host of the eponymous CNN show called out Ms. Goodman for being “ignorant” and “irresponsible” for wanting to end the coronavirus shutdown that has crippled her city’s economy.

“I get the financial losses people are suffering, which is awful, but you’re encouraging, I mean, hundreds of thousands of people coming there in casinos, smoking, drinking, touching slot machines, breathing circulated air, and then returning home to states around America and countries around the world,” Mr. Cooper said. “Doesn’t that sound like a virus petri dish?”

Ms. Goodman, who is 81 and no shrinking violet, in turn accused Mr. Cooper of being “an alarmist.” The world we live in is full of risks, viruses among them, and we cannot put the economy on hold because of it, she seemed to be saying, though it was hard at times to know exactly. “A neighbour of mine died of West Nile,” she said, apropos of absolutely nothing.

Still, the spectacle – it was not really an interview, after all – provided a perfect illustration of the polarization in American society that has doomed all serious debate over how to deal with COVID-19. The closing of the American mind is apparent on both sides of the political divide and the pandemic has become just another excuse for cable news hosts to exploit it.

“Are we watching a flu d’état?” Fox News host Tucker Carlson quipped this week. “The press should get to the bottom of it. But they’re not. They’re cheering on the repression.”

Mr. Carlson was apparently referring to Facebook’s move to prohibit “events that defy governments’ guidance on social distancing” from being posted on the social media platform, preventing its members from publicizing the end-the-lockdown protests that have been springing up across the country in recent days. Those are the same protests that Republican President Donald Trump has promoted on Twitter, with calls to “liberate” the Democratic-led states that have issued the most extensive stay-at-home orders.

It would be wrong to dismiss these protesters as simply as ignorant pawns – the coronavirus equivalents of climate change deniers – in a political scheme concocted by deep-pocketed organizations on the right to rig the 2020 election in Mr. Trump’s favour. Millions of Americans are, indeed, suffering incalculable financial losses because of stay-at-home orders aimed at “flattening the curve.” Millions may never get their jobs back, their livelihoods forever lost.

The economic costs of the shutdowns are not being shared equally. Working-class Americans feel they are once again getting the short end of stick, for reasons that many of them simply do not buy. The political ramifications of the shutdowns ordered by state governors could define the 2020 elections, especially as the people most likely to favour an extension of social distancing measures for weeks or months tend to be those who are least hurt by them financially.

Unfortunately, you cannot tell people to simply follow the science. So much remains unknown about the novel coronavirus that it is impossible to assert that economic shutdowns will ultimately minimize the number of deaths it causes. There is no doubt that social distancing measures have slowed transmission of the virus, thereby preventing most hospitals from being overwhelmed. But no one knows whether that will reduce the virus’s toll in the longer term.

Sweden’s experiment in allowing schools, restaurants, parks and shops to remain open may look wise, if it leads to faster herd immunity than in other countries, especially if an effective coronavirus vaccine takes years to develop. But no one can know for sure until widespread antibody testing is available to determine just what percentage of the population has been infected with the coronavirus but remains asymptomatic. Only then can the true fatality rate be calculated, and policy adjusted accordingly. Until then, decision makers can only use their best judgement.

“I never imagined having to use the levers of my office this way to protect the people I serve,” Michigan Governor Gretchen Whitmer wrote this week in a New York Times op-ed. “Each action taken weighs heavily on me. Each action has been informed by the best science and epidemiology counsel there is. These choices have been tough. They haven’t always been popular. And we will never know precisely how many lives were saved as a result.”

That is one of the more honest declarations made by an American politician during this crisis. Too bad it, like everything else these days in American politics, gets twisted beyond recognition. 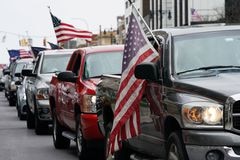 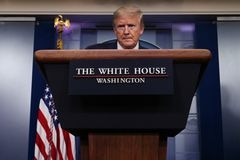 Tension mounts in U.S. over plans to reopen the economy as Trump appears to encourage protests
April 17, 2020 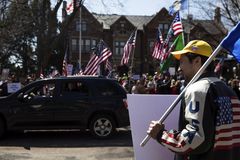