Having never seen LeBron James play basketball, I picked a good night to do so. Last November, his Cleveland Cavaliers came to the U.S. capital. Tickets were $250 for a good seat, but how often do you get a chance to see phenoms?

I didn’t regret the price. In one of his men-against-boys productions, the King poured in 57 points that night. He shattered defences, moving to the hoop with cunning one moment, with cannonball force the next.

He played on the opposing team. But not only did the predominantly black audience roar its appreciation, the beer-drinking white guys did as well.

This was no surprise, just a small illustration of how sport transcends the colour divide in this country. It’s seldom noted how sport, at least until Donald Trump came along, played such a pivotal role in racial integration. Politicians get the credit. It’s the black athletes who deserve it.

Sporting prodigies brought the black population self-esteem. From the white population they brought respect, elevating the image of African-Americans and playing a large role in creating the conditions for civil rights.

Recall the impact of Jesse Owens on American pride in the 1936 Nazi Olympics in Berlin; the role of Jackie Robinson in integrating baseball; the majesty of Arthur Ashe on and off the tennis court. Consider Bill Russell, Althea Gibson, Muhammad Ali, Kareem Abdul-Jabbar, Hank Aaron, Magic Johnson, Tiger Woods.

Mr. Woods competed in the Quicken Loans National tournament here in Washington last month. The spectators, as is typical for golf tournaments, were 95-per-cent white. But they jammed every hole he was on, leaving the rest of the course practically empty, the other competitors alone. Despite Tiger’s checkered past, they wanted only to see him. Colour was meaningless.

The Trump presidency is changing this. Instead of being a force for racial equality, black athletes are being disparagingly targeted for the purpose of political gain. Mr. Trump is playing to prejudices to drive up the support of his white nationalist base.

His tweet last week berating Mr. James’s intelligence was the latest manifestation. “Lebron James was just interviewed by the dumbest man on television, Don Lemon,” Mr. Trump wrote. (Mr. Lemon is also black.) “He made Lebron look smart, which isn’t easy to do.”

Could we imagine Dwight Eisenhower back in his time putting out a release saying Jackie Robinson was dense?

The Trump insult came almost exactly a year after his failure to single out or denounce white supremacists marching in Charlottesville, Va. Then came his attacks on black football players for taking a knee during the national anthem. He instructed a team owner in one case to "Get that son-of-a-bitch off the field right now.”

Mr. Trump gives the impression of wanting to play to the old disgraceful stereotype of black people being mentally inferior. He’s called California Congresswoman Maxine Waters, one of his many harsh critics, “an extraordinarily low IQ person.”

Of the Lemon-LeBron tweet, ESPN’s African-American commentator Jemele Hill wrote: “There’s a lot of insults the President could have hurled at LeBron and Don Lemon, but it says something that the President openly questioned their intelligence. Gee, wonder why.”

Mr. Trump targets white people as well as blacks and immigrants with his IQ insults. But anyone following the thread can detect a lean.

On Mr. James, even first lady Melania Trump took issue with the President’s words, putting out a statement in support of the player’s sublime talents and all the good work he does.

This President’s put-downs of black athletes won’t appeal to most whites. But they stoke the prejudices of the hard right who support him with mob-like fury at rallies. They’re in the corner with Fox News commentator Laura Ingraham, who advised Mr. James following one of his criticisms of the President to “shut up and dribble.”

The upshot is an African-American population with even more reason to be bitter, with Mr. Trump further stoking racial intolerance.

For all its scandals, its drug problems and its other taints, sport has been a trailblazer in bringing the races together in America. Now this President scales new believe-it-or-not heights in using sport to drive them apart.

Trump and the black athlete: Witnessing one of the oldest and ugliest tropes in U.S. history
August 6, 2018 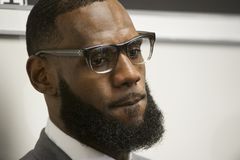 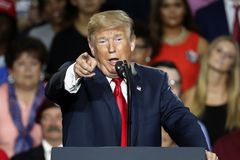