Canada has the world's longest coastline, the second-largest land mass and an enviable abundance of fresh water. Thus, by definition, the consequences of atmospheric warming must hit Canada arguably more than for most countries that lack vast territory, immense coastlines and so much fresh water.

Put another way, this piece of geography called Canada is on the front lines of the global warming struggle - although you wouldn't realize it watching the federal government.

The effects of atmospheric warming on Canada are already apparent. Every sentient Canadian must have seen or heard about the disappearance of Arctic ice cover. You can argue that sunspots cause this phenomenon, or that this de-icing is normal, but you'd be with the fringe disbelievers in climate change.

The pine beetle is nothing new. It's struck before, but it was always killed off by the very cold winters made much rarer by atmospheric warming. There's been none of that kind in recent years, so the pine beetle has enjoyed immunity - and caused untold damage to ordinary people and their communities.

The glaciers in the Rockies, meanwhile, are shrinking. As they do, so will water flows across the Prairies, with consequences for farmers and cattlemen.

In Australia a decade ago, farmers and their lobbies were among the most insistent opponents of doing anything about climate change. Now, as their lands have dried out in what Australians call the Great Drought, they've become the most insistent for action. One day, perhaps, farmers will put two and two together and realize their lands are on the front lines.

Salmon has disappeared on the Pacific Coast, cod on the Atlantic one. No one knows precisely what led to their disappearance, but scientists have noted changed water temperatures that might have been a contributing factor.

Studies in Ontario and Saskatchewan have shown that lakes are freezing later and thawing earlier. Lower rainfall patterns change the rates at which water flows over hydro dams. Building projects in the North must be compressed because tundra remains frozen for shorter periods of time.

These are examples of how Canada's geography is being affected by climate change. These effects will intensify over time because warming, by definition, occurs slowly.

A while back (John Baird was still environment minister), the Harper government asked scientists to study adapting to climate change. Dozens of them produced a volume for just about every province, offering a fascinating look at what's happened, geographically speaking, and what plausibly might happen.

Predictably, the government made the material available online on a Friday afternoon with almost no publicity. Predictably, because then, as now, the government wants to draw as little attention to climate change as possible and to do as little as it can get away with in comparison to other advanced industrial countries.

This is why Canada's eventual reduction target - not the one in the window at the Copenhagen conference - will be the most modest in the industrial world and why the Canadian public investments in green changes were the lowest in the recent stimulus packages worldwide.

Canada has challenges in confronting emissions that many comparable countries do not. It's colder and bigger and, before the recession, enjoyed economic and population growth that eclipsed that of other countries (except the United States).

Provinces control natural resources, and that makes national policy difficult. Canada is a big fossil-fuel producer, with an abundance of two of the most polluting fuels: coal and tar sands petroleum. Politically, there remain quite a few climate-change deniers (including in so-called serious newspapers) that cluster disproportionately among Conservative supporters.

Canada, therefore, is conflicted. Its geography will be affected by atmospheric changes, but that same geography produces fossil fuels that make people rich and drive the economy. Canadians tell pollsters they want "action," but not if it unduly causes them to alter their behaviour or costs them anything. They want Canada to enjoy a stellar international reputation, but they don't seem too upset that, in the climate-change business, Canada has a horrible reputation that the Harper government isn't going to change.

Opinion
Climate change is not weather change
May 9, 2018

Opinion
The government should have hugged Colvin, not demonized him
May 8, 2018

Opinion
If you really want a coalition, do it the German way
May 3, 2018 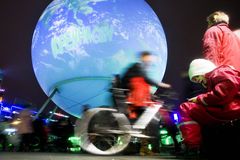 Opinion
Judge the government's emissions targets by its exit strategies
May 8, 2018