Turning away from trauma is a common instinct. When bad things happen, many of us try to bury the pain, shame and mental scars, hoping they'll just fade away.

Whether after an individual death or larger tragedy, the pattern is familiar. After receiving an initial outpouring of well-meaning sympathy, those most bereaved are gradually abandoned. It's too much to acknowledge the true depth of their suffering, and the reality that it might never end.

This is what I see happening in the wake of last year's shooting at the Centre Culturel Islamique de Québec (CCIQ), when six men were killed on the evening of January 29, 2017. The nation was shocked, for a minute. Politicians pontificated about standing up to hate.

Read more: At the Quebec mosque shooting, this man risked his life to save others. Who will save him now?

Then, slowly, most of us backed away. The Quebec City community is still reeling, but Canada has moved on.

No politicians visited Aymen Derbali in all of 2017. The 41-year-old father of three was paralyzed after purposely getting shot in order to save others. The Muslim non-profit Dawanet has raised almost $300,000 to help make his home accessible, but as of now, he's still in rehab.

Mr. Derbali is a hero. It's hard to believe that Prime Minister Justin Trudeau or Quebec Premier Philippe Couillard couldn't just pick up the phone and call.

Instead, Mr. Couillard has avoided suggestions that Jan. 29 be marked as a day of remembrance to combat Islamophobia. He preferred, in October, to speak in favour of Bill 62. The "religious neutrality" law included a provision against face-coverings aimed at the province's niqabis, as though highlighting that tiny minority as less deserving of public services was in any way a neutral act.

What an irresponsible stoking of the xenophobia smouldering across Canada – including Quebec. While the face-covering ban has been delayed by a judge, it's just one egregious example. Another is that police in Quebec City say hate crimes targeting Muslims doubled in 2017.

In August, not even a year after the mosque attack, CCIQ's application to build a Muslim cemetery was protested by the right-wing anti-Islam group La Meute. Less than two days after the site was approved, the car of mosque president Mohamed Labidi was set on fire. It exploded outside his house.

We look away from tragedies because they hurt. The six men who were killed – Azzeddine Soufiane, Khaled Belkacemi, Ibrahima Barry, Mamadou Tanou Barry, Abdelkrim Hassane and Boubaker Thabti – are never going home.

But we also look away because we're afraid. Wondering how and why such a monstrous act could happen, it seems likely that the ugly responsibility might have to be shared.

As the anniversary of the massacre approaches, Canada's Muslims are asking for our attention. Dawanet has also just released Your Last Walk in the Mosque, a documentary about coping in the aftermath.

Widows keep their faces in the shadows, out of fear of retaliation, while Mr. Derbali speaks in barely audible, gasping breaths. One last, lingering shot is of the dead men's shoes, still sitting on the racks outside the prayer room. It's a slow, unflinching examination of a community's pain.

Screenings begin Jan. 25 in Mississauga, Ont., and are scheduled around the country, including at the Université Laval, where suspect Alexandre Bissonnette studied.

There's also the emerging hashtag #SouvenezVous29Jan, or #RememberJan29. Campaign co-founder S.K. Hussan says he wants Canadians to connect with the tragic moment through personal memories, asking "where were you when it happened?" the way they might about 9/11 or a celebrity's death.

"It's a very specific form of structured forgetting that's happening," says Mr. Hussan of Canada's collective memory loss. "This is the largest political mass shooting in 25 years, it's a historic moment, not a one-off tragedy."

Yet in the hours after the attack, Public Safety Minister Ralph Goodale quickly labelled the suspect a "lone wolf," a clear instance of the knee-jerk instinct to push unsightly messes out of sight.

Labelling white male shooters as individual actors is easier than grappling with historic racism, or the immigration, border-crossing and terrorism policies that mark Muslims as worthy of suspicion and dread.

This is a truth-telling moment, though – and many are acknowledging that suppressing trauma isn't a permanent cure. The main reason to remember Jan. 29 is to try and ensure it doesn't happen again. 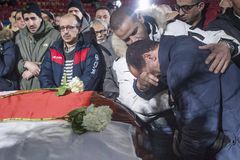